Millions of Americans are going down a dangerous slope with their retirement savings.

More than one in four employees with 401(k) or other retirement accounts are tapping into those funds to pay mortgages, credit card debt and other bills, financial advisory firm HelloWallet said in a new report out this week.

Most of those dipping into their retirement funds before age 59½ are doing so because they are struggling to get by. American families average only $4,000 in savings accounts.

But dipping into retirement savings comes with a heavy price - and many of those who do so fail to realize the consequences, including IRS penalties and income tax on early withdrawals as well as any taxes on investment gains.

"Workers are now broadly voting with their wallets and demonstrating that they need retirement savings for non-retirement needs, in spite of the large, punitive penalties that are associated with most of that withdrawal activity," HelloWallet said in the report.

Who's Tapping Into Retirement Savings Early?

Those most likely to take money out of their retirement savings early are in their 40s, have net wealth averaging $63,000 and live in households that earn less than $50,000. They're also more likely to use revolving credit instead of paying off credit card bills in full monthly.

Those with a college degree also are less likely to tap into a retirement savings account than those without a degree, the HelloWallet report said.

Funds can be taken out of the accounts before age 59½ through loans in amounts up to $50,000 or half the account value, whichever is smaller, for which borrowers must pay interest, as well as through "hardship" withdrawals and through cash-outs when an employee leaves a job. The withdrawals and cash-outs are subject to income tax and the IRS penalty. 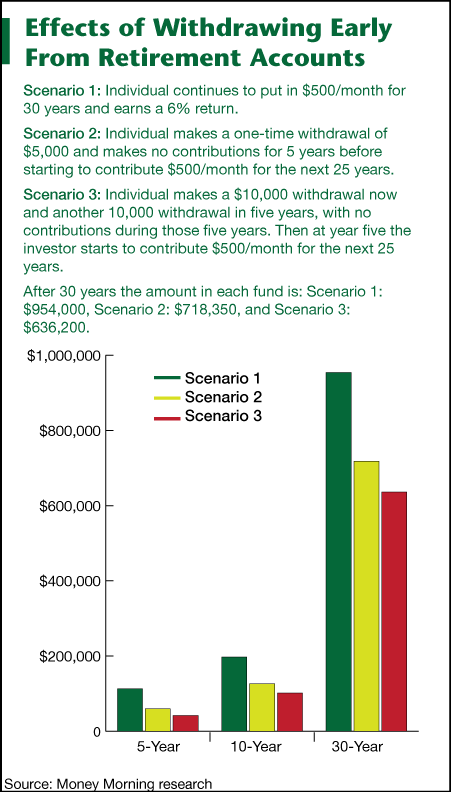 Taking money out of retirement accounts early runs counter to their purpose - to help workers prepare financially for retirement.

The early withdrawals are part of a developing "retirement crisis" in the United States, as companies have cut back on retirement account contributions and pension programs have declined markedly.

All told, 37.9 million U.S. households contributed $175 million to 401(k) and other retirement accounts in 2010, the latest year for which statistics were available, while employers contributed only $118 million, the report says.

"We're going from bad to worse," Diane Oakley, executive director of the National Institute on Retirement Security, told The Washington Post. "Already, fewer private-sector workers have access to stable pension plans. And the savings in individual retirement savings accounts like 401(k) plans - which already are severely underfunded - continue to leak out at a high rate."

At the same time, federal policymakers are considering cuts to Social Security and Medicare, long staples the elderly have relied on in retirement. That makes retirement savings account funds that much more important to supplement the entitlement programs.

In fact, The Post reported a U.S. Senate committee found nearly 6 million senior citizens were living in or near poverty in 2010, and the number is expected to rise.

"Encouraging or enabling people to spend down retirement money in anything other than the most severe circumstances is a terrible mistake," David John, a senior fellow at the Heritage Foundation who studies retirement policy, told The Post.

This is important information. But I want to call to the attention of baby boomers and anyone planning retirement or recently retired that emotional planning is important too. Going from a full time job to no job may seem ideal, but it is an enormous and difficult adjustment. Too many retire people end up feeling useless, with no purpose. Many suffer from episodic depression as a result, making what could be the best time of their lives, the worst time. Prepare yourself by finding a passion to pursue during retirement.

As long as Social Security pays even a small amount it would be possible to survive. You can always live on BLM land in a used RV and eat beans.