An interesting study published in Science recently found that people frequently underestimate their future selves. When asked to score their current preferences, values and personality traits compared with how they felt

It didn't matter whether the participants were teenagers or middle-aged; people just assume that their present selves are "as good as it gets."

Investors have held a similar illusion about the stock market since the financial crisis.

With the barrage of negative headlines and abhorrence toward risk, investors seemed to feel that equities would not improve going forward.

This turned out to be a mistaken belief: Take a look at the last four years of U.S. market and gold returns.

Since the beginning of 2009 through the end of 2012, gold had a cumulative total return of nearly 90 percent. The S&P 500 Index also had a dramatic climb, with a cumulative return of more than 70 percent. In comparison, the iShares Core Total US Bond ETF increased only 22 percent on a cumulative basis over the same time frame. 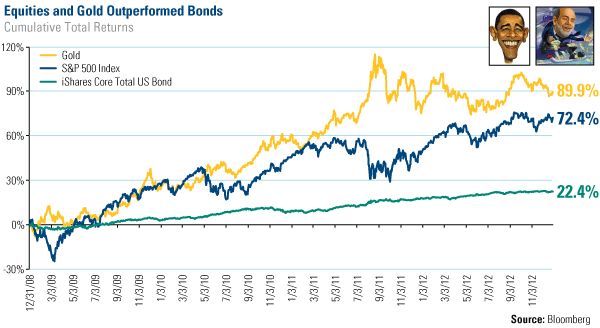 As I explained in our Outlook Webcast, stock and gold investors should thank President Barack Obama and Federal Reserve Chairman Ben Bernanke for these phenomenal results, as the Fed has been on a massive bond-buying frenzy during its three rounds of quantitative easing and Operation Twist.

This spree has pushed the central bank's balance sheet to nearly $3 trillion, reports the USA Today. The newspaper says this is "more than three times the size of the Fed's holdings before the financial crisis" in the fall of 2008. 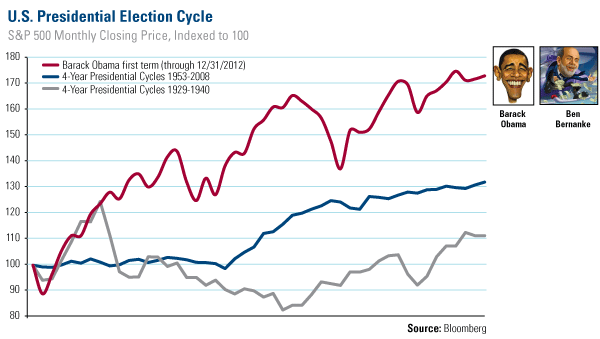 The bad news is that many investors have not been participating, as they have acted on the belief that negative short-term headlines equate to dismal long-term equity performance. We've frequently discussed how billions of dollars have been yanked out of the perceived "risky" equity funds into purportedly safe havens, such as Treasuries and bond funds. The chart below shows the continuation of this extreme behavior since 2006, which is the move costing these investors big-time.

In the media's duty to report risks facing the average investor, some reporters seemed to have overlooked what I believe to be the greatest threat. As Bloomberg only recently quantified, "Americans have missed out on almost $200 billion of stock gains as they drained money from the market in the past four years."

To be fair, year-end reporting has brought to light the considerable equity gains. Bloomberg Businessweek explained how "Five Brutal Years Teach Investors to Sit Tight," highlighting several investment gurus, including Vanguard's Founder Jack Bogle and Josh Brown of The Reformed Broker blog, who wrote about the wisdom of those investors who held tight to stocks.

Just recently we received an olive branch indicating that the bond fund flows may be receding and reverting back to equity funds. CNBC reports that during the week ended January 9, $22 billion flowed into long-term equity mutual funds and exchange-traded funds, according to data from Bank of America Merrill Lynch. This amount "was the second-highest amount on record," writes CNBC.

One week of data, though, does not make a trend. Research shows that retail investors may continue selling their U.S. equities through 2013.

According to Goldman Sachs, an estimated $475 billion is expected to leave stocks. On the bright side, the "smart money"-corporations who are engaging in mergers & acquisitions activity as well as buying back shares of stock-are expected to purchase $450 billion, says Goldman Sachs.

In addition, institutional investors, including mutual fund companies, foreign investors, ETFs, life insurance companies and pension funds, are expected to put an additional $225 billion into the U.S. equity market in 2013.

Another Olive Branch for 2013?

Over the past year, gold stock investors have been fleeing the sector after seeing declining returns throughout the year. As of December 31, 2012, the FTSE Gold Mines Index declined nearly 14 percent over 2012. We've seen this pattern before, as gold stocks have historically performed poorly during a U.S. presidential election year. This is data going back nearly 30 years. 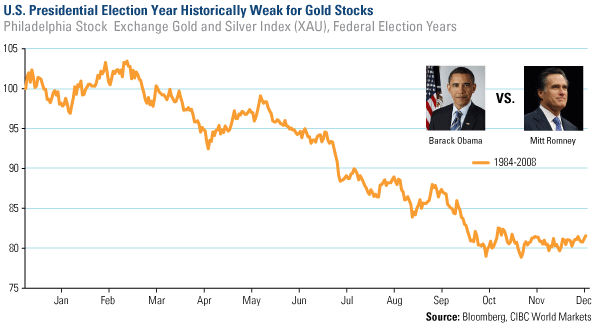 However, the math suggests gold stocks may stage a significant comeback during 2013. Historically, during post federal election years, the Philadelphia Stock Exchange Gold and Silver Index has seen significant gains. 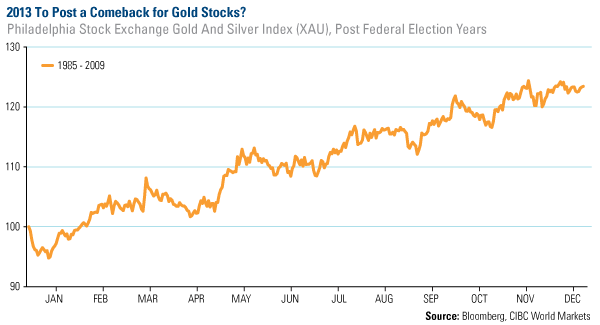 It's not only the seasonal aspect that drives our bullish opinion toward gold stocks. If you have not downloaded it yet, I encourage you to read our Special Gold Report that discusses the significant improvements that gold companies have made over the past year.

Investors' misconception about future stock returns underscores why I frequently point out cyclical patterns and seasonal cues. I believe these trends help investors anticipate the performance of global markets and commodities before participating.

For the new year, I challenge all readers to fight off the negativity, see long-term opportunity in global equity markets and, most importantly, remain invested. Your future self may thank you.