Despite the Fukushima disaster in March 2011, the demand for nuclear power continues to rise.

For uranium investors, that means the commodity is at a critical tipping point towards much higher prices.

Thanks to considerably higher energy costs, even Japan is now shifting its stance on nuclear power. According to Japan Today, newly elected Prime Minister Shinzo Abe now says he is willing to build new nuclear reactors.

That's a dramatic shift from the previous government's pledge to phase out all of the country's 50 working reactors by 2040.

But the most significant impact in nuclear power is likely to come from the developing world-especially China.

China's commitment to nuclear power means they could be adding as many as 100 nuclear reactors over the next two decades. That's a monumental shift considering China currently operates only 15 reactors.

Other nations such as Russia, India, South Korea, and the UAE are contemplating new nuclear power plants as well that would add to the 435 nuclear reactors already providing base-load power worldwide.

In this year alone, 65 nuclear power plants are under construction, another 160 new reactors are currently in the planning stages and 340 more have been proposed.

Given this ongoing shift, the demand for uranium is clearly going to be getting stronger, which presents a problem since there is already a uranium supply deficit.

According to the World Nuclear Association, total consumption of uranium was 176.7 million pounds in 2011 and growing. Meanwhile, last year's total uranium output was 135 million pounds. That's an annual deficit of roughly 40 million pounds.

Of course, you know what happens when supply can't keep pace with demand--- uranium prices will begin to rise.

But that's only part of the story. Thanks to the end of a program called Megatons to Megawatts the supply deficit promises to get even worse.

Created in the wake of the cold war, the Megatons to Megawatts program is an agreement between the U.S. and Russia to convert highly-enriched uranium(HEU) taken from dismantled Russian nuclear weapons into low-enriched-uranium (LEU) for nuclear fuel.

The existence of this program alone bridges a large portion of the worldwide annual deficit, with 24 million pounds of uranium going to American utilities. In years past, up to 10% of the electricity produced in the United States has been generated by fuel fabricated using LEU from the Megatons to Megawatts program.

Unfortunately, the program will expire toward the end of 2013.

And if the Russians decide not to renew the agreement--and that's the general consensus at least here in the West--there will be a uranium shortfall of 50 - 65 million pounds annually worldwide.

What's more, just counting the reactors currently under construction, it's expected that demand will increase by 13%, pushing up annual consumption to 200 million pounds. And I'm not even accounting for any reactors in the planning stages.

The problem is some experts think we may only see as much as 180 million pounds of annual uranium output by 2020. And it's estimated that spot prices need to reach and stay around $70 - $80 for miners to be willing to bring on new projects to reach that 180 million pound level. 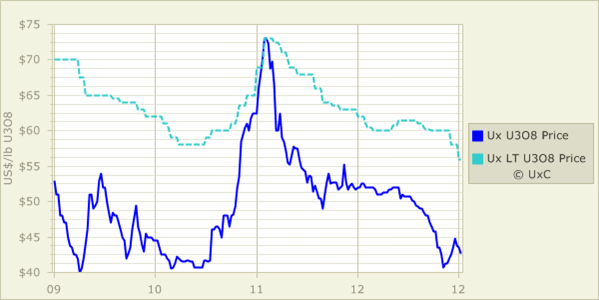 So there's very little incentive at current prices for new projects to be brought online since average production costs are typically in the $85/lb. range. Obviously, this situation can't last.

Producing something at twice its selling price is going to cause a lot of production to simply come off the market. Sure enough, in recent months scores of supply projects have been shelved thanks to persistently low uranium prices.

As a result, it now seems pretty clear that uranium prices will have to move up in an important and sustained way for new production to make it to market.

The good news for investors is that we may be reaching the end of this downward cycle. I expect the spot uranium price could well rise to the $70 range within the next 12-18 months. Here's why...

When Japan promised to shut down its 50 nuclear power plants, they erased 20 million pounds of nuclear fuel demand, and exacerbated the pricing situation by simultaneously selling 15 million pounds into the market.

Now those sales may have finally worked their way through the market, stabilizing the spot price.

The Catalyst for Higher Uranium Prices

What's been missing is a catalyst to get uranium and its producers to put in a bottom and reverse course.

Well we could have exactly that, and ironically from above all places, Japan.

You see, Japan's current power grid, without nuclear power, has been experiencing rolling blackouts. Natural gas imports have risen 17%, and even coal imports are up 21%.

Now a landslide win by the pro-nuclear Liberal Democratic Party seems to have provided just the catalyst the nuclear power industry needs.

Its capacity is likely to climb to 40 million kilowatts from nuclear by 2015, compared to 12.54 million at the close of 2011. Clearly, China will need to build several more reactors and acquire a lot more uranium, which they've apparently been doing in the spot market recently. (courtesy of Japan, perhaps?)

As a result, industry insiders have begun making strategic moves since a number of uranium equities appear to have bottomed in the last few months.

For instance, earlier this month Russia's state owned Atomredmetzoloto and its Effective Energy N.V. affiliate, otherwise known together as ARMZ, announced they would buy the remaining 48.6% of Uranium One Inc. (TSX:UUU) which they didn't already own at a premium.

This effectively solidifies them as the world's fourth largest uranium producer, concentrating uranium production even further into Russian hands.

So with the Megatons to Megawatts agreement between Russia and the U.S. about to run its course, Putin may well be placing his chips on what appears to be an increasingly safe bet: higher uranium prices ahead.

Given the growing supply and demand imbalance it looks like that is going to be a pretty safe wager.

From the research that I've done I fully agree with what Peter has written. During my research I've also read an increasing number of articles regarding Thorium and Its use as a replacement to Uranium.

So far though I have been unable to find any two reports that come to the same conclusion ie that thorium is as straight forward a replacement as some make it sound or that it still has a long way to go before research and development can bring it (if at all), into providing the same energy output as uranium.

Another question is that if Thorium is to replace uranium, how long would it take for enough quanty of the material to come into production to supply future needs. My understanding is that India and Australia have large quantities of Thorium but none is mined (other than as a by-product of rare earth mining) in either country.

Peter,
If you feel Uranium has a potential for large gains in the 12-18 months moving forward, what would you recommend to purchase? Are miners a better choice or an etf focused on the metal?

Yes, it’s very much possible as when supply do not meet the demand, prices surely will roar like anything, making it tricky for investors like me to make further planning. Russians should give importance to renew the agreement, so that the possibilities of shortfall of Uranium get met.