What a long, strange trip it has been. Roughly four years after falling to 6,600, the Dow pushed back above 14,000 last week.

Of course, you would think that such a climb would be cause for some euphoria. But reading the mail that comes into Money Morning each day leaves me with another impression entirely.

Judging from the comments, it's clear to me that investors are struggling at the moment with how to make sense of these markets. Worse, an overwhelming majority are now afraid that the rally will leave them behind.

The undercurrent is a familiar friend called fear, and its cousin, confidence. Neither eliminates the need to grow their wealth.

So, what's an individual investor to do? How can you compete in today's brave new financial world?

Point by point, Keith explained how retail investors can safely participate in these markets without losing their shirts.

It's embodied by his "Money Map Method," a proven strategy for building wealth in today's tough markets.

Here's what Keith had to say:

1. Concentrate on what the world needs as opposed to what it wants.

With the markets near all-time highs, many investors think they need to chase performance. So they buy the latest and greatest media darlings. But what they should be doing is concentrating on companies that are boring, predictable and full of cash.

Don't get me wrong. We all want to dive into the deep end in pursuit of profits. The trick is doing so in such a way that you don't suffer the occasional belly flop that comes along when the markets get overheated, like they are now.

Many people hear me say this and think I'm advocating market timing. I'm not. Study after study has shown that market timing is not only an exercise in futility but can leave you significantly poorer for having attempted to do so.

What I am talking about is investing in solid, globally diversified companies with fortress-like balance sheets and high dividends. While I encourage people to do this on the way up, doing so when the markets appear top heavy is really important. The goal is not to sacrifice upside, but rather to build in downside protection. The simplest way to do that is to pick up shares in less volatile companies with product offerings in sectors that are backed by trillions of dollars in spending that is necessary as opposed to expenditures that will be discretionary in the years ahead.

The feeling that the train is leaving the station is one of the worst when it comes to making bad choices. Wall Street knows this and has spent gobs of money figuring out the science of neuro-economics, which is a very fancy way of saying they know exactly what buttons to push to separate you from your money.

Wall Street doesn't do anything halfheartedly -- nor do they expect you to. In fact, they want you to go "all in" every time you invest because doing so helps them make more money.

Trading commissions go up, portfolio management fees go up. Not surprisingly, so does the opportunity to trade directly against you - and, yes, Wall Street still does that on an alarmingly regular basis.

The best defense is to make sure you are never "all in" on anything, and that you have put aside a cash cushion. The last thing you want to do is to have to sell something prematurely if there's a hiccup.

Besides, having cash set aside allows you to buy in on really bad days when companies are put on sale and the upside, ironically, is at its best.

3. Concentrate your assets rather than spreading your money around

Traditional diversification strategies are completely wrong. They are based on the allocation of capital with no regard for risk. As a result, they are frequently and often completely out of line with financial conditions, which can change month by month, or even hour by hour.

Consider a classic 60/40 portfolio of stocks and bonds, for example. For years that was okay because people simply split their capital into chunks between the two asset classes, not realizing that the 60% in stocks translated into 90% of the risk being carried by their equities. 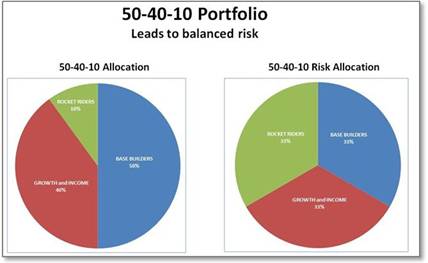 By contrast, The Money Map Method's 50-40-10 portfolio is focused on a group of core economic realities - equities, interest-rate instruments, income production, commodities and systemic credit. This focus makes the overall portfolio less susceptible to economic downturns because the risk is much more evenly distributed.

Further, because The Money Map Method requires that we constantly rebalance our risk, we can easily shift with varying market phases - growth, contraction, inflation and even sentiment-driven events - all without placing significant portions of our capital at risk. 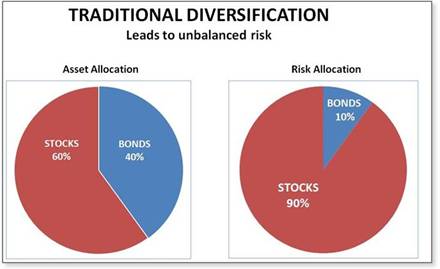 What they're doing is more akin to rearranging the deck chairs on the Titanic. Cases in point: In 2000 and 2008/2009, when the entire world got a big fat margin call and everything went down at once.

I think that's a travesty. I don't believe any investor who properly manages his or her risks has to suffer the ravages of a bear market or take a catastrophic loss. Don't get me wrong, though. Let's be right up front about this - there is no such thing as risk-free investing. Period.

Every investment involves risk - but, and this is my key point, not all risks are worth the investment.

Many investors get very greedy when the markets go on an extended run. Consequently, they often take on fresh risks when the much easier and more profitable path to take may involve simply rebalancing risk among existing investments.

Here's an example that might help. Let's say you're following the 50-40-10 Portfolio I advocate in our sister publication, the Money Map Report. After a major stock run up, the 40% portion may have ballooned to 60%. That means that the recommendations making up the 50% portion would now comprise only 35% of your holdings. In the same way, the 10% may have dropped to only 5%.

Instead of chasing a new stock with a fresh set of unknowns, savvy investors would sell off the "extra" 20% and redistribute it by buying up to reestablish the 50% and the 10%.

Rebalancing works because it helps capture excess growth, forces you to take profits and reinvest in undervalued holdings.

Over time, this helps harvest "excess" volatility and can contribute significantly to a portfolio that grows faster in aggregate than any one of its single components would.

Psychologists and physicians will tell you that the emotional response to watching a stock go up is very similar to what happens in a drug or alcohol addict's mind when they are presented with the next "fix" or "tipple."

And the response to a stock's drop is quite similar to the "down" following the end of the addict's rush. There's a pronounced change in our physiology, thanks to the release of dopamine in our brains.

This interferes with our ability to think logically and can actually prevent investors who don't understand this from making clearly reasoned decisions.

Harvard scientist Jennifer Lerner recently published a study in the November 13 Issue of Psychological Science noting that, "Sadness can make people shortsighted when it comes to financial decisions."

Why am I telling you this?

Because fear and greed - two of the most prevalent emotions right now - produce neuro-economic responses that actually work against you. That's why one of the single most important things investors can do right now is learn to override the emotional inputs Wall Street counts on, tapping into the value of long-term profitability instead of letting decisions be ruled by short-term emotions.

Take the events of March 2009, for example. Fearing the worst, investors sold out $50 billion in equities. The news was full of Armageddon-like stories and end-of-the-world-as-we-know-it hype that created tremendous emotional stress.

Wall Street, which not only thrives on commissions, but also actively trades against its clients, was glad to take the bet.

The big brokerages were able to pick up valuable stocks on the cheap from panicked investors anxious to sell at any price. Commission income and asset-planning-service revenues shot up as brokers actively encouraged their clients to head for the hills, swapping equities for gold and bonds and everything else for cash.

Many now understand, if only begrudgingly, what a mistake they made.

It's always important to look beyond the immediate crisis and seize the opportunity that goes with it.

As we wrapped up our conversation, Keith explained very simply, "If you play by the old rules you'll lose. But if you understand the new rules you can still win."

But here's the thing: You can't win it unless you're willing to come in off the sidelines. The "Money Map Method" makes that quite a bit easier once you understand how it can be used to substantially limit your risk and still produce some very appealing gains, especially now when the markets could roll over...again.

To learn more about the "The Money Map Method" click here.

Hi Steve Ed here I was trying to read the first 50 40 10 portfolio assets allocation risk allocation but it is hard to read anything even with my reading glasses. . could you please tell me what it is written there thank you now the second one is much better I can read that one without my glasses … cheers thanks