A proposed deal taking Dell private shows just how hard it has become for the old guard of PC-based companies to survive in a world dominated by mobile computing.

Today (Tuesday) Dell Inc. (Nasdaq: DELL) announced that it had agreed to be acquired for $24.4 billion, or $13.65 per share, by a group that includes private equity firm Silver Lake Partners. Other investors are company founder and CEO Michael Dell, who is contributing about $3.7 billion, and investment firm MSD Capital.

The deal would be the largest leveraged buyout since the 2008 financial crisis, and one of the ten largest ever.

The news has boosted DELL stock about 24%; it was trading at about $11 a few weeks ago.

In an added twist, Microsoft Corp. (Nasdaq; MSFT) is providing a $2 billion loan to the group that is taking Dell private. As one of the top vendors of Windows-based PCs, Dell is one of Microsoft's biggest customers.

But then, that's exactly why Dell has found itself in such desperate straits.

As the computing world has transitioned away from traditional desktops and laptops toward smartphones and tablets, companies like Dell and Hewlett-Packard (NYSE: HPQ) -- which thrived on the sales of those PCs - have fallen on tough times.

At its height in late 1999, Dell was the world's largest PC maker. The Round Rock, TX-based company had a market cap of $122 billion and the stock traded at $50 a share.

But as PC sales have fallen in the wake of Apple Inc.'s (Nasdaq: AAPL) iPhone in 2007 and iPad in 2010, Dell has suffered. By last November, DELL was trading in the $9 range and its market cap was about $17 billion.

Perhaps the biggest blow to the traditional PC makers like Dell was the dramatic rise of the tablet.

In the fourth quarter of 2012, tablets sales reached 52.5 million units, double the number from the same period a year earlier. Meanwhile, PC sales fell 6.4% year over year to 89.8 million units.

According to research form NPD, more than 240 million tablets will be shipped worldwide in 2013, surpassing PC notebook sales, projected at 204 million, for the first time. 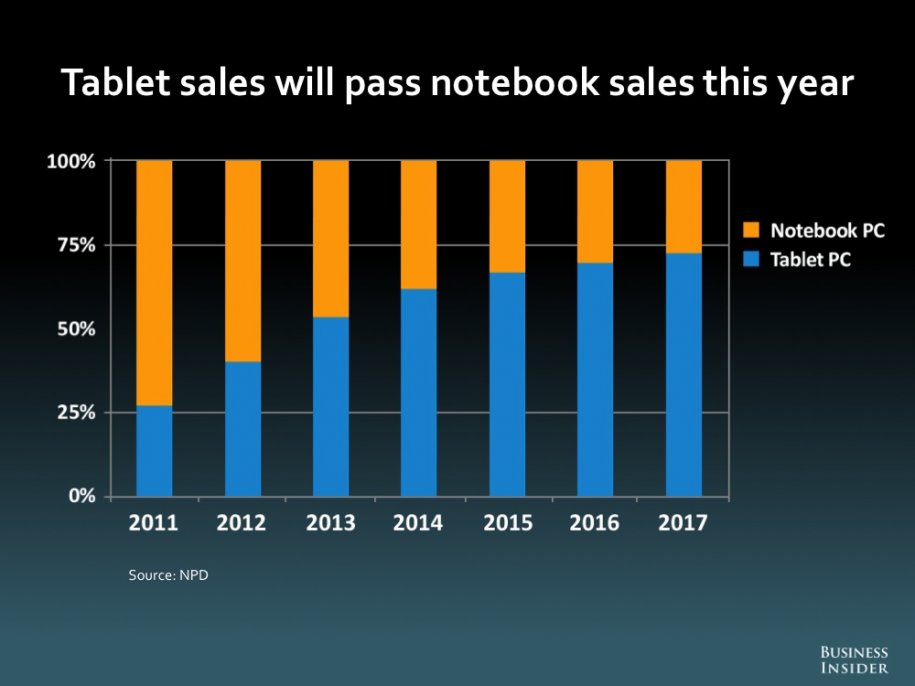 Dell wasn't ready for the post-PC era, or the speed at which it arrived.

When The Wall Street Journal asked Michael Dell in 2011 "what surprised him the most" since he resumed his role as CEO in 2007 (he had left the post in 2004), the sudden popularity of tablets immediately came to mind.

Still, the company tried to become more relevant to consumers with ventures into music players, smartphones, and high-end laptops.

But the efforts failed to impress consumers, who, after years of watching the company lead the PC price wars, had grown accustomed to thinking of Dell as a low-cost brand.

With no fruit from their consumer strategy, Dell decided to angle for business customers by offering complete solutions that included not just computers but security software, networking, and data storage systems.

While the business efforts have fared slightly better, it hasn't been enough to offset Dell's plunging PC sales, which fell almost 21% in the December quarter year over year.

As the trend toward mobile computing has accelerated, Michael Dell realized that only drastic action would save the company.

After the announcement today company officials said that taking Dell private will make it easier for the company to focus on the most successful part of its business, the strategy of becoming a one-stop-shop for enterprise customers.

"Under a new private company structure, we will have time and flexibility to really pursue and realize the end-to-end solutions strategy," Chief Financial Officer Brian Gladden told Reuters, who added that going private will remove "the scrutiny and limitations associated with operating as a public company."

But even taking Dell private can't cure all that ails the company.

"This is an opportunity for Michael Dell to be a little more flexible managing the company," FBN Securities analyst Shebly Seyrafi told Reuters. "That doesn't take away from the fact they will have challenges in the PC market like they did before."

Unless Dell has some new marketing and or product coming online right away, I cannot imagine why anyone would go all-in by taking this company private. Either Dell and Microsoft are living a past dream or they have something new and innovative. For their sakes, I hope it is the latter.