If you've been a hibernating bear lately, you've missed a ton of positive news.

In addition, the JP Morgan Global Purchasing Managers' Index rose to 51.5, staying above the expansion level for a second month in a row. The strengthening data, as well as improving investor sentiment, helped the Dow hit 14,000 for the first time since 2007.

For the month of January, U.S. stocks experienced the best month in two decades.

Per the Stock Traders' Almanac market indicator, the "January Barometer," the performance of the S&P 500 Index in the first month of the year dictates where stock prices will head for the year. Let's hope so.

As Adam Shell from USA Today writes, "While there's no guarantee that what happens in the first month of a new year will continue for the remaining 11 months, history is on the side of investors."

Shell asked for my thoughts on this trend and I told him that sentiment has improved in part because several uncertainties have been removed from the market. Read the rest of the story here.

Its latest Bloomberg numbers show that 53 percent of those surveyed expect equities to be the best-performing asset class over the next year. This represents a "17-point jump over the previous poll in November, and the highest reading in the four-year history of the survey," says BCA.

My anecdotal experience this week at the World Money Show in Orlando, Florida supports the view that investors are going "all-in" for equities, as the exhibit hall and conference rooms were packed with thousands of enthusiastic investors looking to gain insights.

As a result of the sentiment that rose faster than the summer heat in the Sunshine State, it's common to question if the market has climbed so high that it might correct and revert to a long-term mean.

Take a look at the oscillator to see today's incredible shift in context with its historical moves. 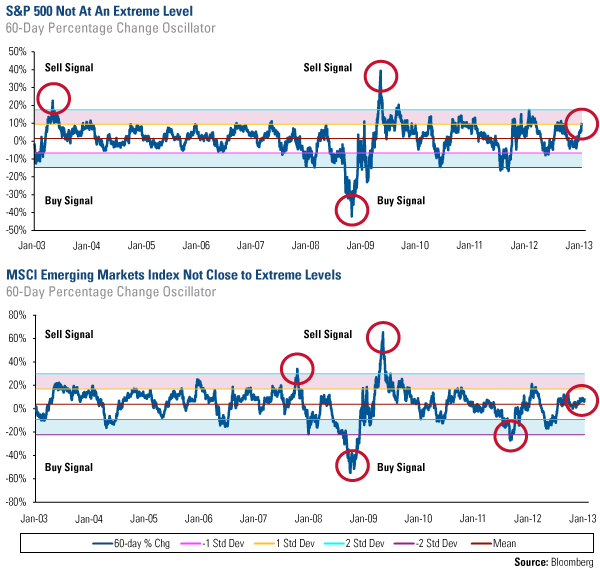 These charts indicate that the indices are not at extreme levels, like the low we experienced in 2009 or the high a few months later. Rather, the stocks are moving within their normal band of volatility.

This gauge has been a reliable indicator for our investment team, as markets that enter the extreme territory have historically reverted back to their mean. However, don't panic if a correction should occur, as it would be healthy and reflective of the normal volatility inherent in both U.S. and emerging markets.

BCA believes, "equities should outperform Treasurys over a cyclical horizon of two-to-three years." The research firm points to the relatively strong earnings season in the U.S. and the Federal Reserve's ongoing monetary stimulus, "which should provide a tailwind for stocks." Here are three more reasons to be positive on equities:

1. U.S. businesses and households are deleveraging

After hitting a peak, you can see in each of the charts below that there has been progress in bringing down the levels of debt across businesses as well as individual households. Less debt gives consumers and companies more confidence to invest, spend and hire. 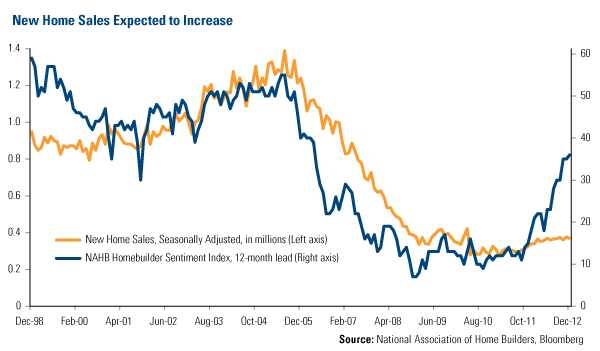 As you can see in the chart, inflation remains low in Japan, Europe, the U.S. and the U.K., with core consumer price inflation falling below 1.5 percent, according to BCA Research. Even though many developed nations are printing money and are experiencing the "most extreme monetary stimulus in modern times," inflation is stable. 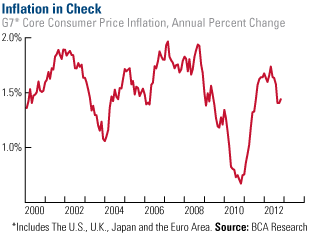 So will the Dow go beyond 14,000? Although you can't predict how hot the weather will be this summer, the clouds appear to be parting to reveal the sun today. Make sure your asset allocation positions your portfolio to shine.

The deleveraging of businesses and households is the only REAL positive information here. To say that new home sales "SHOULD" increase is pure speculation. Much of the new home consruction over the last couple of years was for replacement of homes that were destroyed in tornados and a hurricane. That is money that is coming, mostly, from insurance and not from people investing in the economy. As for low inflation, what planet are you living on? The numbers are so skewed that there is no resemblance to the real inflation rate, which is more likely around 8% or 9%. The banks realize that the real inflation rate is higher than the "official" inflation rate, and so therefore it is inevitable that the interest rates will rise dramatically when they start to move up. The banks do not want to lend money out at a low rate right now because if they lock themselves into loans at low rates while paying out low rates to depositors, and then the interest rates go up, the depositors will insist on higher returns and the banks will end up either losing their depositors to higher yielding investments or the banks will have to pay out a higher interest rate to depositors. That is hard for them to do if they have loaned out that money at super low rates. So the banks do not want to get caught in the interest rate squeeze when it comes. That is why banks are not lending money until the interest rates start to approach the REAL inflation rate. And that is why the housing market and overall economy will not improve until interest rates approach the real rate of inflation.

….what Jeff said. Banksters are scum but they are not usually stupid.