Whenever the markets begin to look toppy like they do now, I turn to short-term indicators to help me figure out "what's next" for the markets. It complements the fundamental analysis I rely on for the big picture.

Some people – lots of people, in fact – will tell you that this is a wasted exercise. Predicting the markets, they say, can't be done. I disagree if for no other reason that if that were true, guys like Jim Rogers, Warren Buffett, Steve Jobs, Richard Branson and Carlos Slim wouldn't be the legends they are today.

As I see it, learning to "read" the markets and anticipate its twists and turns is absolutely possible.

But let me qualify my statement. My goal is not necessarily to be "right."

Any savvy trader will tell you the objective is to get enough of a read – right or wrong -so that you can use the appropriate tactics needed to be profitable.

For example, the markets have one heckuva run and flirted with new highs in recent trading. To the casual investor, it appears that things are good because the economy is gradually recovering.

Yet, there have been nine insider sales for every single buyer among NYSE stocks in the past week, according to the Vickers Weekly Insider Report as reported by CNBC.

Clearly something doesn't match up, especially when you consider that the last time insiders sold this aggressively was in early 2012, right before the S&P 500 took a 10% header.

As my colleague, Bill Patalon, noted recently in his Private Briefing column, there are all kinds of legitimate reasons insiders sell their shares. They range from simply taking profits to portfolio reallocations, estate planning, raising cash to pay the ginormous taxes that come with success, even financing dream homes. So there could be something else at work here. But I don't think so.

What concerns me is that insiders, particularly when you're talking about senior management types, typically know a lot more than the average investor. Further, they tend to have a consistent view of very specific longer term market conditions and, more importantly, its earnings potential.

They are, as Enis Taner of RiskReversal.com noted to CNBC, "usually right over a long period of time."

What Insiders Sales Say About the Market

My take is that the insiders are spot on. I also believe that the fact that they've chosen to sell aggressively right now suggests a looming correction is in the works. Here's why: 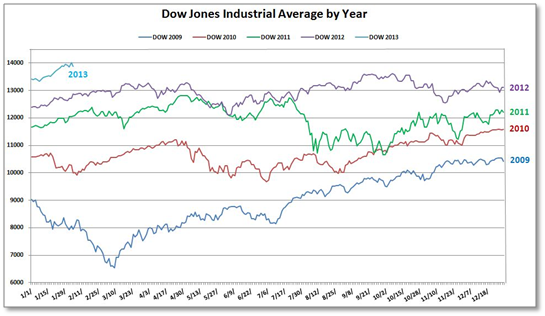 With that in mind, here are my key takeaways:

My fear is that we've already reached the point where there is so much money sloshing around that the next "big thing" from Team Fed may actually be the straw that breaks the camel's back. But that's another story for another time.

Thank goodness protection is cheap at the moment. Assuming, of course, insiders know something "we" don't.

>>For more wisdom from Keith, check out How to Invest in 2013 Without Losing Your Shirt.

Mr. Fitz-Gerald, You make complete sense, but this is an irrational market pumped by the Joker. It seems that it has to correct soon, but when and how far? I'm waiting for Dow to fall to 10600. Then there are those who say that a good January means the market will finish up for the year. January was up 6%. So, a 20% correction happens around April-June followed by a 20% rebound, leaving the market up 3 or 4% for the year. The next issue is the shape and rate of the rebound. The V kind are the killers. No… Read more »

"My goal is not necessarily to be 'right.'

Any savvy trader will tell you the objective is to get enough of a read – right or wrong -so that you can use the appropriate tactics needed to be profitable."

YES! Or said another way…so you can protect your backside, because you're likely to be wrong about as often as you're right when making straight directional bets.

Keith,
Your report only focuses on one week. That data can be an aberration. What is the trend?

I can understand insiders selling in November/December because of the increases tax burden on trades, which would effect data, but look at what has been happening since Jan. 1 and share that data with us.

Though the market has had a huge run up over the last two months and may need some cooling, the data from Vickers was shared via CNBC. It might be good to be a contrarian.

You didn't mention it, but your chart counts pretty nicely in Elliot Waves–putting us at or near the end of an impulse wave of count 5, meaning that the next wave is likely to be a downward (correction) wave 1 of 3. Looks to me like a good time to take profits…

2/8/13 8:45am Pac time. Keith, if you haven't happened to note this, the Dow topped back in October, 2007, and here we are, 5 years later at a DOUBLE TOP! A monthly double top/bottom can mean something but a 5 year double top here has a lot of smart traders being aware of that (just as the average guy or gal out here does not chart or look at a Big Picture ahead of smaller, inside picture, SO, at least be aware here –if we break UP, we have another leg higher, if we break down, that surely tells us… Read more »

The one thing our Foujnding Fathers missed (in correctly making us a Republic, not a democracy) was to project the percentage of working Americans who would gradually move from being enrepreneurs to wanting someone else to do his or her or it's (companies) work for him or her or it! For example, if you have an 8 man rowing crew and you are at the Starting Line with 7 other crews, if, as the race gets under way, boat #7 has alll 8 guys rowing hard, but boat #3 has 3 of it's rowers decide to watch the race and… Read more »

I love the rowing metaphor.

GOOD OLD INVESTOR "COMMON SENSE" Sure, its merely "common sense" that the owner or manager of a company knows more about his business than you (public) probably do. Its just not everyone focuses on this fact at times. Its one piece of information which alone does nobody much good, if you are inclined to attempt to time the market on it. I learned a long time ago that is foolish and besides, as you have already said Keith, "85% of investors can not successfully time markets". I agree, when the market currently appears "overbought" then you might hold-off buying additional… Read more »

Actually, Warren Buffett is famous for saying that he cannot predict the market and doesn't believe that anyone else can either. His approach is to buy into undervalued situations and wait, as I understand it.

If insiders are selling,I am too.

Excellent article, Keith! Your chart on the Dow Jones Industrial Average by year for the last four years (2009 to 2012) gives us a good working guide as to how the stock market is going to behave in 2013. I am going to keep this chart as reference and compare the 2013 DJI behavior to whatever year is applicable for the rest of this year. This chart is a working tool for investors. We can make more intelligent decisions based on past DJI behavior. History tends to repeat itself. This one chart makes it worth the annual subscription to Money… Read more »

My feeling is that anyone selling in the last five years has missed out on the next wave up. Remember, don't fight the fed! When the fed is injecting 85 billion a month into the banks and they turn around and buy stocks with it rather than loan it out, I want to be on the long side of that move. Also, we're seeing money finally coming out of bonds and moving into stocks. Once again I don't want to be opposing that wave either. When watching insider trading you have to realize that those folks get a year-end bonus… Read more »

You guys all raise some very interesting and valid points – and I love that. Thank you for taking the time and the mental bandwidth to respond! Insider selling is always a loaded term. People hear it and immediately think in all or nothing terms when, in fact, the markets are far more subtle. I've never, for example, seen an insider sell everything all at once. On the other hand, I have seen plenty of individual investors do just that and most of the time with disastrous results. I'll be watching the insider ratio carefully over the next few weeks… Read more »

"As for leveraged and inverse ETFs, Vanguard founder John Bogle says this is where the "fruitcakes, nut cases and lunatic fringe" can be found. "There's just no possibility or any realistic way that you're going to win that bet," he says about leveraged ETFs."