Chances are you've heard about the so-called "race to the bottom" in which various industrialized nations are gradually allowing their currencies to depreciate in an attempt to maintain competitive parity.

Forget about it...the real risk right now is an all-out 1930s-style currency war. I know it's not front-page news yet, but I have a sneaking suspicion it will be shortly.

It's going to blindside Washington and most of Europe, where central bankers, politicians, and more than a few economists fail to recognize that events from nearly 100 years ago are now primed to repeat themselves.

Worse, it will devastate an entire class of investors who have put their faith in the current economic dogma of endless bailouts and money printing.

Ironically, this currency war won't start because of international problems. Instead, it will be touched off in earnest because of domestic concerns-- only they aren't ours. My guess is Japan fires the first shots.

This is very similar to the situation in 1931 when the United Kingdom removed itself from the gold standard on September 19th of that year.

Not surprisingly, by December the pound sterling took a 30% nose dive against the U.S. dollar. It also set off a chain of "me-too" actions and reactions from the United States, France, Germany, Sweden, and Norway, among others.

Notes Roderick Floud in his book, The Economic History of Britain Since 1700: Volume 2: 1860-1939, there were "some 25 countries with close economic or imperial links to Britain" that had tied their currencies to the sterling.

If you remember your history, the lessons here are pretty clear: The nations that abandoned the then-prevailing international currency trading standard first benefited the most.

Conversely, those that hung on got slammed because their money suddenly commanded a premium versus the newly "inexpensive" sterling, U.S. dollar, French franc and German mark, which were the powerhouses of the day. By 1932, the sterling's depreciation had created a "rapid and forceful cyclical upswing" notes Floud, because the cheap money that stimulated investment following the UK's exit from the gold standard really was not so much a result of policy as a it was the by-product of "depressed world financial markets."

I agree. Right now, in a replay of events from that era, a stronger yen has crippled Japan's recovery by limiting its ability to engineer a brighter future by making its goods prohibitively expensive in global markets at a time when world markets are sluggish themselves.

Compounding the problem is the fact that Japan's overall market share of world export markets has declined much the way England's had.

There's obviously no gold standard to come off of at the moment, which is why the "things will be different this time crowd" can't wrap their heads around the concept of a full-blown 1930s-style currency war.

Goosing the printing presses and moving aggressively to weaken the yen before other nations weaken their currencies further would allow Japan to capture additional market share from other exporters before they have a chance to react.

Obviously, such actions would not sit well with major regional trading partners, most notably South Korea and Taiwan. Nor would it be particularly well received in South America, where emerging markets are tied to a blend of U.S. dollars and, increasingly, the Chinese yuan.

So retaliation would likely be swift and significant in the form of capital controls and transaction-specific taxes, both of which are blunt force instruments capable of doing a lot of damage. That's another lesson from the 1930s that seems to go unheeded by today's leaders.

To some degree, a currency "skirmish of sorts" is already underway in that there's already been a lot of verbal intervention by various nations. However, I look at this as a largely wasted exercise by self-interested politicians and central bankers. They're all staring at each other across a sea of political niceties while all the while hoping nobody will be the first to blink.

Eventually, somebody will decide to do just that; it all depends on who has the right incentives and how much they have to lose.

That's significant because the psychology of our leaders has changed since this crisis began much the way it changed in the 1920s leading up the United Kingdom's departure from the gold standard in the 1930s. Specifically, when this crisis began, world leaders quickly realized that they had to work together in some capacity, so they gathered the G20 for discussion as opposed to the much smaller - some would say elite - G5.

Today, though, as conditions continue to deteriorate and each new round of fresh stimulative action brings less in the way of results, the attitude is becoming "every man for himself." Naturally, the breakdown in cooperation heightens the severity of any potential disruption or departure because the benefits of going it alone begin to be worth more than continued participation in the group.

It's no wonder that nations like Sweden, Hungary, and Germany are agitating for lower rates under the circumstances. Others are sure to follow.

As of February 5th, the euro was up 11% against the yen already this year, which greatly complicates the EU situation against a backdrop of 0.8% growth projections in 2013. A weaker euro currency would help them regain economic prowess...but only if the yen held still.

Who will be the winners?

That's an entirely different question. I think the winners will change as the battle progresses. Using the 1930s as an example, it's clear that the country that moves first gains the most, so that constitutes winning at least early on in the battle. That's probably Japan.

However, once a good old-fashioned currency war gets underway in earnest, I think the winners-- if you can call them that-- are those who have the wherewithal to withstand the deepest drop. In a world of interlocked finance and an estimated $1.5 quadrillion worth of unregulated derivatives tied to numerous asset classes including sovereign debt, that's not a pleasant thought, because some nations have a lot farther to "fall" than others.

I believe the U.S. will be the victor in the medium-term. While this country no longer has the deep manufacturing base it once did, the majority of commodities are still traded in dollars, which builds in a de facto advantage. The looming downgrade everybody fears will actually strengthen things as long as Team Bernanke maintains an "accommodative" stance - boy, have I come to loathe that word.

Longer term, however, it's a very different story.

China, with its 1.3 billion consumers and growing global influence, will be the clear winner. Right now the yuan is a partially blocked currency, but that's changing very rapidly as the economic balance of power shifts east. And it will continue to shift for at least the next decade. 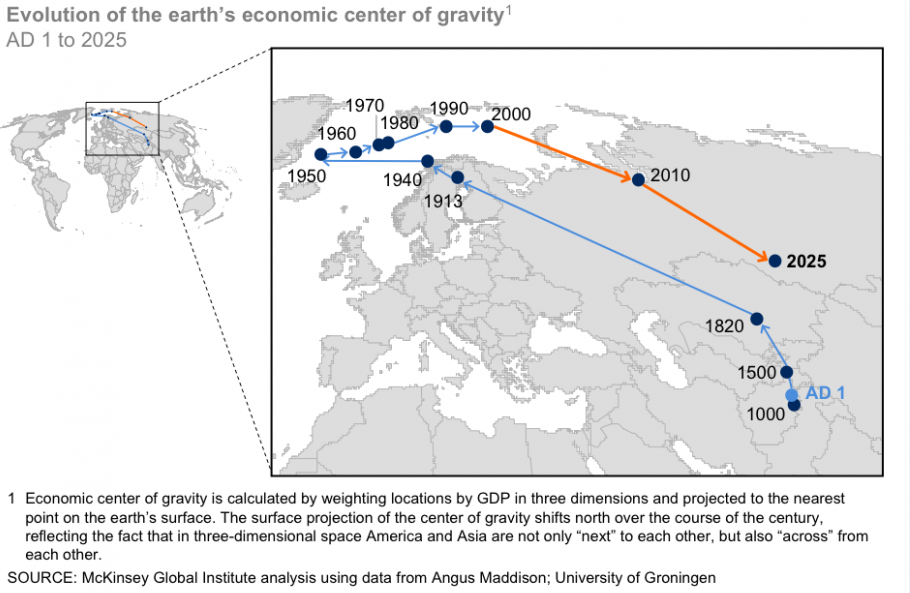 As I have noted repeatedly, China's acutely aware of the yuan's potential, which is why that nation has very carefully and methodically engineered its emergence into global markets over the past decade.

Beginning with partial trading ranges, proceeding through bilateral yuan-based swaps that bypass traditional global currency trading pairs and the development of its own futures markets, China is taking action to ensure the yuan has the foundation it needs.

Because China wants to ensure that the yuan has stable, long-term value in global markets when it becomes fully convertible in 2015 and begins trading freely from an offshore hub in London.

My, how the world turns.

>>Now check out Godzilla Will Come Out of Tokyo Bay Before Japan Rebounds.

>>Or for more on Japan's currency, go to Yen Carry Trade Is Back (But with a Difference).

>>Just published: How to Profit as Global Currency Wars Begin.

Following the train of thought in this article I would suggest that the UK may be the next country after Japan to trash its currency in the hope of economic growth. Some commentators here in the UK have speculated that the recent surprise appointment of Canadian, Mark Carney, as Bank of England governor was made because he is perceived by politicians as being more likely than his predecessor to do what he is told by his political "masters". With an election starting to loom on the horizon for the UK, he is likely to be told to get the economy going whatever the cost to sterling so, as in the 1930s, perhaps the UK may also be to be an "early mover" in the currency depreciation battle.

You don't mention Canada. Surely its economy will suffer if it remains a "strong" currency? Or is its economy so small it doesn't matter?

Excellent article. The USA ensured that the European banks would continue to use the USD for inter-bank transactions when they bailed them out a couple of years ago with a bunch of freshly printed USDs, making the banks promise to use USDs in the future.
Do you know if any similar agreement was made with any other economic areas? This simple bail out, attached to the promise of continued use of the USD was a stroke of genius in delaying the replacement of the USD as the defacto international currency. If enough of the world promises to use the USD for their inter-bank exchanges then that would most certainly thwart the yuan from becoming the defacto international currency.

"Don't worry about the Chinese. Russia will not go down without a terrible fight, and China is so decadent and over populated that ONE mistake and she is finished."

Woa!!!!! Are you serious?
Here is a country which is "rich" in Gold. They are gradually alliowing their currency to stabalise, they are also millenium in experience against our puny 250 odd years old.
We are still trying to come to terms with acupuncture………….
Not so long ago, Forbes quoted a list of the most corrupt nations on earth.Guess who came top?……….The good old USA.

Sir:I agree a 100% with you.But all over,I will love to see your prediction become true!!!.

Do you think the fallout from this new World "currency" War will increase the call for a new "sovereign" international currency? Could the US end up on the low end of a restructuring of the world financial order? Ive heard a lot about SDR's and their use in implamenting a new global currency. It's called the bancor i believe. What do you guys think?

If there is to be a discussion on currency wars then which nations are choosing sides; e.g., as both usa + japan = print$*¥^[9999]…then how will that china "is letting it float" thing work out? Might china seek out korea as a currency war ally? Look for china to cut a deal with korea to muzzle (at least) kim jung un to sweeten the deal.