In a message delivered to several news outlets, Belski argued that U.S. companies will soon start using their increasing cash piles to invest in their own businesses. He sees it as the next logical progression for companies with strong balance sheets.

Of the four ways a company can spend cash, he said, three have already been widely employed.

Capex is the fourth way, and Belski not only thinks it's inevitable, he says the corporate growth that will result will power a stock market rally that will last "at least three to five years" and could well be the beginning of a "super bull market" that could go on for as long as 15 to 18 years.

"We think this train has a very long tail," Belski told Breakout.

How Capex Can Drive a Stock Market Rally

Many companies have been reluctant to invest in their businesses since the 2008 financial crisis, fearing weak demand, Belski said. That's also a big reason U.S. companies have accumulated so much cash.

"They've been cutting costs and rebuilding their balance sheets for 15 years," Belski said. "That puts them in exquisite position now to bring in more capital."

It's clear the companies have the money, but the key question is: What will jolt CEOs out of their defensive mindset and shift their focus away from capital preservation and toward growth and expansion?

"We think it's actually going to be forced upon them," Belski said.

He sees more global investment returning to the United States over the next several years.

"We've seen fundamental instability and volatility around the world - and look at what we're seeing in Europe," Belski said. "Companies are not going to want to do business as much with companies in Europe and emerging markets because of the stability that U.S. companies can provide them."

At that point, he said, the "lean and mean" U.S. companies will have no choice but to expand their businesses in order to meet demand.

"As business volumes and sales growth comes back, you can't get blood out of a turnip because capacity has been cut so much .... They have to start building property plant equipment again," Belski said.

Belski: Capex Already on the Rise

"Guidance for capex this year is going up for the first year in a while," Belski said.

Several sectors are expecting higher capex spending in 2013. For instance, GlobalData, which analyzes the oil and gas industry, released a report at the end of January projecting 2013 capex in that sector to rise to $1.2 trillion, a 15.9% increase over 2012. 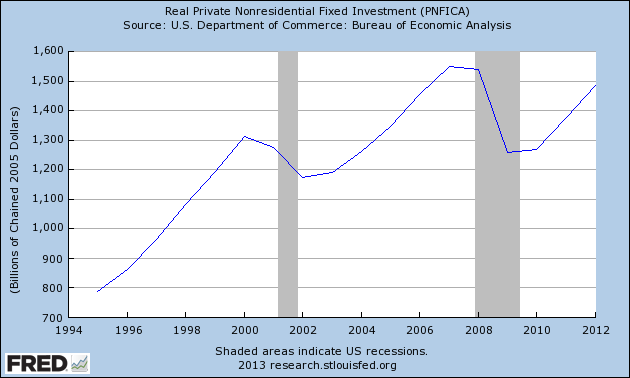 Such data has Belski optimistic that the U.S. stock market rally that carried us through 2012 is far from over.

"We think that the second half of the year will be led by a U.S. domestic recovery," Belski said.

And while he sees a broad-based stock market rally, Belski has pinpointed three sectors - industrials, energy and technology - that he believes will benefit the most from the capex spending trend.

"Stock prices have gone up the past couple of years," Belski said. "We believe the cycle is already in place."

These indicators are impressive, even as impressive as the markets indicated in 2007 just
before the collapse! And what was the state of the economy then in relation to its present
state? I think we should keep a cautious eye on these market indicators presented so glibly
by Mr. Belski. Euphoria has preceded every single market collapse since 1720. Projecting
coming market moves from present trends could be fatally misleading. But of course only
time will tell if this four year rally is truly bull or nothing more than a Fed Reserve created
steroid cycle near its end.

This Rally Is in Its Infancy
http://nexvucapital.wordpress.com/2013/02/20/this-rally-is-in-its-infancy/

Yeah but when INTC announced Capex look what happened to the stock.