With domestic demand in most home countries anemic to moderate, the universal objective is growth by exports.

Unfortunately, countries doing battle in the growth-by-exports wars end up skirmishing in the foreign exchange markets. That's because every country that wants to export its goods and services wants them to be relatively cheap compared to its global competitors.

Driving down your home currency relative to the currencies of the buyers of your products is a way of implementing a "cover all bases" export growth strategy.

Of course, as countries trade blows in this "beggar thy neighbor" strategy, besides the danger of a debilitating currency war breaking out, rough and tumble currency manipulation leads to disruptive volatility in stocks, commodities, and bonds.

But while you personally can't do anything about currency battles or a full-blown currency war, it doesn't mean you can't profit from all the volatility.

Here are some simple ways to hedge your portfolio and have fun trading the markets to profit from bickering neighbors throwing currency Molotov cocktails at each other.

In a Currency War, All Is Not What It Seems

First, you've got to take a hard look at the stocks you own. If you have big U.S. multinationals that garner a lot of revenues from overseas, watch out.

Companies like McDonalds (NYSE: MCD) or IBM (NYSE: IBM) that generate a lot of their earnings from overseas operations and sales are paid in local currencies wherever they do business. When it comes time to translate their overseas earnings into U.S. dollars, because that's the language we speak here in America, companies have two options.

In this case, you'd better know which option they use.

They can translate foreign earnings on a "constant" basis, which means they take a long-period view of the exchange rate between the dollar and the country's currency they are translating into dollars. They might pick last year and say that, based on the average exchange rate over the last year, which they will use for several quarters, we earned so much in dollars.

Or, they can be more transparent and at the end of each quarter they report earnings based on the current exchange rate -- we earned "this much" (in dollars) from our foreign operations.

When a foreign country's currency is higher and rising versus the dollar, it buys more dollars. That means you can have a situation where a company's sales overseas are flat or negative (which would be a warning sign) but because the money was earned overseas and then translated (for accounting and reporting purposes) into dollars, it looks like their earnings were higher.

But be careful; you'd have been fooled.

The earnings were higher because the currency translation was a positive for the company. Would you want to own that stock if its sales were falling dramatically in the hot markets you thought were their best growth prospects?

What if your big multinational stocks end up with foreign revenues from countries (Japan?) where they are devaluing their currency? Those currencies will buy fewer dollars and earnings. On a translated basis those companies will suffer.

To understand whether your stocks might go up or down, you need to understand how companies translate foreign earnings into dollars and look through earnings to see if sales are good or bad.

How to Trade These Wars for Fun and Profit

If you want to have some fun and make some money on currency moves, there are a few ways to play this situation directly.

Right now the U.S. dollar is the "cleanest dirty shirt in the laundry," so I'd buy it.

As other countries work to knock down their currencies, it's important to point out the U.S. has already done that. Uncle Sam was the first to engage in that policy, but on a very hush, hush "we're not doing that" basis. But QE and keeping interest rates low here is how that's been accomplished, and our exports have been robust as a result.

But now other countries are fighting back and the U.S. is going to the sidelines, on a relative basis.

One way to play a rising U.S. Dollar is with the PowerShares DB US Dollar Index Bullish (NYSE: UUP) It goes up as the dollar gets stronger. I expect the greenback will continue to be relatively strong, so I would buy UUP.

If you think I'm wrong, you would buy UDN, PowerShares DB US Dollar Index Bearish (NYSE: UDN). It goes up when the dollar goes down.

Either way, the trick is to use technical analysis to trade these currency ETFs. 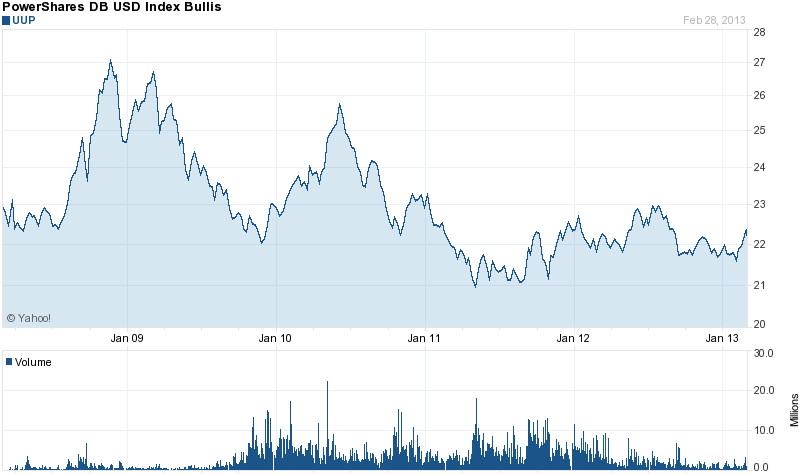 But to me that's a good, simple way to play what I believe is the tendency for the dollar to be the cleanest dirty shirt in the global currency hamper.

On the other hand, there's the CurencyShares Japanese Yen Trust ETF (NYSE: FXY). The yen has gone down a lot lately because the Japanese government has been pushing it down, and I see it may be bottoming out here.

Another currency ETF trade that makes sense is buying the ProShares UltraShort Euro (NYSE: EUO). It's a leveraged ETF that rises twice as fast as the euro falls in value relative to the U.S. dollar.

The euro, which has been rising steadily on the heels of the euro-currency-zone seemingly firming-up  on account of Greece not being kicked out or willingly leaving, and the  massive ECB backing of government bond markets, once again looks vulnerable as the entire Eurozone slips back into recession.

Fiscal austerity, part of the hope that Europe can get its debt-ridden governments to reduce deficits is now under direct attack with the stalemate drawn recently in Italian elections.

If any of the positives that have supported the euro over the past few quarters falter, and there's evidence that's happening already, buying EUO near these levels around $19.50 makes sense. So does adding to a EUO position at lower levels, down to $17.

Buying gold is another way to play the prospect of currency skirmishes turning into a full-fledged war. Gold is considered an alternative currency, one that holds its value as a result of its precious-metal history. As currencies sink on a global basis, gold will the "last man standing."

An easy way to own gold is by buying another popular ETF, the SPDR Gold Shares, (NYSE: GLD). Buying GLD here in the $152 range and buying it down to $135, where it has strong support makes a lot of sense.

I recently recommended both GLD and EUO on a guest appearance on Fox's Varney & Company show.

There will be plenty of other currency battle and currency war trades to make in the months ahead. In fact, I believe the hottest trading ahead of us will be currency related trades, and trades based on all the deal-making that's about to explode in the U.S. and across the globe.

That's what I do. I look for smart risk-reward trades to make myself money -- you should try it, too.

Robert in Canada
Reply to  frank

Frank, you need to calm down and take a deep breath. Maybe you better stop drinking black coffee too.