In 2012, Turkey was the best performer among the emerging markets we track on our Periodic Table showing a decade of returns. All developing countries rose last year, but stocks in Turkey climbed an astounding 56 percent. 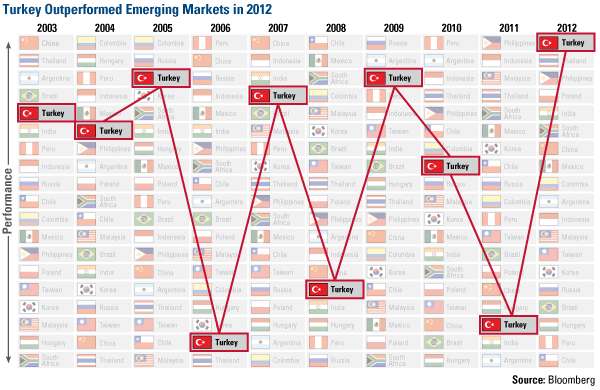 While visiting the country last week, I was happy to see my explicit knowledge of Turkey's growth was supported by my tacit knowledge.

Istanbul has been in the midst of a fantastic transformation from an impoverished population to one of affluence. Popping up among the beautiful Ottoman mosques, Byzantine churches, palaces and bazaars are ultra-contemporary art sculptures, shopping malls and lush landscaping.

This blend of ancient with modern fits well with the young, vibrant and culturally diverse crowd that hangs out in the local cafes, shops and galleries.

Investment managers like me aren't the only ones showing increased interest in Turkey's new-found prosperity. Secretary of State John Kerry visited Turkey during his first overseas trip as America's top diplomat.

The topic of their discussion is not new, but suggests a "new chapter" for Turkey. These leaders are picking up the conversation started years ago regarding Turkey entering the European Union (EU).

Tim Steinle, portfolio manager of the Eastern European Fund (EUROX), says that unlike Greece, which fudged its numbers to join the EU, Turkey was held to a higher standard. But it doggedly pursued its aspiration, and in the process of implementing the EU accession chapters, such as the Right of Establishment & Freedom to Provide Services, Company Law, Financial Services, Information Society & Media, Statistics, Financial Control, and Science & Research, had modernized its economy, making it competitive with those of Western Europe. In addition, open trade with the EU allowed it to build a diversified export economy.

Turkey's admittance to the EU had stalled over Cyprus, but more recently, France and Germany seem to be warming to the idea. Under newly elected President Francois Hollande, France is opening another chapter to the accession, and Angela Merkel's visit to Turkey is signaling a shift in Berlin's position on Turkey's membership.

This wasn't the only time Turkey reformed its policies. In 2001, the country experienced its own devastating financial crisis, and as a result of that experience (with which the rest of the world can now sympathize), the government adopted tough, but important financial and fiscal reforms. These reforms helped the country rebound, and its strong banking regulations kept banks well capitalized compared to the U.S. and Europe.

In the charts below, you can see the result of the government's determination. From 2010 through 2012, Turkey's GDP exceeded that of Europe, the Middle East and Africa (EMEA), as well as the rest of the world. Through 2015, GDP is also expected to be greater than EMEA's GDP as well as overall world GDP. Simply stated, Turkey "remains superior in the region," says Wood & Co.

Turkey's manufacturing sector, in areas such as the automotive industry, white goods that include refrigerators and washing machines, and glass makers, has also been growing in strength.

For nearly two years, Turkey's purchasing managers' index (PMI) has been significantly stronger than Europe's and "outstrips global averages," says Wood & Co. Although the PMIs around the world fell rapidly in mid-2011, Turkey's manufacturing hasn't fallen below the expansion number of 50 as often, and as significantly, as Europe. According to Wood, Turkey's PMI also recovered, "signaling growth ahead." 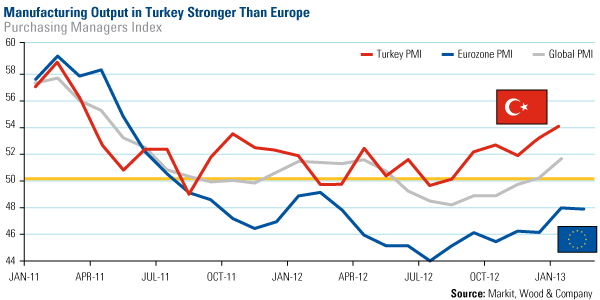 Turkey's latest manufacturing PMI number of 53.5 in February was slightly lower than its January figure of 54.0, but manufacturing remains solid and in expansion territory. Businesses are reporting an increase in new orders, new products and new clients and "new business from abroad increased at the fastest pace since January 2012," says HSBC.

With the country exhibiting positive demographics, strong consumer demand and an open, competitive economy, Turkey is at a figurative, as well as literal, crossroad between Europe and Asia. The European Energy commissioner Günther Oettinger annoyed Germany when he suggested that the EU needed Turkey more than Turkey needed the EU: "I would like to bet that one day in the next decade a German chancellor and his or her counterpart in Paris will have to crawl to Ankara on their knees to beg the Turks, "Friends, come to us.'"

However, Spiegel Online reports Erdogan hinted that the emerging economy may consider joining the Shanghai Cooperation Organization, which includes countries such as China and Russia, instead. "The economic powers of the world are shifting from west to east, and Turkey is one of these growth economies," remarked the prime minister.

My visit to Istanbul was thrilling, and I'm equally excited about the continued investment prospects for Turkey as it gains in economic strength.