The San Francisco Bay Bridge has become the shining symbol of why the future is so bright for LED lighting investors.

The span connecting the East Bay to San Francisco is now adorned with more than 25,000 bright LEDs strung on some 300 vertical wires along 1.8 miles of the bridge's western span. 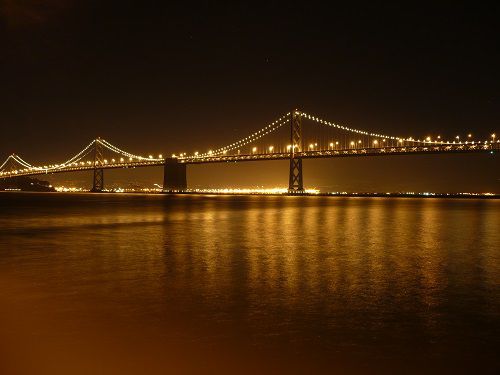 Called The Bay Lights, the LED necklaces are part of a two-year project by artist Leo Villareal designed to dazzle the millions who see the landmark bridge at night.

My wife and I recently had dinner at a restaurant that looks right at the bridge, and both of us were just dazzled by the quality of the exhibit, funded largely by wealthy donors and local businesses.

But there's more to this display than public art and tourist appeal...

Cree (Nasdaq: CREE) Is On a Tear

The project also underscores the huge gains being made by the domestic LED lighting industry. From flashlights to autos to billboards to retail stores, LED lights are now turning up everywhere.

This helps explain why shares of Cree, Inc. (NasdaqGS: CREE) have gone on a tear of late. Since the stock began its big rally in late July 2012, Cree shares are up more than 131%. This week alone the stock is up 18%. 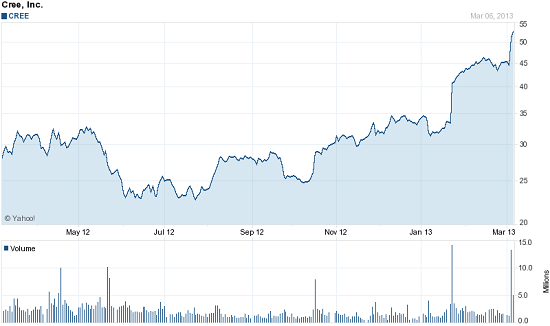 It's easy to see why fortune has smiled on this once-struggling LED firm. The mid-cap leader has carved out a commanding position in the booming LED sector.

Take the case of its $525 million purchase of Ruud Lighting in August 2011. That acquisition has greatly enhanced its position in the rapidly growing market for street lights, hospitals, retail stores and indoor commercial lighting.

Internally, Cree has also become more efficient as its sales have grown. Over the past 18 months, Cree has refocused its operations to improve the bottom line. Clearly, the effort is reaping large rewards.

At the same time, the company improved its R&D process and also has reduced inventories to further drive down its cost structure.

Taken together, these moves have all improved Cree's competitive advantage over challengers from China and other low-cost importers.

They're also making Cree a profit powerhouse. In its fiscal second quarter report, Cree earned $20.4 million. That represented a 69% increase on a GAAP basis from the year-ago period on roughly 14% higher sales.

CEO Chuck Swoboda credits the improved profit picture to both higher sales and maintaining a leaner corporate culture. He also cited another important trend of note for investors -- Cree has improved financial results for every fiscal quarter since 2011.

The Growth of LED Lighting

Meanwhile, the industry's earlier oversupply problem, brought on by Chinese imports, is quickly thinning out, the CEO notes.

Part of this trend stems from a decision by the federal government to phase out the standard incandescent bulb that was a mainstay of American lighting for a century.

That favors LEDs, which are several times more efficient because they create a huge amount of light without wasting energy as heat.

Moreover, LEDs provide much better -- as in both brighter and more natural -- lighting than compact fluorescent light bulbs (CFLs).

And they offer another big selling point -- they work well outdoors. So well, in fact, that car makers are starting to use them in a big way:

Not only that, but Cree has received an endorsement from one of the major stars of NASCAR racing. Richard "the King" Petty decked out his 100,000 square foot garage with Cree fixtures and 700 bulbs (they call them "luminaries").

No wonder Petty pays so much attention to the lighting of his shop. His garage specializes in the restoration of high-performance vehicles, stock cars, drag racers and Petty signature cars.

It's a good fit for Cree. The firm wants to sell more fixtures and bulbs to the nation's roughly 20,000 new-car dealers. Last month, Cree had a booth at the National Automobile Dealers Association annual meeting at Orlando, and Petty was on hand to sign autographs.

"Cree LED lighting delivers the quality of light we need for the work in our garage, allowing us to focus on our business of redoing cars," Petty says. "We turned these lights on, and they made our cars and shop look brand new."

Indeed, Petty made one comment that could just as easily explain how investors who bought shares of Cree in the last several months must feel.

He said there's "really only one word to describe Cree's lights -- wow."

I think Cree investors feel the same thing when they look at that chart.

[Editor's Note: If you liked this article, wait until you see what Michael is writing about next. Right now he's tracking down a "new American technology boom" that could put us back on top while giving investors the biggest wealth building opportunity of the last 50 years. His full report will be released soon. Keep an eye out for it.]

Two years ago I bought an LED light fixture for my kitchen. All of the LEDs flicker like mad, and half of them are burned out. I say good luck to the bridge keepers in San Francisco.

Glad to see Cree come back. I bought when it was almost $70 but held on for the long term knowing the technology has to take a leap. Problem with future is that many will jump into the manf because volume will be huge. Keeping my fingers crossed for these guys.
Nick

Cree stock may be doing well, but my Cree installations don't hold a candle to the Titan LED products I've started installing, all of which use Philips components, which outperform Cree in every way and are 3rd-party tested. Stick with American and buy the Titan LED if you want LED installations with outstanding white light and no maintenance hassles or early burn-out.

They have improved immensely. Much brighter and cheaper. I use them at home and in a retail store. Anxious to reduce my use of electricity. Also known a coal.