When touting his signature healthcare reform law, the "Affordable Care Act," President Barack Obama promised it would "cut the cost of a typical family's premium by up to $2,500 a year."

But a new congressional study says Obamacare has, in fact, increased the average family premium by $3,000 - and that's before the most costly requirements of the law take effect next year.

"Higher healthcare premiums are the last thing single young adults and working families can afford," the report stated. "Yet contrary to what the president promised, that is exactly what Obamacare is projected to do."

The report compiles data from over 30 studies scrutinizing the effect of Obamacare provisions on healthcare premiums.

The chart below estimates increases in unsubsidized family healthcare premiums due to Obamacare by state.

Needless to say, it's nowhere close to what President Obama promised. Take a look at how big your premium surprise could be: 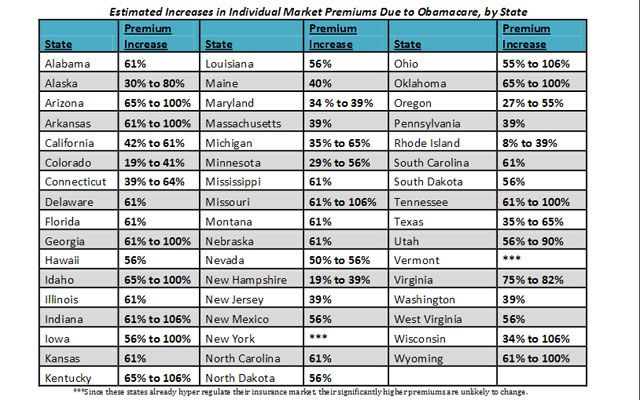 Why would anyone believe such a report put out by the violent opponents of the Affordable Care act?
All republican, indeed.

This Obamacare is a joke. My family is struggling to make ends me now. Most people I know are in the same boat. He is supposed to be helping the working man not distroying him!

You suckers believed Obama's claptrap about Hope. Now pay for it!