Margaret Thatcher, the first woman to serve as Britain's prime minister, passed away Monday, but her wisdom and achievements will live forever in the hearts and minds of fans.

Thatcher earned the nickname "Iron Lady," thanks to her uncompromising politics and leadership style. She served as prime minister for 11 years.

Here are some of her most memorable words delivered during her career. 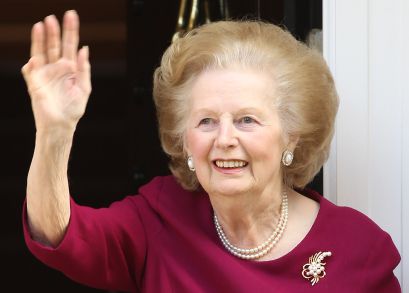 1. "If a Tory does not believe that private property is one of the main bulwarks of individual freedom, then he had better become a socialist and have done with it." Daily Telegraph, 1975

2. "Socialist governments traditionally do make a financial mess. They always run out of other people's money. It's quite a characteristic of them." Speech, 1976

4. "No one would remember the Good Samaritan if he'd only had good intentions; he had money as well." Weekend World, 1980

5. "I came to office with one deliberate intent: to change Britain from a dependent to a self-reliant society – from a give-it-to-me to a do-it-yourself nation. A get-up-and-go, instead of a sit-back-and-wait-for-it Britain."Speech, 1984

6. "My policies are based not on some economics theory, but on things I and millions like me were brought up with: an honest day's work for an honest day's pay; live within your means; put by a nest egg for a rainy day; pay your bills on time; support the police." The News of the World, Sept. 20, 1981

9. "We are not asking for a penny piece of Community money for Britain. What we are asking is for a very large amount of our own money back, over and above what we contribute to the Community, which is covered by our receipts from the Community." Press Conference, 1979

10. "The choice facing the nation is between two totally different ways of life. And what a prize we have to fight for: no less than the chance to banish from our land the dark, divisive clouds of Marxist socialism and bring together men and women from all walks of life who share a belief in freedom." Speech, 1983

Great quotes sharing from the Iron Lady; I particularly like the one, "Pennies don't fall from heaven; they have to be earned here on earth."

"Cut your coat according to the size of the cloth"

Livinstone (Ken) said yeaterday that she smashed Britain's manufacturing… what planet is he from? The West Midlands (possibly Britain's largest manufacturing centres was already dead before she got into Parliament).
I left the Air Force in 1968 and lived in Kenilworth.. Alfred Herbert, at one time the world's largest machine tool manufacturer shares were about 2d (less than 1p) before going bust in 1970. Rolls Royce shares more or less the same before being bailed out by the government mainly because of their aero engine sector.
This country has been doomed by ..
1.- Socialism destroying any "work ethic" in our workforce
2.- Strident Marxist orientated unions forcing up wages until our goods were uncompetative.
3.- Weak, unskilled management
4.- The Welfare State.

120 years ago, Great Britain was the most powerful, richest country in the world. Obviously a couple of world wars did not help, but socialism did the rest… Britain is now finished UNLESS..
We never again vote in a Labour, with or without the ragtag, wet Libdems, and we cut down the ringfence round the welfare state & the National Health Service. We could start by making it a "Health" service. Only treating genuine life threatening illnesses (NO tummy tucks, flab cuts, breast enlargements or correcting enlargements done privately that have gone wrong. NO health tourists, and requiring 5 years "legal" settlement before being granted "free" treatment or medication…JP

I've always admired her and will miss her dearly. She almost single handedly saved Great Britain from itself. Unfortunately a number of Brits are too selfish and nieve(sp?) to appreciate the country they now live in versus what the socialists wanted to continue doing to it.