There's an incredible new trend brewing right now.  And it's incredibly profitable too...

Yes, the markets are pushing a top, earnings are in decline, and consumers are struggling to make ends meet.

That's especially impressive when you consider that this growth - all 775% of it - occurred during the greatest sustained economic downturn since the Great Depression.

You see, the industry - and a company that just went public in July - is set up to benefit from an extreme cultural shift that's gaining speed and strength every day.

I'm talking about the movement towards "real" food-not "fake."

Whether it's the recent reports of "pink slime" in meat, or the stunning rates of obesity worldwide, it's true:  a fast-growing number of consumers are actively trying to eat healthy again.

That's why the organic foods market is booming. And it's not too late to invest in this trend.

In fact, when it comes to the top play right now you can still be one of the "first-in" investors.

Organic food items only account for less than 5% of U.S. food sales, which means there is still plenty of room for growth.

In fact, market researcher Packaged Facts now projects that U.S. retail sales of natural and organic foods and beverages should exceed $78 billion by 2015 - up from $39 billion in 2010.

Better yet, since going public in 1992 Whole Foods, has returned over 3,000% accounting for splits and dividends. 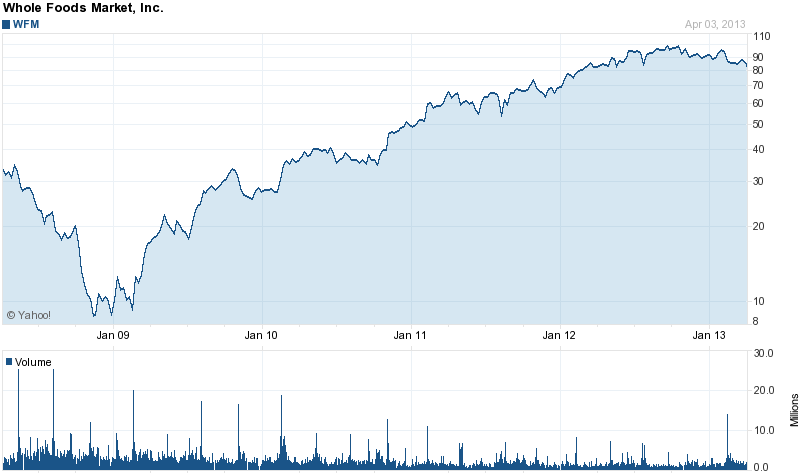 Founded in 1980, Whole Foods Market is the leading retailer of natural and organic foods with 345 stores in the U.S., Canada and the U.K, with over $12 billion in annual sales.

But here's the kicker:  Whole Foods has plans to nearly triple that figure to about 1,000 stores by moving into suburban and other underserved markets.

According to Money Morning Chief Investment Strategist Keith Fitz-Gerald, that's just a sign of what's to come in the organic food industry.

"People are becoming acutely aware of what they put in their bodies" Keith said, "and they don't want it to be genetically modified, full of high-fructose corn syrup, or created with chemicals, herbicides, preservatives, and growth hormones."

Consumers are choosing food and ingredients that are organic-even though they cost more.

The result is a gigantic boon for the entire industry that has created profits for smaller rivals like The Fresh Market (NASDAQ:TFM) and privately held Trader Joe's.

The Next Whole Foods

But there's another organic food company that Keith thinks could double or even triple if one-half of what he sees ahead for this industry pans out.

In fact, Keith believes so strongly in this trend that this recent IPO could easily become "The Next Whole Foods."

As Whole Foods becomes referred to as "Whole Paychecks" among more and more shoppers, consumers will look elsewhere for cheaper organic products.

That's where this company has a competitive advantage with its much smaller stores. As a result, they are able to offer prices 8%-10% lower than Whole Foods.

You may not think this is a big deal, but there's a hidden benefit since it means shoppers don't have to waste their time reading labels. They can rest assured that every last item has been pre-screened before it hits the shelves.

But here's where the payoff really is for investors: the company used the $54 million it raised in its share offering to pay off debt and can now fund its expansion with a clean slate. Very few companies have this luxury.

So how fast can this company grow?  Going forward the company plans to expand its store count by 20% a year.  That's real tangible growth in a down economy.

And with just 60 stores currently in operation and the prospect of 1,000 stores in the future, that's practically like buying Whole Foods at the beginning of its run.

Since the company's stock began trading publicly in July 2012, shares have gained 34.36%. Says Keith: "I don't expect the price to stay so low for long."

To see Keith's full write-up, click here to subscribe to Money Map Report and check out the December issue.

As far as the write up about the next Whole foods market,,,,,,,,,"To see Keith's full write-up, click here to subscribe to Money Map Report and check out the November issue."

It is the December issue not November.

All this info, but no where do I see the "Next Whole Foods" identity revealed.

Correct Mike. Thx for this. Hopefully the moderator doesn't delete my reply. All best in investing.

Wallsten, right on.
Guys, you don't have to bait with this stuff. You will gain much more street cred (and get investors to sign on still) if you cut to the chase and identify he investment straight up. You lose credibility when you don't. In today's fast paced world of knowledge transfer this is 101 and necessary to gain and hold your audience.