Since the start of the recession in December 2007, one in four workers who stopped looking for employment and dropped out of the U.S. labor force found another source of money: collecting disability from Social Security.

And in that same time span, the number of Americans receiving benefits from the Social Security Disability Insurance (SSDI) program has grown by more than 25%.

That's brought the percentage of Americans who might otherwise be working but are on SSDI to 5.8% of the total labor force, compared with just 1.7% in 1970.

Last year, Social Security paid nearly $220 billion in disability checks and related Medicare costs to more than 8.8 million people and 2.1 million of their spouses and children. (Those on disability for two years become eligible for Medicare.)

It's not just aging baby boomers who are adding to the soaring number of those collecting disability. Of the nearly 9 million former workers currently receiving federal disability payments, more than 2.5 million are in their 20s, 30s and 40s - traditionally prime working years.

What's behind the huge increase remains unclear, but statistics show a definite connection between the decrease in the welfare rolls, beginning in the mid-1990s, and a sharp rise in the number of people collecting disability.

Some of these former workers now dependent on disability benefits are afraid to give them up - even if they want to work, they can't afford to lose the security blanket their disability checks provide.

These five charts show exactly how this disturbing trend has been developing - and could deplete the Social Security fund.

5 Must-See Charts on the Number of Americans on Disability

Since 1980, the number of former workers on disability has more than tripled from 2.8 million to 8.8 million today. 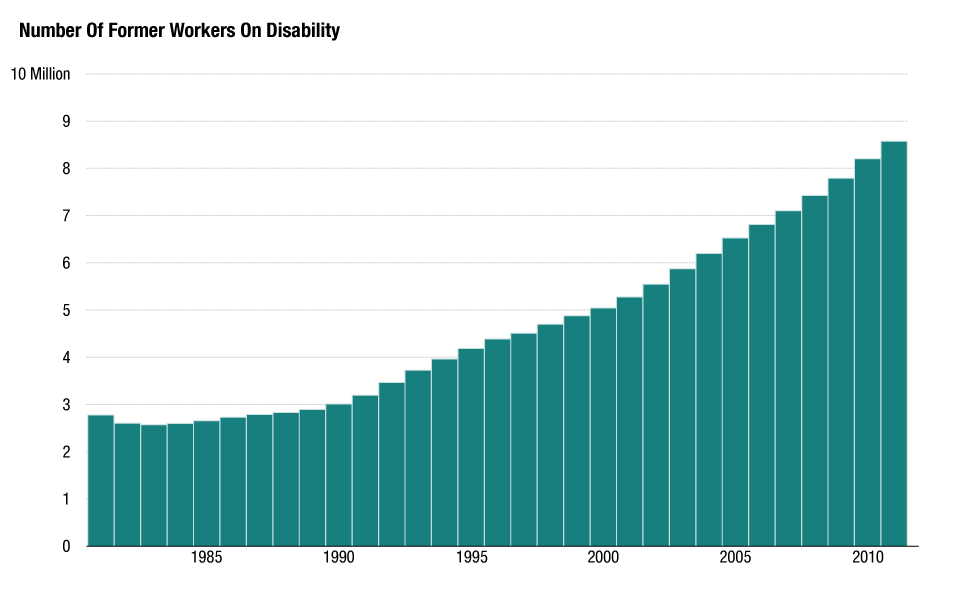 In 1996, President Bill Clinton signed his landmark welfare reform act. The welfare rolls declined, but at the same time, the number of low-income people on disability rose dramatically. 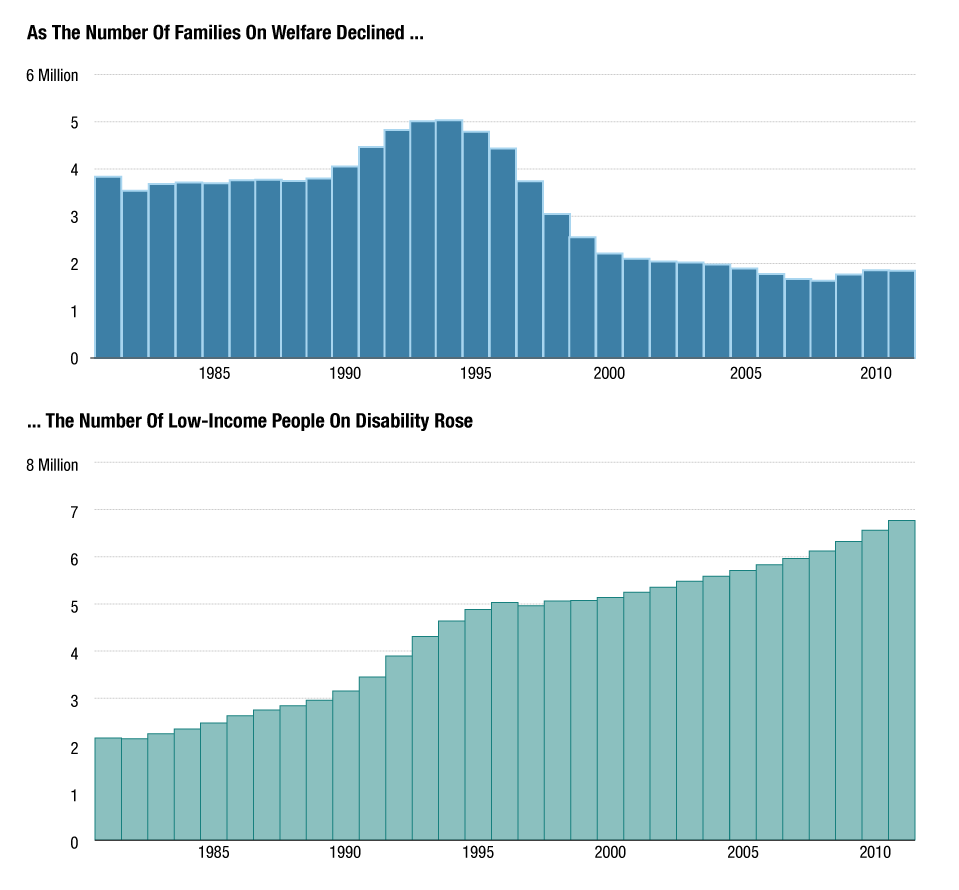 This graph shows that as unemployment increases, so do disability applications. 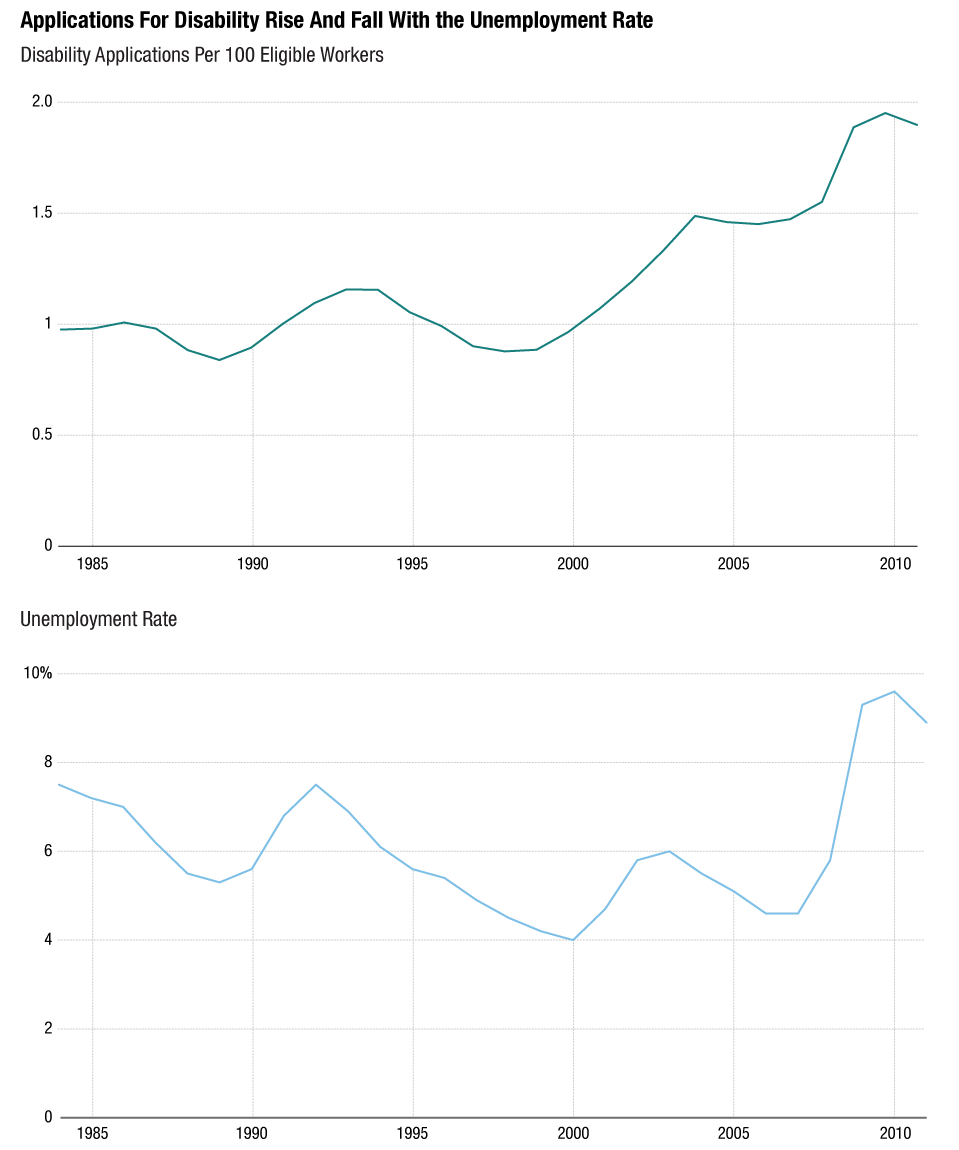 Are you worried about your retirement future, with the Social Security retirement fund rapidly declining? Don't miss our recent story: The Scariest Facts about America's Retirement Crisis

I started to receive my disability check, and supplemental checks in 1990 when I became disabled. I am so blessed to be living off of only $718.00 a month, and living in a two room very small apt. I pay $400.00 in rent, all of my utilities, and I only receive $25.00 a month on my food card, therefore I try to keep my groceries under $100.00, although that doesn't always work out, for I seem to always go over a tad. I try to eat one meal a day, and I'm not starving by no means. I can't afford a car, nor the gas, so I am usually stuck at home, which is a good thing, because it has taught me how to be content. I have no T.V., which is wonderful, kind of like the old days, when folks took time for the real things of life, and I tell you, not having the T.V. has brought me back to reality again, and childhood, and back to true life. It just makes you more positive, and more human. I am never without, and I love my life, and I thank God for all of my blessings! I feel I must also thank the government that I may not always agree with, but do submit my respects to, – in all the best ways that I am allowed to by God, – for every penny that they are still willing to allow, and give to me. I get very good medical care, and I do not spend out that much money to pay for my insurance, and I am very thankful for that also. It does bother me that I am seeing many people, even husbands, and "baby daddy's", with child after child after child, and even husbands, and wives, with three to four children, and the daddy is a lazy, lazy, don't care, won't work bum, who will only work a couple of months out of the year in order to get their tax refund back, and they having so many kids, they of-course get back a big chunk of money. Nobody has any character, and don't seem to want any,any more. Everybody wants to be on welfare? Before I became disabled, I did everything, and the world was mine! I graduated, and won scholarships for Freed-Hardeman University, then went on to Montgomery, Alabama to Faulkner University, did a couple years of summer missionary works over seas, and in Canada. Did missions throughout the N.E., I also got merit raises at my jobs. I worked hard back then in the carpet mills, sometimes for 12 hours a day, 6 days a week, Played the Baritone, and trombone in one of the best bands in the state of Ga., and also played the harmonica with my Dad a lot with his bluegrass band. Later I went back to school, and got certified as an E.M.T. Then one day, it all came to a stand still, but that's ok. At first it was horrible, but I've learned to be content. These people who can get jobs, but they refuse to work, and they just keep taking advantage of the system, and taking money away from people who can't walk, people who are blind, people who have mental illness, people who truly are in pain and agony from blown and ruptured disk in their spines from many years of hard labor in the work force, for these people who can get jobs, but just rather stay home and collect Americas hard earned money, while you set on your lazy hind ends, you are just as much to blame for the collapse of the economy, and the collapse of America. Go get a job. If you can't find a job, then go get a job! Get up, and do something! There is always something to be done, or someone who needs your help. Go to the grocery store and open up the door for the elderly, or whatever. When it all comes to a complete crash, then we all will have to help each other.

I should think it far more relevant to display data in relative terms (e.g., to both US population at large and US working-age population) than in absolute terms, for the latter do not reflect the population growth in the US and the possible aging of the population.

Thank you for caring for AMERICANS when needed most. GOD is love.