With a little sleight of hand in how the government calculates inflation, the Obama budget 2014 released today (Wednesday) proposes to both raise taxes on the middle class and reduce future payments to Social Security recipients.

That's quite a reversal coming from a Democratic president who had promised to protect the American middle class.

In the past, U.S. President Barack Obama has focused his desire to raise more federal revenue on the rich, who he has repeatedly said "need to pay their fair share."

But the reality is that the wealthy citizens of the United States don't have nearly enough money - even if all of it were taxed - to solve America's many fiscal problems.

Practically speaking, there are only two ways to attack the trillion-dollar deficits that have plagued the country: massive spending cuts or massive tax hikes on the middle class.

The Obama budget 2014 offers some token reductions, but putting the middle class in the budget crosshairs is a new and ominous White House strategy.

"While it's not my ideal plan to further reduce the deficit, it's a compromise I'm willing to accept," President Obama said on Saturday in his weekly address.

Oh, and don't expect much resistance from the Republicans on this, despite their historic opposition to tax increases. Last year, it was Republican leaders talking up the need to adjust the Consumer Price Index (CPI).

The Stealthy Thievery in the Obama Budget 2014

Taking more money from the struggling American middle class is bad enough, but the way the Obama budget proposes to do it is downright sneaky.

The government started tinkering with the CPI as far back as the mid-1980s in what it claimed to be a better reflection of inflation, but in fact merely served to mask how fast prices were actually rising.

The idea was that consumers changed their buying habits in response to higher prices, and so were less affected by inflation.

Instead of measuring how much money a person needed to afford a steak, the new adjustments assumed the person would switch to a cheaper form of beef, like a chuck roast or hamburger.

The new "chained" CPI in the Obama budget 2014 takes that a step further and assumes a consumer switch to an entirely different, less expensive product - like macaroni and cheese.

The upshot is that it lowers the CPI number, which is used to calculate the annual cost-of-living increase in Social Security benefits. Over time, it adds up to a lot of money that will come out of the pockets of retirees.

The AARP has created a chart that shows just how much the change would cost a person in their "golden years." 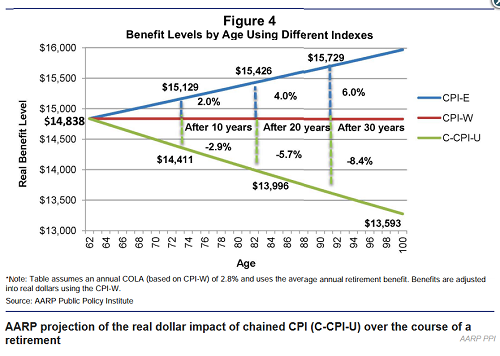 Middle-class workers will get hit by the Obama budget if the chained CPI is applied to income tax brackets, which would result in incomes rising faster than the tax bracket thresholds.

The Congressional Joint Committee on Taxation has determined 69% of the gains from using chained CPI for income tax brackets would come from Americans making $100,000 or less - the middle class.

Obama Budget 2014 Hits Those Who Can Least Afford It

This double whammy to fixed-income seniors and middle-class workers will pick the pockets of two groups already having a tough time financially.

Middle-class workers are still trying to cope with January's 2% payroll tax increase. And that came on top of four years of declining income - according to census data, median household income fell by $3,850 a year from 2009 to 2012.

Retirees, now and in the future, will struggle to live on lower incomes. And unlike some proposals to "fix" Social Security, the chained CPI plan would affect seniors now, so there's no opportunity to plan for the change.

"What's so surprising about the momentum behind chained CPI is it's the only time anyone has put on the table a cut to current benefits for deficit reduction," Cristina Martin Firvida, the director of financial security at AARP, told Business Insider. "It's not a phase-in. You're already retired."

Future retirees, particularly Baby Boomers, may miss that income even more. In a recent survey by TD Ameritrade, 74% of boomers said they would need to "rely heavily" on Social Security in retirement.

Ultimately, the Obama budget 2014 proposal to use chained CPI is simply a backdoor way to try to address Washington's out-of-control spending on the backs of the middle class and especially senior citizens.

"We will have to work a lot longer and get by with less," Olivia Mitchell, professor of economics and executive director of Pension Research Council at Wharton School of Business, told USA Today.

STOP with the 2% payroll tax INCREASE already…….that was a temporary REDUCTION in the dollars that go into Social Security, for the employee's future retirement. On top of that, it is the amount that EVERYONE has paid for YEARS and was just a ratchet back to what is the normal deduction. so GET OVER IT

I am confused. Does this story imply that, just because the rich don't have enough money to solve the whole deficit problem by themselves, this budget will not require them to help at all? Will ALL the tax increases fall on the middle class? Also, it is my understanding that Social Security is funded by a trust fund that is entirely separate from the budget; no money from outside this trust is used to pay Social Security benefits. Thus, any money taken from Social Security benefits to pay down the deficit is STEALING from the trust fund and thus from the people who pay into it with their payroll taxes. And we all know how regressive those are. How about, at least, eliminating the cap on income to which FICA tax is applied? Right now, people like Mitt Romney and others who pay taxes (if at all) at the so-called carried interest rate, and FICA amounts to a percentage of their income that is tiny compared to the percentage we pay. And, while we are at it, how about eliminating the egregious breaks from failure to tax off-shore accounts of individuals and non-repatriated off-shore income of corporations, to mention only a few additional tax income sources that the rich should be providing. I, for one, am sick of the rich whining about their of-so-onerous tax burdens. Look at it this way: if a fat cat gets taxed 33% on his last $15 million, he still has $10 million left, but if an ordinary citizen is taxed 33% on his last $15000, he has only $10000. left. Who gets hurt worse? I think the rich can afford to pay their fair share and do what they can to relieve the burden on the middle class. And note that the regular guy is likely to put a significant amount of that $10000. back into the economy or into savings for his retirement, when it will be sorely needed to supplement his diminishing Social Security benefits.

You can tell this person is a democrat leaching off the system. Get a Job, oh that's right you can not find a decent one any longer due to obsessive regulation. Business like mine are almost out of business because we now must pay this and pay that, and give this and give that on top of all that all us business owners are afraid of one person suing us for hot coffee or falling through a roof we contracted you to fix. I am a small mom and pop business trying to survive not some multi millionaire cooperation.

When I and other small mom and pop business are forced to close its doors after 25 years. I will tell my employees who I love them dearly think next time who you vote for. You are getting exactly what you earned less, and less, and less each year until you get nothing.

You mean you bought in to that garbage you were told. I will fix this and fix that. Thats your own stupidity.

Stop blaming every business owner like me who has slaved day and night, lost his wife and his kids as a result of trying to make a better life through creating a business and jobs while you sit on your lazy butt in many times collecting more then my employees working full time.

You should be thanking your employer.

Go to school, get and education be a productive member of society instead of a bum. Many mom and pop business owners continue to play active roles many times 16 hours a day in my case just to survive.

Its people like you who make us business owners just want to close there doors, throw there hands in the air and say I give up then the thought of pink slipping 20 employees breaks my heart because I know how much they are counting on me and others like me.

When your fired, laied off, furloughed because your employer can no longer run a profitable business you can thank yourselves for it.

With an attitude like that I think we can only hope you go belly up. You're wife and kids left because you are a jerk, not a successful business owner. Now you'll be unemployed without a family. Hope that works out well for you.

Wow! Why not just kill the "rich" and confiscate what they have? That should settle it, right? Nobody allowed to be rich anymore.
Here's a piece by Anthony Robbins, a pretty liberal fellow.
(Search YouTube for "The National Debt and Federal Budget Deficit Deconstructed – Tony Robbins.)

While I agree that, yes – 33% from wealthy affects their ability to sustain themselves far less than middle income folks, those of the "rich" who are actually business owners are helping the economy and employment. Wealthy individuals who are business owners and employing people should be given breaks over those who choose to simply silo their personal wealth.

So what will the people who already are eating macaroni and cheese switch to?