For years, Larry Ellison's company has made some of the best software on the planet.

With a market cap of $155 billion, Oracle Corp. (Nasdaq: ORCL) has also become one of the industry's leading buyout shops, snapping up dozens of companies in the past five years alone.

But while Oracle has been expanding its software empire, it was late to latch onto one of the hottest new tech trends in many years.

And now I'll bet you any amount of money Larry Ellison wishes he had learned how to tap into the power of the cloud years earlier.

The respected research firm Forrester predicts the cloud computing industry is going to increase from about $41 billion in 2011 to $241 billion in 2020.

That's an increase of roughly 487% over a nine-year period.

The problem for Ellison is that a small-cap tech stock I've discovered has beaten him to the punch.

In fact, I'd be willing to say at this point it's running circles around him.

So what is cloud computing?...

No doubt, cloud computing is a bit of a fuzzy term for most investors. So, I'll simplify it for you: The "cloud" generally refers to hosting data and applications offsite, often by third parties.

In other words, it represents the shift from PCs and laptops holding all the information people need to storing much of it at remote locations. That means it also includes the Web and private clouds, which are also known as remote data centers.

Admittedly it's not as fascinating as the return of the "Six Million Dollar Man." But make no mistake, this is a huge tech trend you can make money off tomorrow-not years down the road.

Cloud computing allows corporate IT departments to get leverage to more services and productivity tools without buying and running their own computer servers and related gear.

And even if the Forrester prediction comes up short, and true sales come in at just one third that estimate, we're still talking about massive growth by the end of this decade.

Why Ellison was so late to this trend is something that's hard for me to fathom.

But it's one of the central reasons why Oracle's recent earnings report was weaker than what the Street had expected. In a relative rarity, Oracle earnings actually missed last quarter.

The bad news sent shares of Oracle skidding by more than 11% in the five sessions after the poor earnings news. The truth is, in the past two years Oracle is down some 3%, while the S&P 500 is up 18%.

That means you'd have done better with a simple index fund than putting your faith and hard-earned cash into Oracle.

Now, after getting rave reviews for being so witty and irreverent in the jokes he made about the cloud back in 2009, Ellison may never live them down.

Against this backdrop, there is one small-cap cloud computing company that had no trouble recognizing a brilliant opportunity when it saw one.

This veritable "David" is a company called Datalink Corp. (Nasdaq: DTLK) and it's putting Ellison's "Goliath" to shame when it comes to the cloud.

With a market cap of only $209 million, Datalink is on an absolute tear.

In its most recent financial report, the firm said it grew some 24% in the quarter alone. Meanwhile, thanks to a heavy investment in cloud, Datalink shares are up 76% in the past two years. 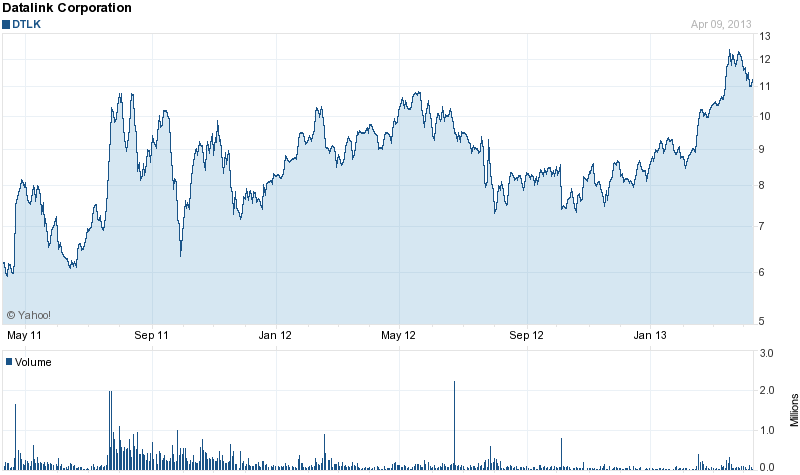 Now this is exactly the kind of small-cap firm that I try to find.

In this case, since Datalink still has plenty of room to grow sales and earnings, its stock price is nowhere near all-time highs.

The key is that as a competitor with Oracle and other big computing firms, Datalink has found a very simple sales angle. Datalink enables firms to convert their existing data center into clouds without a lot of the normal headaches and snafus.

To me, this is a ready-made market because thousands of clients are interested in moving to the cloud but don't just want to write off all the money they've already invested in their data centers.

That's where Datalink's "On Demand Labs" comes in. This service lets potential buyers design and test a working cloud before they have to make any major investment decisions.

Think of it as a test drive, but one with a great upsell opportunity attached. The firm also helps clients implement the final plan, complete with metrics to show other execs just what to expect as part of the conversion.

One of the biggest boons for cloud services is in the key role it can play in marketing. And that's obvious from just a quick glance at Datalink's website.

As such it is targeting Fortune 500 firms with an eye toward repeat business. Of its roughly $500 million a year in sales, about $160 million stems from recurring service contracts.

And the best part is, the stock is still cheap. With a recent share price of around $11.25, DTLK trades at just 10 times forward earnings and just .42 times sales with a PEG ratio of only .59.

Of course, no stock is ever picture perfect. As a long-time tech investor I'd like to see higher profit margins and better returns on assets and equity.

Having said all that, I still think Datalink has plenty of room to run. We're still in the early stages of the cloud build-out, and this small-cap leader has found a way to put the Big Boys like Ellison back on their heels.

[Editor's Note: If you'd like to find out about more cutting edge companies like Datalink, Michael's Era of Radical Change newsletter is a great place to start. And you can't beat the price. You can get it for free by simply using the sign-up box below]

CFO/CEO buys in Feb and sells in Apr. I like this stock, but closer to $10, hopefully under that!

I think Larry Ellison is seeing what you, and many others, are not. The cloud sounds like a good idea if you don't mind giving all of your confidential information to a third party and trust that that third party is going to be able to protect your information indefinitely. What I see driving cloud computing is the smart-phone and tablet trend, where people don't want to carry around the heavy, bulky hardware needed to perform all of the tasks that they desire in their simple worlds. For them cloud computing makes sense. But the minute that you move confidential information of your business and possibly the confidential information of your clients to a third party, the game changes. Your clients and customers are trusting you the businessman to keep secure and confidential, any and all information that they entrust to you. The minute that you give that information to a third party, your liability as a businessman goes up.
What will happen when one of these cloud computing centers is hacked by some 15 year old who then posts all of your confidential information on the internet? Don't say that it can't happen. Banks are getting hacked all of the time but we just never hear about it because of the bad P.R. that it would create if that was public knowledge. Banks just pony-up the lost cash to their clients and the incident is hushed. But it won't be that simple when a cloud-computing center is hacked.
Thank you, but I will keep my personal and client information on my own server that gets shut off and unplugged from the internet every time that I am not here to see what is happening on my computer.

I agree with you, Jeff. Cloud computing is open and available to any potential hackers. And you are right, companies are getting hacked into. So is my own network at home or at work.

Cloud is here to stay and will only become more prevalent. People need to back up their information and cloud is inexpensive and, more importantly, portable. Employees and contractors need to share their information with each other. Cloud makes it easy.

I don't put passwords and personal information like social security numbers and previous addresses on the cloud. But everything else needs to be in a place that is away from my office and home so I will have it available to me if there is an issue with my home or office computers.