I was honored to be in St. Paul's Cathedral attending Margaret Thatcher's funeral last week. It was quite a special opportunity to pay tribute to Britain's longest-serving prime minister in person, and the ceremony provided a reflective occasion on her influential leadership and unwavering conviction.

As her country faced an economic crisis with high inflation, high tax rates and hundreds of mining strikes, the lady's iron courage helped her make the difficult decisions that steered the United Kingdom to a more sustainable path.

A steely resolve seems to be lacking in many of our world leaders today. Maggie led the U.K. down the path of privatization, encouraging entrepreneurship and free markets because her belief was that "Socialist governments traditionally do make a financial mess. They always run out of other people's money."

In his recent webcast, Global Portfolio Strategist Don Coxe points out the effectiveness of this privatization path, showing the rise in the U.K.'s real GDP from the time she was elected Leader of the Opposition in 1975 through today. 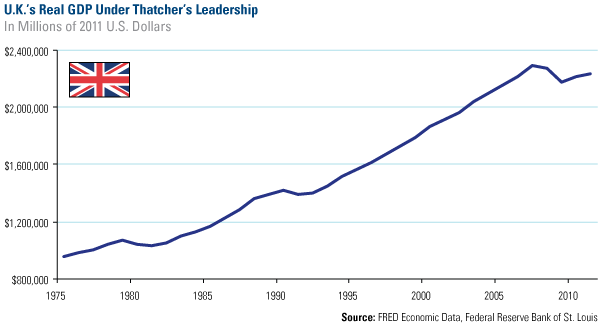 After spending a few short days in London, I flew back to the U.S., landing in New York City to work with the International Crisis Group. U.S. Global Investors has been a strong supporter of the ICG, which works to resolve conflicts around the world and promote peace and prosperity.

I also met with several business leaders while in The Big Apple. For those of us in the investment business, we all have the same question on our minds: What's going on with gold? How can governments' balance sheets continue to expand like we've never seen before in history, yet the price of the metal melt so quickly?

We noted numerous reports indicating that there's a shift taking place in the gold market, with investors discarding the gold ETF, preferring physical gold instead. Take a look at Zero Hedge's chart. On one day alone, April 17, buyers scooped up a record 63,500 ounces from the U.S. Mint. This is equivalent to 2 tons of gold, "more than the previous two months combined," according to Zero Hedge. This is a drastic move compared to recent history. 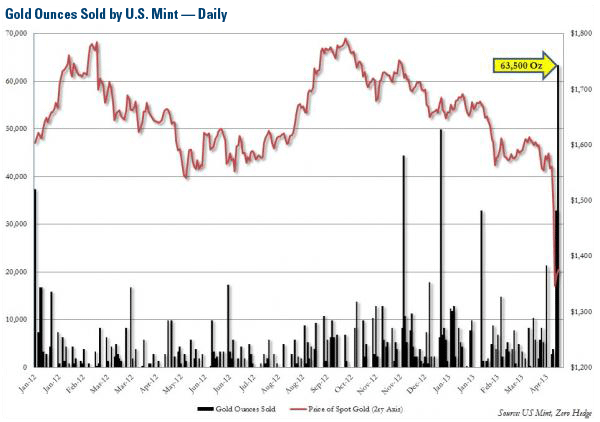 The U.S. Mint is generally the last place gold shoppers buy their ounces because they have to pay "a hefty premium" for gold. It's like going to 7-Eleven on Christmas to buy AA batteries for the electronic toy Santa left under the tree.

However, gold shops such as Apmex or Gainesville Coins aren't closed; rather, gold customers end up buying from the U.S. Mint because "nobody else has any physical [gold] at a lower premium to spot (or any metal in inventory)," says Zero Hedge.

So, even with the gold price dropping, why are gold coins selling at a premium? It's Economics 101: The coin supply is limited and the demand is high.

This buying trend isn't only occurring in the U.S. In Bangkok, Thailand, for example, crowds of buyers were filling stores, eagerly waiting in multiple lines to purchase gold jewelry and coins. According to The Wall Street Journal, "Gold shops from Tokyo to Dubai have witnessed frantic buying of the coins, alongside other items such as gold wedding bracelets. The surge has been triggered by cheaper prices."

China Daily reported a similar buying enthusiasm occurring in jewelry stores in Beijing, Shanghai and Guangzhou. Shanghai's newspaper reported that "while gold markets in the United States and Europe saw panic selling, sales of gold bars and jewelry jumped in China as buyers viewed the lower prices as an opportune moment to invest."

To put it simply, for retail investors in the west and east, gold went on sale. A Black Friday special for the yellow metal in spring.

We believe the yellow metal is experiencing a short-term correction during its long-term secular bull market. Compare today's gold bull run to the spectacular gold bull market in the 1970s. From February 1975 to August 1976, gold fell 44 percent. However, those investors who held tight to their gold were rewarded: From August 1976 to January 1980, gold rose an astounding 700 percent.

This time around, gold fell 28 percent over nearly the same period. 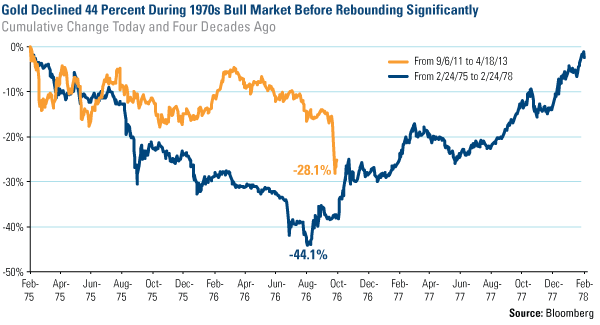 This chart holds a mixed message for investors. On the one hand, if history repeats itself, gold could fall as far as $1,050. The positive message, though, is that history teaches us that gold can withstand a 44 percent decline and rebound substantially.

As Roman philosopher, Marcus Tullius Cicero, wisely said, "Never go to excess, but let moderation be your guide." Cicero's advice applies to life as well as when investing in gold. What I wrote in The Goldwatcher back in 2008 remains valid today:

"We put a lot of messages into the marketplace, but the one we stress most when it comes to gold is moderation. Don't try to get rich with gold because the corresponding risk is simply too high. Gold is a volatile asset whose daily price action can be far more dramatic than blue-chip stocks and many other asset classes."

This is very informative. Thank you for sharing this post. I have heard that the prices for gold now has drop and there are several people buying jewelries and there are also a number of them selling there golds. I wonder what would be the direct cause for this to drop? and is there a possibility for this to rise up again?