If you thought Americans were better off financially than a few years ago, the following chart shows that's not the case for most of us.

Instead, it looks like an economic recovery for the rich. 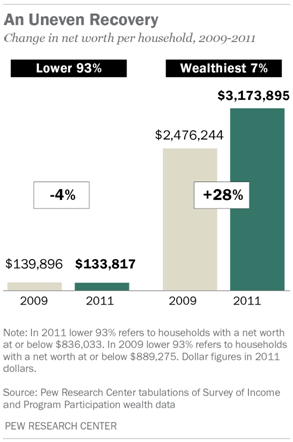 "The income recovery thus far for a wide swath of U.S households has not existed," Richard Fry, senior research associate at the Pew Research Center, told the Huffington Post. "One of the reasons is because most Americans households own a home [and] very few own stocks."

Indeed, among households with net worth of $500,000 or more, 65% of their wealth comes from financial holdings such as stocks, bonds and 401(k) accounts, while only 17% comes from their homes.

By contrast, for households with net worth under $500,000, just 33% of their wealth comes from financial assets and 50% from their homes.

Bottom Line: If you're not already invested, you need to be in the market and in it for the long run.

17893 Reads
These 3 High-Yield REITs Pay 8%, 10%, and 12% Dividends
REITs produce gobs of cash from rent and other fees generated from properties including office buildings, storage units, multifamily units, and more.