We've just marked the third anniversary of the Flash Crash of 2010.

By 3:07 p.m., the losses had reversed and the Dow picked up most of those 600 lost points. In just about 20 minutes, the Dow had lost close to 9% of its total value - and then regained it.

But those 20 minutes were a virtual eternity, during which nearly $1 trillion in market value essentially disappeared.

Trades could be had for truly cartoonish prices. For instance, shares of The Procter & Gamble Company (NYSE: PG) - the bluest of the blue chips - famously dropped 37% in all, while Jim Cramer provided running color commentary as the stock plunged from $61 to $47, screaming, "It's Procter & Gamble... Just go buy it! That's not a real price!"

Reporters out on the floor began waylaying anyone at a trading desk, getting fractured, distracted sound bites.

Viewers could hear frenzied, bloodcurdling man-shrieks of "Buy! Buy!" over their coverage, as the talking heads began muttering darkly about "the capitulation." Such wonders were very common during those 20 furious minutes, as the New York Stock Exchange began to resemble nothing so much as the Fall of Saigon - without all the helicopters.

After 3:07 p.m., when the losses had begun to reverse, officials and technical experts on the trading floor and at the Securities and Exchange Commission were at a loss to explain the phenomenon. Something really weird had happened. Was it a virus? A malicious attack? A plain old glitch? There were calls for an investigation, to put it mildly.

It was none of these things. Systems, or their various components, actually worked more or less as intended. And that was the whole point. The system, a key component of it, functioned normally... and wiped out $1 trillion.

Living On a Thin Line

These semi-anonymous mega traders employ powerful computers and sophisticated algorithms to capture profits a few fractions of a cent (or other currency) at a time. They bombard the markets with scores of millions of quotes - most never meant to be executed. The effect of the sheer volume and nature of these orders is, in essence, manipulative.

One-hundredth, even one-thousandth of a cent per trade. That's a hard dollar, for sure. But a high-frequency trader might take up and exit tens of thousands of positions - maybe even more - in a single trading day, grinding out fractions of a penny at a time.

A few tens of millions of trades like that, and pretty soon you're talking serious money. Portfolio manager Irene Aldridge says, in an understatement, that those fractions of a cent can add up to "significantly positive results at the end of every day."

Money Morning's own Shah Gilani has another, somewhat less charitable way of putting it, calling high-frequency trading "an abomination."

Bloomberg has found that sometime in the spring or summer, Hibernia Atlantic will start laying cable for Project Express - a new trans-Atlantic cable which will shave milliseconds off the current 60 milliseconds it takes for information to travel between the East Coast of the United States and Western Europe. Project Express is being built expressly for traders at a cost of $300 million. High-frequency traders will surely make very good - and profitable - use of those milliseconds.

High-frequency trading seems to be here to stay, despite opposition from those who say that eliminating it would lead to trading at a more human, and thereby stable, pace. In the meantime, they'll keep on keeping on, eking out a few hundredths of a cent, millisecond after millisecond, day after day, faster and faster, leaving mere human traders choking on the dust.

But how did high-frequency trading contribute to the Flash Crash of 2010?

The SEC and the Commodity Futures Trading Commission issued a report titled "Findings Regarding the Market Events of May 6, 2010." That report asserted that high-frequency trading played a big role in the Flash Crash. Its role would be, simultaneously but in different places, perpetrator, enabler, bystander and even victim.

That 800-pound gorilla of a hedge was executed by a computer program - a flawed computer program. Waddell & Reed had executed similarly sized trades before, using a combination of manual order entry and computers. The trades took about five hours to execute at that time, but on May 6, 2010, the algorithm executed the trade in just 20 minutes.

High-frequency traders, sensing some opportunity, hopped on the bandwagon as the E-mini came under intense pressure in a relatively short amount of time. At that point, the decline spilled over into equities.

The report went on to say that the computer program behind this one sale basically blew away most of the buyers on the market. Market liquidity dried up, and some high-frequency traders exited the market because "the automated systems used by most firms to keep pace with the market paused." They paused because the computer systems detected a big spike in buying and selling. Still other high-frequency traders stayed in, andpunched the selling up to Warp 7.

The cumulative result was the Flash Crash, with high-frequency traders on both sides of the problem. The Flash Crash ended as the Dow recovered most of its losses, with most stocks on the index closing down about 3%.

The Flash Crash was just one extreme example of high-frequency trading run amok.

We recently saw a mini-Flash Crash when a hoaxer compromised an Associated Press Twitter account. The tweet, "Breaking: Two Explosions in the White House and Barack Obama is injured," was quickly spotted as a fake. But the lightning spread of this fake news, coupled with the natural "Sell!" reactions of every trader - including high-frequency traders - led to a steep, rapid selloff in the markets.

As before, sanity reasserted its fragile grip, and the markets recovered, but the potentially horrible synergy between viral hoaxes and high-frequency trading and a twitchy market was laid bare.

Stocks come under attack by high-frequency traders every day, targeting a stop-loss here, a sell order there. When high-frequency traders target index funds ahead of a mutual fund rebalancing its portfolio, they can anticipate the changes in price and "eat into" the fund's performance, diminishing your return. Since high-frequency trading is essentially manipulative, that shouldn't come as a surprise. We just don't hear about it when it happens to a stock here, or an ETF there, over the course of a "normal" trading day.

As long as toothless regulators embrace high-frequency trading, claiming it has a vital market-making and liquidity-providing function, the markets will still be at at risk, forever unfair. Even more disconcerting is the thought of just who stands to lose the most when high-frequency trading runs the day right off the rails.

That's your portfolio out there. Can it stand up to 1,000-point swings that might not bounce back in 20 minutes? Is it strong enough to withstand an onslaught of unfeeling machines helmed by craven one-hundredth-of-a-penny grabbers? When will the next Flash Crash happen, and just how bad will it be?

Unfortunately, due in part to high-frequency trading, it's not a question of if, but when.

Do you remember the market chaos that ensued three years ago? Did you get burned by Flash Crash 2010? You're invited to reminisce about the #flashcrash or find out more about #highfrequencytrading on Twitter with us @MoneyMorning. Just don't try to pull any hoax assassination tweets! If you've got memories of the Flash Crash to share, visit us on Facebook and drop us a line on our wall.

This video captures the light-speed process of high-frequency trading, and slows it down for the human eye to see - and the human mind to comprehend. The activity and the concepts behind it are nothing short of stunning.

The action in the video you're about to watch takes place in just half a second of real time. That's just slightly longer than it takes a person to blink an eye, or for that person to fall about four feet. 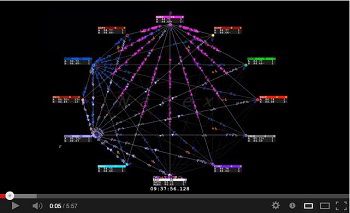 We can easily see the blistering speed. The time stamp at the 6 o'clock position captures milliseconds - that is thousandths of a second - of time, and we can see it advance. Just above the time stamp, we can see the National Best Bid/Offer and the virtual "ticker tape" of the Consolidated Quote System. At this hyper-slow speed, we can watch as the price changes dramatically from one millisecond to the next. In this context, it's easy to understand why so much money is being invested in infrastructure, such microwave towers and trans-Atlantic cables, to make communications run milliseconds faster.

Each of the 12 boxes represents an exchange, with orders flowing through the interconnected systems. If any of the connections aren't working perfectly, small discrepancies begin to crop up. This represents opportunities for high-frequency traders to arbitrage the many miniscule price differences - and bank huge profits, one fraction of a cent at a time.

Let us know what you think of #highfrequencytrading. Engage in some old-fashioned slow, written communication, and join the conversation on Twitter or Facebook.