Money Morning's Chief Investment Strategist, Keith Fitz-Gerald has kept our readers on the bleeding edge of developing financial stories for nearly a decade.

Keith's broad and deep knowledge of the global financial markets – he splits his time between residences in the U.S. and Japan and sees far more than your U.S.-locked analyst – gives him a unique perspective on how the macroeconomic patterns affect the micro environment in which individual investors make their decisions.

He recently returned from Europe and was featured on Fox Business with Stuart Varney. We caught up with Keith just as he returned from the studio with our own questions about his trip, and asked him to share his insights with Money Morning readers.

Keith sat down with Private Briefing's Executive Editor Bill Patalon over the weekend.

Here's what Keith had to say…

Bill: Let's start with Oskar Lafontaine. He was Germany's Finance Minister and helped create the euro. Now he's saying that it's time to abandon it. Are you surprised?

Keith: Not entirely. Lafontaine has proposed abandoning the euro because struggling countries have not been able to devalue their way out of the crisis. The theory is that competitive devaluation helps make a country's exports more competitive in global markets. The problem is that if everybody is still part of the euro, nobody can do that.

What I think he's missing is that the euro already has effectively split. Deposits trapped in Cyprus, for example, are limited to specific transactions and withdrawals. Cash outside the banking system is being used on the black market because any sort of organized transaction that moves it back into the system – a bank deposit, an ATM transaction, a credit card payment, something as simple as a paycheck deposit – puts it at risk.

Obviously, that's an extreme example, but France, Germany, Italy, Spain, they're all experiencing variations of the same thing. The cash outside the system is growing and goods are being priced differently to account for that. "Black money" transactions are growing at the same time. This is further pinching the euro.

Anecdotally, I noticed a decided preference for cash on this trip by merchants, vendors and others so it would seem the concerns are spreading.

B: European Central Bank (ECB) President Mario Draghi said in a speech Monday that he will maintain accommodative monetary policies and that the ECB will act again to stimulate growth if needed.

K: I think that's code-speak for he's going to print more. The markets thought the same thing, dropping the euro like a hot potato. Oil rose, and so did gold on his comments, which means the markets perceive this as inflationary news.

Stocks will rise as well. As long as he's willing to keep the gas on, the markets are going to generally claw their way higher. The situation is very similar to the United States markets which continue to run despite still-fragile and badly damaged fundamentals, debt, and out-of-control politicians who'd rather tax everybody than rein spending in.

B: Against all odds, Europe has held together, but at a cost. Are you still a euro-skeptic?

K: Yes. I'm very leery any time a large political power structure results in such concentrated decision making. Like an inconvenient marriage, the danger still remains that the EU is a political union rather than a truly economic one.

As long as the banks of member nations have the ability to independently finance their own liabilities, this won't change. I don't think Europe is going to fail, but I certainly don't see it operating on a truly continental scale the way it once did either.

B: What is Europe's future?

K: I think the path remains one of two economies: the haves and the have-nots. Polish Foreign Minister Radek Sikorski recently made a very pointed observation, noting that the European Debt Crisis hit before the EU has developed the necessary institutional framework to deal with it. I agree.

But, it's too early to assume that fiscal irresponsibility has been bred out of the system there. If anything, Draghi's willingness to remain accommodative makes things worse in the long run.

B: You recently came out swinging against those who say austerity failed in Europe. Why?

K: I don't think you can declare victory while the fight is still on. History shows that austerity is the ultimate solution. The only question is whether it's implemented by the markets involuntarily or by the politicians voluntarily.

It's also a matter of how you define the term. Take Germany's labor reforms a few years ago. If those were done today, they'd be called "austerity" and fought over in the streets. Yet, those reforms are what gave the EU the strength it needed to weather the financial crisis.

B: Is that true in the United States, too?

K: Absolutely. But again, this comes down to how you define the term.

In this country, people hear the term austerity and they go apoplectic because they immediately envision abandoning the elderly, the infirm, and cutting off those in need.

In reality, austerity can mean many things, not the least of which includes targeted spending cuts that cut the fat out of big government. There's no need for our society to bear the brunt of this crisis when it's the politicians who got us into this mess that ought to be held accountable.

What happened to government by the people, for the people? This is government at the people. Washington needs to realize that it screwed up badly and get out of the way. A return to what made this country great is in order: a sound currency, a smaller government and less regulation at every step of the ladder.

The United States is far too complex for any single group of people to know what will succeed. Free enterprise has always produced more wealth than government. Dragging the crisis out in an attempt to avoid financial pain is a mistake. Every delay further entrenches crony capitalism and increases corruption, which is something Minister Sikorski also highlighted and another point of agreement.

B: Is Europe a dead end for investors at this point?

K: I don't think so. But it is at a very dangerous inflection point and one that's tied directly to the United States. Here's why. Both the EU and the United States have effectively become "nanny states" and capital is fleeing both in record amounts. It's bound for the dynamic economies of China, Greater Asia, South America and, within a decade, Africa, although that's hard for most people to imagine today.

You'd think this is a matter of politics or fiscal malfeasance. Certainly those are arguments I hear all the time. But in reality, the truth is simply a numbers game.

The economic center of gravity is shifting east and has moved more in the past decade than it did in the past 1,000 years. To believe things are going to return to the way they were is naive and dangerously unrealistic. 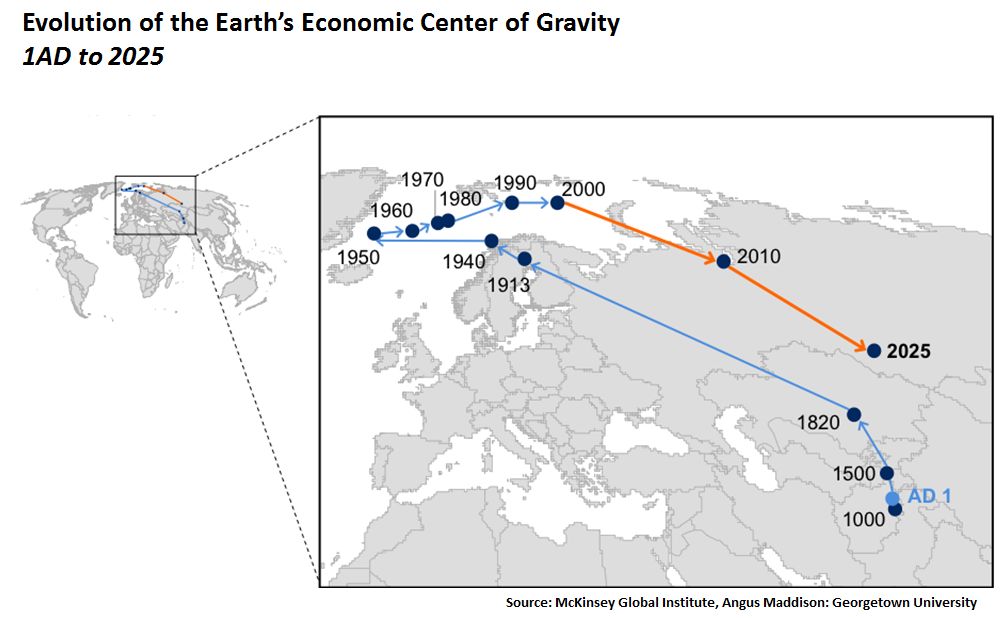 B: What does this mean for investors?

K: First, more printing favors higher gold prices ahead. Bear in mind that central bankers are doing their best to fight this because they don't want the world to lose faith in fiat (i.e. paper) currencies but eventually the markets are going to win out. I favor bullion and ETFs over miners at the moment because the price action is better and more liquid. Each new drop represents a better buying opportunity in that sense.

Second, I expect the euro to fall further, especially versus the dollar. It's not that the dollar is anything great at the moment, but it's the best looking horse in the glue factory.

Third, U.S. equities are stronger than European equities generally speaking, so right now we're emphasizing them in our sister publication, The Money Map Report. Especially the large caps, because they typically have much stronger balance sheets, better brand positioning and more experienced management.

If you're determined to own European equities, however, the best choices are those with global sales and a firm foot in two key markets: Asia and South America. Examples include ABB (NYSE:ABB), BMW (Frankfurt: BMW), Volkswagen (Frankfurt: VOW) and Nestle (OTC: NSRGY).

ABB and Nestle are Swiss and BMW and VW are German. That's not by chance. Germany and Switzerland are among the haves we just discussed. Further, production data and local economic strength speaks to higher performance ahead, whereas the balance of Europe is going to be playing catch up.

European banks like Societe Generale (OTC: SCGLY) and HSBC Holdings Plc (NYSE:HBC), for example, are the standouts this earnings season but I wouldn't touch them with a ten foot pole until we can determine how much of their performance is from real banking rather than more fancy financial engineering.

Confine your choice to dividend payers; even though they're at risk from a continued deterioration of the euro, at 4% on average, they're higher than the average 2.5% yield on their American brethren and higher than the global average of 3% at the moment.

I'm working on an article about this right now – my top three overseas dividend choices for yield-starved investors – and will be publishing it in Money Morning shortly.

B: Any final thoughts?

K: There's no doubt that Europe is an inherently risky proposition at the moment. But, sitting out of the markets entirely is even riskier.

For all its faults, Europe is not going to explode. Slow down? Struggle? Flail about? Yes…all three.

The key is finding investments that will allow you to remain a stock market bull even as the economic bears come out to play.

Right or wrong, central bankers want the party to continue.