In the midst of a brewing currency war, Japan's out-of-control monetary policy has caused the yen to fall to an almost five-year low against the U.S. dollar.

With an economy one-third the size of that of the United States, Japan has committed itself to a fiscal program that's almost double the U.S. Federal Reserve's current $85- billion a month stimulus.

Like any other war, this battle of monetary-easing measures won't end well, but fortunately for Americans, it's looking more and more likely that the dollar will emerge victorious.

"Right now, the U.S. dollar is the 'cleanest dirty shirt in the laundry,' so I'd buy it," said Money Morning Capital Waves Strategist Shah Gilani.

Many experts are now predicting the dollar's climb has just begun and some analysts see the dollar hitting 105 yen this summer and possibly 110 by the end of the year.

"The turn in yen has been dramatic and has proven the importance of momentum when a multi-year cycle turns," Nomura currency expert Jens Nordvig wrote in a note to clients. "A similar dynamic could be in store for the dollar. In the scheme of things, the USD REER [Real Effective Exchange Rates] is still trading close to multi-decade lows. Once the turn is evident, we believe momentum could be powerful."

Here's why the U.S. dollar's run is just beginning.

Why You Need to Invest in the U.S. Dollar

In addition to Japan's spending spree, the dollar will likely gain strength because of uncertainties surrounding the euro, the fact that newfound domestic energy supplies should boost the U.S. economy, and an improving U.S. trade deficit.

"We've had back-to-back good news in U.S. figures and you have to wind the clock back six to eight weeks to find the last time we had that," Nick Parsons, head of market strategy at National Australia Bank, told Reuters. "Once we got through 100 (yen) and the Japanese bond buying data came out, that added fuel to the fire."

While the stock markets are at all-time highs, the trade-weighted U.S. dollar index, which measures the value of the dollar against a broad range of currencies, is in a near 20-year bear market. 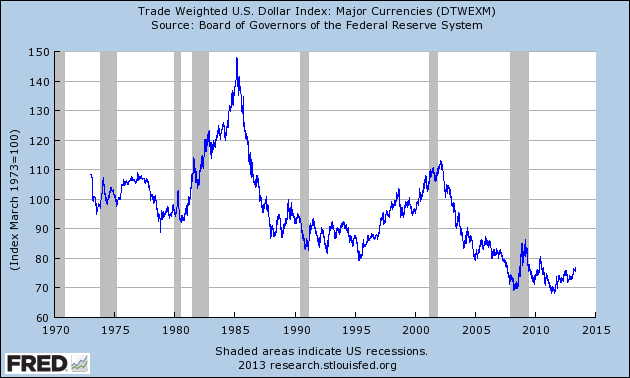 Yet the dollar index has increased 5.3% since February, which could be the start of a long-term reversal.

"As other countries work to knock down their currencies, it's important to point out the U.S. has already done that," Gilani notes. "Uncle Sam was the first to engage in that policy, but on a very hush, hush 'we're not doing that' basis. But QE and keeping interest rates low here is how that's been accomplished, and our exports have been robust as a result."

One way to play a rising U.S. dollar is with the PowerShares DB US Dollar Index Bullish (NYSE: UUP). It goes up as the dollar gets stronger and currently trades at $22.62.

For other ways to invest in the greenback, check out the Forex market. There, you can make all sorts of trades on the dollar, and other currencies as well.

Further Reading:For more on how to profit from a stronger dollar, read How to Make a Fortune If the Currency Wars Go Atomic

For the Dollar bull run to continue, the US had better get their commercial deficit, their balance of payments deficit under control, not to speak of a responsible fiscal policy. Today's TICS have confirmed a substantial regression in overall foreign investment. Just wait for a bond offering to fail, interest rates to run away and the King Dollar might be out there naked.
Meanwhile, an upturn looks quite sensible, forex has never been a one way street, but the historical trend since 1971 has been south, not north. Do not forget that the US begged the whole world to lower the Dollars value in 1985, since its then extraordinary rise started to hamper the US economy.

Werner, sure, the balance of payments in the USA are getting real bad, but nowhere near as bad as Japan and Europe. What's more, the dollar is the worlds reserve currency, so it has to be strong, or else no one would want it. Owning the worlds "key" currency has its benefits, but it has its responsibilities also. And this brings us to the debacle of free trade, which is not free or fair in any sense of the words. As an advanced economy, the USA cannot compete against countries like China that has an average wage of 80 cents an hour. The so called solution is to devalue the dollar to help exporters compete against other advanced economies, so we can sell what we can to China, India, etc. The problem with that is, everyone else gets penalized by a devalued dollar in the process. But yea, if the market starts demanding higher rates, the USA is screwed. Stock market slide, bond market meltdown, and the FED will be out of options. I guess optimism is our only hope, but keep a stock pile of ca$h in the vault just in case.

You are right when you say that we still not to go against the dollar despite it splurging value in recent years, I may not fully understand the implications but we have to admit that USD is still one of the most competitive in terms of FOREX trading, and most moneatary value worldwide depends on the rise and fall of its value. Same thing was written in an article in http://ouroptionfairreview.com binary options broker review and it clearly states that "There has been a significant shift in global currency market dynamics over the course of the past week, driven not only by the JPY, but increasingly by the USD. We have discussed recently the potential change in the status of USD, with the US increasingly being seen as an investment destination and the USD being used less as a funding currency."