A strong stomach and a tremendous amount of patience are required if your invested in gold stocks these days, as miners have been exhibiting their typical volatility pattern.

That's why I often say to anticipate before you participate, because gold stocks are historically twice as volatile as U.S. stocks. As of March 31, 2013, using 10-year data, the NYSE Arca Gold BUGS Index (HUI) had a rolling one-year standard deviation of nearly 35 percent. The S&P 500's was just under 15 percent.

I believe the drivers for the yellow metal remain intact, so for investors who can tolerate the ups and downs, gold stocks are a compelling buy. Here are three reasons:

According to research from RBC Capital Markets, Tier I and Tier II producers are inexpensive on historical measures. Based on a price-to-earnings basis, RBC finds that "shares are currently trading not far from the recent trough valuations observed during the 2008 global financial crisis."

And on a price-to-cash-flow basis, gold stocks are trading at bargain basement prices. The chart below shows that average annual cash flow multiples for North American Tier I gold companies have fallen to lows we haven't seen in years. Since January 2000, forward price-to-cash-flow multiples have climbed as high as 26 times. This year, we see multiples at the high end that are less than half of that. 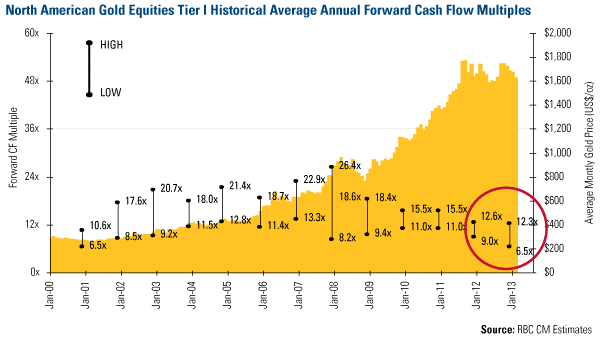 Tier I and Tier II companies "offer investors an attractive entry point from an absolute valuation perspective with respect to the broader market," says RBC.

2. Gold companies are increasing their dividends.

With the Federal Reserve suppressing interest rates, investors have had to adapt and reallocate investments to generate more income.

That's where gold companies come in. I have discussed how miners have become much more sensitive toward the needs of their investors as they compete directly with bullion-backed ETFs and bar and coin buying programs.

In response to shareholders' desire to get paid while they wait for capital appreciation, gold companies have rolled out dividend programs and increased payouts. "The growth in dividend payout has been spectacular when looking at the industry as a whole," says my friend Barry Cooper from CIBC World Markets.

His data shows that over the past 15 years, the world's top 20 gold companies have increased their dividends at a compound annual growth rate of 16 percent. By comparison, gold only rose 12 percent annually. 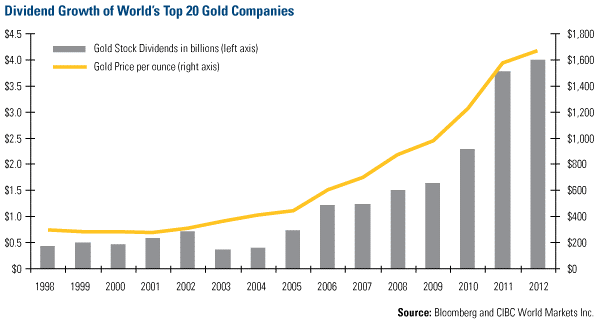 Not only are gold companies increasing their payouts, the yields offer a tremendous income value to investors compared to government bonds today. Whereas investors receive a 1.5 percent yield on a 10-year Treasury, the stocks in the Philadelphia Stock Exchange Gold and Silver Index (XAU) are paying a full percentage point more!

This is a significant change from the past: In April 2008, the Treasury yield was nearly 3 percent more than the dividend yield of the XAU.

In addition, the yields of gold stocks have been climbing over the past year while the 10-year Treasury remains low. 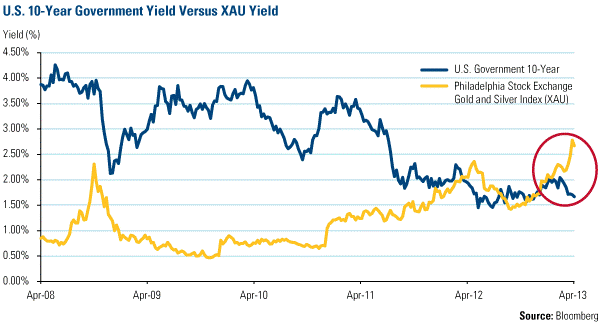 3. Enhanced returns in a diversified portfolio.

We have long advocated a conservative weighting of 5 to 10 percent in gold and gold stocks because of the inherent volatility you are seeing today. But despite the extreme moves, there's a way to use gold stocks to enhance your portfolio's returns without adding risk.

What happens when you add in gold stocks? Assuming an investor rebalanced annually, our research found that a portfolio holding an 85 percent of the S&P 500 and 15 percent in gold stocks increased the return with no additional risk. This portfolio averaged 10.96 percent over that same period, or an additional 0.62 percent per year, over holding the S&P 500 alone. Yet the average annual volatility was the same. 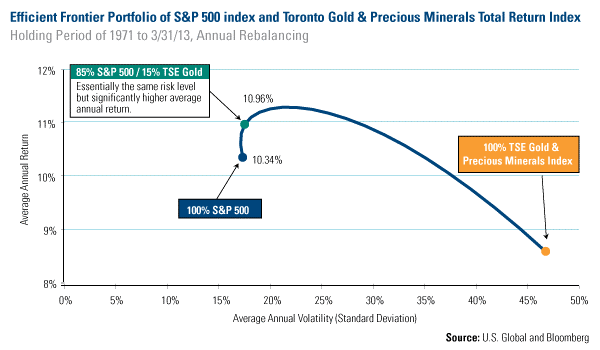 Although 0.62 percent doesn't seem like much, it adds up over time. Assuming the same average annual returns since 1971 and annual rebalancing every year, a hypothetical $100 investment in an S&P 500 portfolio with a 15 percent allocation in gold stocks would be worth about $7,899. This is greater than the $6,246 for the portfolio solely invested in the S&P 500 while adding virtually zero risk.

Not all miners are worthy of your investment, and the task of picking quality gold company candidates isn't simple. One company we currently like is Alamos Gold, which reported first-quarter 2013 results last week.

To the delight of many mining analysts, the company beat analysts' expectations on both the top and bottom line. Alamos grew its production to 55,000 ounces of gold from 40,500 ounces in the same quarter last year.

In addition, AGI boasts an 8.76 percent free cash flow yield, allowing executives to build the business through paying off debt, making acquisitions or returning money to shareholders. In Alamos' case, the company announced a stock repurchase of 10 percent of its float over the next 12 months.

While the company trades at a premium to most junior producers, it may be well worth the extra coin, as its low cost profile, cash generation and self-funding capabilities, as well as its discipline in returning capital to shareholders fit our growth at a reasonable price (GARP) model.