There's a lot of buzz that President Obama's current scandals - Benghazi, the IRS and the Department of Justice - may bring down the financial markets.

I disagree - if anything, they'll provide fuel for another leg up.

The Benghazi scandal is pretty straightforward. Somebody screwed up badly and people got killed by what increasingly looks like a coordinated terrorist attack. Much to the Republicans' frustration, fallout has so far been largely limited to the president and former Secretary of State Hillary Clinton.

The IRS scandal is a little more convoluted, though hardly surprising - at least to me any way. The agency recently acknowledged that it targeted conservative groups for aggressive tax compliance enforcement. Acting Director Steven T. Miller has resigned after being thrown to the wolves by a White House eager to distance itself as quickly as possible from the situation.

And finally, there's what some are calling "AP-gate" in which the Department of Justice was found to have gone after Associated Press journalists' phone records as part of a counter-terrorism investigation.

Never mind that I think reporters ought to be held accountable for national security leaks, what's apparent here is that the investigation potentially compromises press freedom without the express legal authority needed to do so. So much for the White House's assertion that it's the most transparent administration in history; targeting reporters and whistleblowers isn't the way to go.

Tempests in a Teapot

As repugnant as these incidents are, all three have limited economic impact and despite a bunch of muckraking, the public's outrage isn't there. Besides, we've seen worse...and the markets not only survived, but prospered.

Remember Iran-Contra during Reagan's presidency? Or the Lewinsky affair during President Clinton's tenure? Been there, done that.

Republicans spent a year bickering about and impeaching President Clinton. Yet investors enjoyed the "Great Moderation" - that's what economic historians call the period of low inflation, steady growth and investor friendly markets that rose more than 200% from December 1994 to July 1999.

Obviously the two time periods overlap in terms of market performance, but so what.

Despite widespread belief to the contrary, no single president is ever responsible for market performance. It's Congress that needs to be held accountable.

Generally speaking, the financial markets move in 17-21 year cycles. A president has at most eight years in power. The 535 members of Congress, on the other hand, have an average tenure that's rising with each successive Congress.

What's really interesting is that the notion of "citizen" legislators has fallen by the wayside. Members no longer serve Congress and go home after relatively short terms as they did for the 18th and early 19th centuries.

Instead, they stay, exercising significant seniority influence and concentration on key budgeting, finance and investment committees and subcommittees. You can see that very clearly in the distribution of service tenure data (below), which highlights the transition from the 16th Congress (1819-1821) to the current 113th Congress, which runs from 2013-2015. 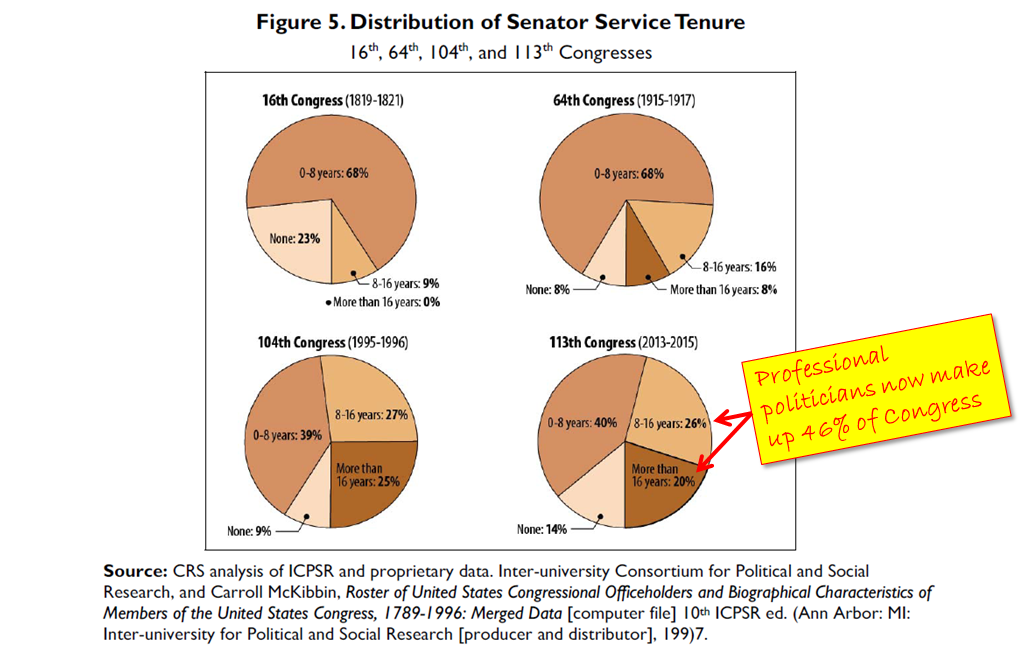 It's more important to focus on what Congress does than who's in the White House because crony capitalism and insider dealing continues to grow dramatically with each new set of legislators.

As the old saying goes, "absolute power corrupts absolutely." But that's a subject for another time.

Let's talk about how this affects our money.

Scandals and Your Money

Most people are surprised to learn that the markets have returned an average of 15.1% a year since WW II when there is a unified White House and Congress - meaning both houses are controlled by either Republicans or Democrats - and only 3.1% a year when the president and Congress are from opposite parties.

In other words, as bad as the concentration of power is in terms of political hijinks and the potential for malfeasance, the markets tend to outperform when there's a lopsided White House and Congress.

Factor in a few trillion dollars of stimulus from an obviously politicized Fed for good measure, and I think 15.1% a year may actually prove to be conservative when President Obama's administration rolls into the history books (and no, just for the record, I can't believe I'm saying this either) for three reasons:

Weak numbers on any front are viewed as a sign that the Fed will remain accommodative as will other central banks around the world. The old adage "don't fight the fed" has really become "don't fight the feds" - as in plural. Trillions of dollars on the sidelines have to be put to work and are hungry for yield, especially from stocks. A recent Bloomberg Poll revealed that 54% of respondents favor equities - no surprise there.

The trillions of dollars worth of stimulus Uncle Ben has put into play the past few years have socialized risk. The game used to be private gains and private losses. Now it's private gains and socialized losses. Businesses that have under-invested for years are beginning to capitalize on a distracted Washington using the breathing room to make new investments.

People are more predisposed to breathe a sigh of relief when negotiations take place and even small compromises are reached. This, in turn, causes a fresh flood of money into the markets with each collective gasp.

I realize that this may be hard to stomach depending on your political perspective.

So let me offer one additional data point for your consideration - the equity risk premium.

It's a quantitative expression of the economic underpinnings between forward-looking estimates and current prices. It's used in just about every financial model around the world and is a critical component when it comes to corporate and government finance.

What you need to know is that the equity risk premium reading is reaching historic highs at the moment. As my friend and CEO of Fusion IQ, Barry Ritholtz noted, that's very bullish, especially when you consider that the current reading corresponds to peaks seen in November 1974 and January 2009...both of which preceded other impressively bullish periods in history.

Here's a chart released by Fernando Duarte and Carlo Rosa of the NY Fed earlier this month that puts this into perspective. 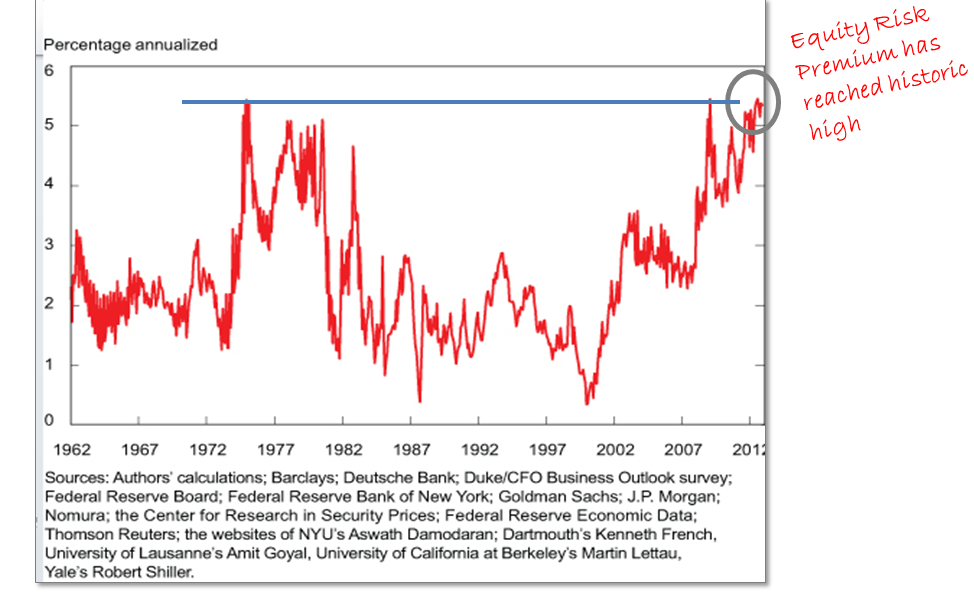 To be clear, I still have tremendous misgivings about the underpinnings propping up the house of cards that Washington and all the other central banks have created. You may, too.

I think all of this nonsense is going to end badly.

But try to put that aside if you can.

Personal opinions do not shape markets - profits and earnings do.

So make sure you grab your share even if Washington can't grab its backside with both hands.

On Wednesday, I'll be back to reveal three great total-return stocks that are extremely well-positioned to navigate these treacherous waters and not only deliver some healthy, rock-solid yields but offer impressive growth potential.

In the meantime, keep your fingers crossed for more Washington slapstick.

I'm the 10% stop club upon buying, because as i am maxed in my Roth I take less chances, but on
occasion will let a loss run a little further in my cash account but no tax benefits in a Roth LOSS.A $10 trade can save $100 as it did with the surprise GS sell Rec. on AMD
I always check your "Recs" with Schwab Market Edge Rtgs, so if not rated by Schwab I only watch.
Love your News and ideas, but wish they came at night even Mdt., 'cause your morning News
often keeps me out of the MARKET SIGN ON, because I sing with the owls keeping me from soaring with the Eagles!……Love your concise readings and quick Recs.