[Editor's Note: We are constantly surveying the investment world for ideas, hidden stories and unique perspectives to share with you. One of our favorite spots to look is The Aden Forecast, which has been written by Mary Anne and Pam Aden for decades. This recent article they crafted for you is testament to why we value their insight and analysis.]

For the past six months or so, we've talked a lot about the velocity of money and its effects. Increasingly, it's become the most important factor in understanding the markets and the uncharted waters we're currently navigating.

For years we've been delicately sailing between the Scylla and Charybdis of our day, between inflation and deflation. And the sharp drop in gold was yet another slide towards deflation's shores.

Meanwhile, the world's central bankers have been at the helm, doing all they can to keep deflationary pressures at bay and steer hard toward inflation.

But despite their unprecedented global efforts, including massive money stimulus and near zero interest rates, the rocky shores of deflation loom larger and larger. Here's why...

During the outset of the 2007-08 financial crisis, the world was brought to its knees. Don't forget, this was the biggest crisis and recession since the Great Depression, and for a while the global financial system was literally hovering on the verge of disaster.

The banks had lent money to everyone, and these bad loans and reckless policies resulted in the collapse of the subprime mortgage market. In an environment of extreme tension, some of the biggest lenders like Lehman Brothers went under, but others were saved to keep things from getting worse.

After that, the banks were scared, they had to regroup and get their houses in order. They obviously didn't lend money.  Instead they became extremely conservative. Even worthy borrowers were not granted loans.

This played a big part in the overall economy. It didn't rebound and grow normally following the recession.

So the Fed had to pick up the slack with their super easy monetary policies to get the economy back on track. They didn't want to repeat the mistakes made during the Great Depression and, in the process, they've tripled the money in circulation since 2008.

The Fed succeeded, sort of. The banks still weren't lending so the result has been a lackluster recovery and high unemployment for the past few years. Why?... This brings us back to the velocity of money (see Chart 1). 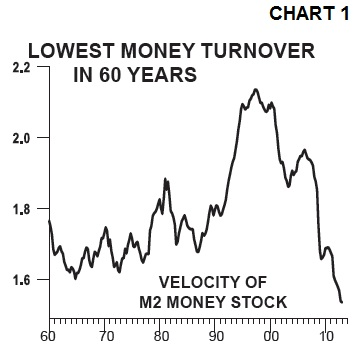 As you can see, the velocity has declined rapidly in recent years and it's now at a 60-year low. This is a huge deal and we're increasingly convinced this is the main factor tipping the scales toward deflation.

Declining velocity means the Fed can produce all the money it wants, but this money isn't turning over. In other words, since the banks aren't lending, the money is just sitting and the Fed has no control over it.

Under normal circumstances, banks lend money to businesses for expansion and growth. Consumers borrow, and previously it was part of doing business for the banks to lend out about eight times the amount of money they had on hand.

This, in turn, is a stagnant environment for inflation and that's why it hasn't surfaced like it normally would. That is, market forces have overpowered the Fed and the other central banks.

But there is some good news. According to the latest Fed Senior Loan Officer survey, banks are starting to lend, especially to businesses and commercial real estate.

This is a big deal considering they've been paralyzed for the past five years. And even though only 19% of the banks indicated they're easing up on lending, it's a start. If other banks now follow suit, then eventually we could see deflationary pressures ease up.

If so, that would certainly be the better option, but we'll see what happens. Keep in mind, the debt load is massive and the automatic spending cuts are not even causing a dent (see Chart 2). 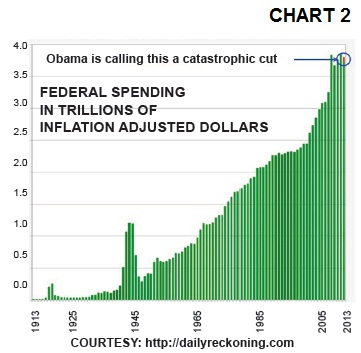 Also important to consider are demographics.  The world population is aging and that means they're not borrowing and buying as much as they did before.

This, together with the debt load, could keep the economy sluggish and the scales tilted toward deflation.

On the other hand, we also know that interest rates are going to stay low for a couple more years. This should help boost borrowing and the velocity, as well as easing deflationary pressures.

If that happens, then we could indeed see inflation shoot up at some point in the future. The potential is clearly there and all it needs is a spark, like a shift in sentiment, to ignite inflation.

In fact, many feel that the longer deflation drags on, the longer the Fed will keep producing money and this makes sense.

We know deflation is the Fed's #1 enemy, so it's going to fight it tooth and nail. And the longer it does, the greater the future potential for surging inflation and gold.

---
Mary Anne & Pamela Aden are well known analysts and editors of The Aden Forecast, a market newsletter named 2010 Letter of the Year by MarketWatch, which provides specific forecasts and recommendations on gold, stocks, interest rates and the other major markets. For more information, go to www.adenforecast.com

What does Huthchinson and team think on PGX still in the game curious to your thoughts, also the shipping does the summer look good for ships with dry goods,
Believe it or not I kind of judge the market by the PGX pick seems in line, thoughts

attributing the least economically healthy motive, lack of full knowledge, or even well intentioned bumbling to the gang of socioeconomic. psychopaths & pathological liars that we call the federal reserve is equivalent to the deepest idiocy of taking a bloodthirsty predator as a friend. the m2, money velocity, the money multiplyer, is none other than the fractional reserve fraud in action. the great depression was a lesson to all that the fed was in total conscious, control. the recent great inflationary recession is another crack of the plutocratic fed whip. wake up.

Nonsense.
The economy does not run on Money. It runs on Oil. And the difference between the floor price of oil(Below which it is too expensive to extract from the ground) and the ceiling (Where it is too expensive for the consumer) gets smaller and smaller.
In other words as the price of extraction increases the floor rises up to the ceiling.
And when they meet, the show is over. FIN. The End.
But there is hope.

Your homework is to ensure that your knowledge of physics does not trip you up.
Just remember. The Map is Not the Terrain.

Just suppose for a moment that instead of all this mastermind driven meddling we did the unthinkable and let the "too big to fails", aka, the Banksters, do just that. The solvent, "not to big to fail" would be picking over the bones of the dinosaurs, stuffing their balance sheets with the valuable assets once mismanaged by the Banksters and be able to loan much sooner and competatively then the government backed Banksters. Same goes for GM, valuable divisions like Allison and Corvette would be snapped up in a minute, archaic union cripppled divisions would be left in the dustbin of history.

How about once in a lifetime trying the dynamics and virtues of a truly free market instead of enslaving the US taxpayers for the benefit of a few, incompetent elites.

What a long article with wrong title. If you name your article "One Sure Winner as We Fight Deflation", then you probably need to spend a LITTLE bit more words than 1 last sentence, answering the title!

Exactly what I was thinking. A little background is fine, but I had to reread to find the one thing mentioned in the title and am not sure I did.

Please… Someone explain to me how we can have all this low inflation/deflation when gas, food, clothes, tuition, and just about everything else is going up?
Or does it just apply to wages which are going down? at least in the real world!
Notice I said wages NOT salaries! Salaries for entertainment, sports, CEOs , etc… are up while working wages are stagnant at best. People want to hire me for less than I made 10-15 years ago.

When prices and wages rise in tandem the inflation is actually neutral in its effect rather than real.
Either way inflation hurts savers and fixed income dependents.

I read this article 3 times and I still don't see what the "one sure winner "is.

So the "Sure Winner" is inflation and gold in the long term? That's helpful, but so obvious the squirrels in my back yard know it already–look, they're already storing acorns. No more Aden Sisters, please.

Money is to our economic organism as blood is to the flesh organism.
The +/- 30 trillion hidden offshore by the ultra rich and the fact that the corporations who are gorged with money and are not spending, has been tantamount to our economy's jugglar being lanced. The money is not in circulation. The organism (economy) is and will continue to be anemic as long as our tax system disincentivises repatriation and we don't force the banks to lend the free money. These two items, if addressed should then create an environment which the corporations should feel better about spending into.
Inflation will not be an issue as long as the blood continues to be drained.

If you look at the money velocity chart you can see that when the Baby-Boomers reached their early fifties the velocity started to drop. They were starting to pay down their debts and got rid of their credit cards. Being a Baby-Boomer myself I was about 53 at that time and I was certainly reducing debt, readying myself for retirement.
The Boomers will be retiring over the next 20 years so this scenario will play out for at least that long and probably longer. Western governments should have seen this coming but kept kicking the can down the road. Now, at 65 yrs old I probably won't see the end of this in my lifetime!

Let me get this straight.

You said the Fed has been fighting deflation and losing. "the money is just sitting and the Fed has no control over it."

Then, your grand idea is that gold will go up because….wait for it…the Fed will suddenly win? This "analysis" make me laugh. Is this article supposed to be serious or a very late April Fools joke?

Deflation is VERY bad for gold (and all commodity prices). The trend is deflation, hence, the Feds battling it with money printing and negative real interest rates. Invest accordingly.