This is the third-largest economy on the planet in the fastest-growing region in the world.

Ostensibly, a drop in Chinese PMI that fueled global slowdown fears was what the talking heads agreed was the reason.

In reality, there were three other real factors.

And every investor needs to know what actually happened:

As was the case with gold a few weeks back, this bond event pushed "value at risk" metrics or VaR beyond normal limits.

Typically Japanese traders could have simply purchased offsetting hedges like options or other derivatives, but their greed glands have been in consumption mode for so long that there was no additional cash to do so. They were, for lack of a better term, fully invested and fully margined.

Remember a while back when I told you that traders would sell equities if they had to bring VaR models in line? This is exactly what happened.

Having already sold substantial portions of their gold a little over a month ago, Japanese traders began selling equities as hard and fast as they could to compensate for six sigma volatility in Japanese government bonds. Again.

And, for the second time in weeks, traders effectively walked away from the bid -- nobody wanted to buy. So prices that had begun to slide accelerated to end the day down a staggering 1,143.28 points, or 7.32%, as America slept.

Bernanke made comments via written testimony to Congress May 22 from the Fed's April 30 - May 1 meeting suggesting that the end of stimulus may not be far away.

What's interesting to me about this is that very few people here in the United States lasered in on the meat of his recent observations - namely that when the Bank of Japan is finished with its stimulus, the BOJ's balance sheet will be three times larger than the Fed's balance sheet compared to GDP.

But Japanese traders sure did. I know, because I received several calls from panicked Japanese bond trading colleagues in the middle of the night wanting to know if they had interpreted Bernanke's comments correctly from English to Japanese.

In practical terms, what the Bank of Japan is planning to do is like expanding the Fed's ledgers to $12 trillion - expensive, fraught with risk and almost completely un-repayable except by default.

So they began taking profits in addition to burning off the risk premium needed to bring VaR in line. That all but guaranteed that momentum was firmly to the downside all day in Tokyo. 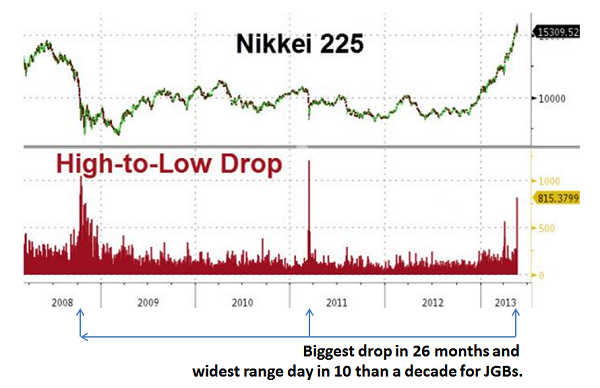 3) The Bank of Japan lost control over normally placid Japanese markets for the day.

The way I see it, this drop was Japan's "Lehman Brothers" moment.

It's the first time traders have really felt panic in a while and a sign that all is not well in any central bank-manipulated market, but especially in the big three markets of the United States, the EU, and Japan.

All it will take to induce a watershed moment is traders taking matters into their own hands. Absent additional liquidity, whatever central bank they target will lose control and the markets will adjust on their own, as completely as they need to.

What that actually looks like and when that happens, we don't know. Nobody does. But the bet is this is more of a "when" question than an "if" question. The same derivatives traders that locked the PIIGS (Portugal,

Italy, Ireland, Greece and Spain) out of the barnyard in Europe have now set their sights on Japan. And Prime Minister Abe's unlimited stimulus is simply more slop in the trough as far they're concerned.

Japanese financial companies at the center of this tempest fell off the proverbial cliff. Consumer lenders were particularly hard hit as were major industrials. Shinsei Bank (8303), Mitsubishi Motor Corp (7211) and Tokyu Land Corp (8815) were among the biggest losers.

While they are still tallying the wreckage as I write this, some sources are suggesting that last Thursday's fire sale may have just buzz cut 1.5%-2% of Tier 1 capital from the Japanese banking system. That's bad.

Tier 1 capital, in case you are not familiar with the term, is what the bankers call "core equity capital," meaning it's the money that a bank has on hand to support all the risks it takes, including lending and trading.

The point: The banks Japan needs for its recovery just got weaker.

Now for the trillion-Yen question...what does this mean for your money?

At the end of the day, somebody is going to make a bundle on the volatility ahead...it might as well be you.

Excellent comparison of how striking the simularities are between Japan's 2013 crises and our own in 2007 involving, Lehmann Brothers Bank, General Motors Corp and the Housing Bubble colapse brought about by the sub-prime mortgages being repackaged and sold as investments. Great job, thank you.

The concept of a market with NO bids seems to escape most. They think they can set stops and imagine that they…if not everyone else…will be able to exit puffed up positions (courtesy of central banks' insane money conjuring) in an orderly fashion.

That wasn't gonna happen before the bots took over. And now "bidless" and gapping into the abyss is just a nanosecond away at any given moment. In the old days, at least orders came in only as fast as tickets could be written and online orders entered. Now, thanks to the bots, it's instantaneous.

Here's the way we used to frame the issue back when you dealt with actual people when placing orders and there were still lots of specialists on the floor responsible for stepping into the breech to provide bids in a panicked market.

Now, it's "SELL!" … and silence. Just a vertical line on a chart and idiot chatter coming from the Fed's weasels at CNBC.

As with all things in life anything not built on solid ground (fundamentals) eventually comes crashing down. Whether it is Europe , the US or Japan or any other country, "growth" based on excessive central bank debt and unsustainable personal debt levels will not and can not glue a house of derivative cards together.

Wall Street started the trend to shift debt risk from consumers to derivatives so that consumers can make more debt. In the end it boomeranged on the very institutions that created those products but governments then stepped in and assumed or backstopped those risks.

It seems to me that governments and central bankers sees stimulus as a necessity to stay on the good side of the political goodwill of consumers and therefore they assume the risk of loading up on stimulus debt to keep economies going. Ultimately it will not only lead to financial failure but also political system failure because governments will have to find an outlet (read write off) for all the debt on their books. Ask the Greeks how.

When this will happen nobody knows but it seems to me anybody with a wicked sense of humor need to follow a two pronged strategy. On the one hand you have your secret treasure chest under your bed which you fill up with valuables like gold, diamonds and silver and on the other hand you live a public live of maximum debt. As long as you are allowed to make debt you borrow to buy goodies to fill up your secret chest and you spin money through your accounts at breakneck speed to create the illusion of wealth. And you do this for as long as you can load up on debt all the while putting real valuables in your secret treasure chest.

When the bad debt hit the fan you go bankrupt in a large cloud of dust, leaving all your creditors wondering what happened and you slip out the backdoor of your mansion with your secret chest fully stocked and you put up shop somewhere else living by slowly selling your real valuables.