In a recent conversation about resources I had with Rick Rule, founder of Sprott Global Resource Investments, our talk kept coming back to water.

Let's just say, Rick likes water. Or rather, the prospects for water investments.

Rick's offices are in California, so he knows only too well the supply problems plaguing southwestern U.S. states.

To put things bluntly, water is necessary, in short supply, and getting more expensive.

Few people think of water as a limited resource, much less as an investment prospect.

Sure, it covers two-thirds of planet E arth, but 97% is salt water. That makes it unfit for human consumption without a lot of expensive processing. It's also of no use for livestock consumption, nor for growing crops or industrial uses.

Just 3% is fresh water, and two-thirds of that is frozen in glaciers and in the polar icecaps. Which doesn't leave a whole lot to share.

What's more, according to the U.N., in the past hundred years, humans have increased water use at more than double the rate of population growth.

Americans use a lot of water, to the tune of 100 - 150 gallons per person daily, on average. On the other side of the planet, in places like China and India, water use is closer to 20 gallons per day. But with nearly a third of the world population living in these two countries alone, their "water footprint" is still massive.

What's more, as numerous developing nations improve their incomes and graduate to the ranks of the middle class, their water consumption just keeps accelerating. 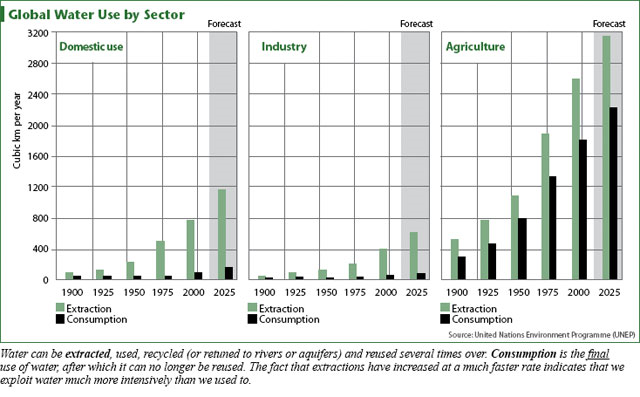 Twenty-seven million people in seven states depend on the Colorado River as their main source of water. The Colorado irrigates over 3 million acres of farmland. In Southern California alone, some 18 million residents look to this one river for 40% of their water needs.

But in the past decade, the Colorado has suffered a severe drought, draining it to a mere 59% of its reservoir capacity.

So needless to say, the fundamentals for solid water-related companies are very bullish, and that has Rick excited about the best of the best. But the angle he likes is not water processing, or water distribution, but rather water rights.

But the water angle here is that Boswell is second-largest holder of private water rights in California. Apparently, there is an aquifer under the lakebed where Boswell grows its crops that could supply up to 3 million residents, and some say the water rights by themselves are worth several billion dollars.

According to Rick, Boswell trades only "by appointment." Volume is so thin, the average is only about 340 shares per day, and even then only on the OTC (over the counter) market. Shares trade for a hefty $860 apiece, and yield about 2% in dividends. In the last four years, the share price has doubled. But given how precious its assets are, it's likely a good buy on near-term weakness.

LMNR holds the rights to local groundwater and surface water where, for the most part, development costs have already been paid. When land is developed in the western U.S., it needs to be demonstrated that there's at least 20 years of reliable water supply.

The water resource and water storage operations segment acquires and develops water resources for end-users, which includes utilities, developers and industrial users. Water storage purchases and recharges water for resale in the southwestern U.S. These operations are mainly conducted through its subsidiary, Vidler Water Company.

Remember, water is not only a precious commodity, but one that's also a basic necessity to individuals, farming, and industry.

And these three water positions are attractive ways to play the favorable supply/demand dynamic of water and water rights, especially in the southwestern U.S.

As our population ages and gravitates to warmer climes, this is one sector that's likely to get a lot more attention in the not- too- distant future.

Hello… after being a resident of Calif for about 50+ yrs, I have been a witness to one of the largest owners of water rights in the inland areas of Calif: the Los Angeles Dept of Water and Power. they have water rights and holdings all the way to northern Calif far beyond the Los Angeles basin… check it out and, oh yes, and they have been in the same business for a long time too!
Seems funny… we complain about $3.00 plus gasoline, but think nothing of buying water at the store in a small plastic bottle for a dollar!

JG boswell holds less than 50000 acres of water rights per State Water Board of California. People need to do some DD.

reply to chuck
Reply to  Chuck

Chuck, water rights in california are complex. You are talking about something different than the article. The article states that Boswell is sitting atop a large underground lake, that they own. This could be true (I have no way of verifying.) If it is true, they have the right to do whatever they want with that water.

You are talking about that Boswell has a claim to 50000 foot-acres per year from California water. This is different. State water is allocated through a complex process based on a lot of history.