It's no secret America has been in the midst of a natural gas revolution.

The technological advancement of fracking is causing nothing less than a full on shale boom, opening up amazing new profit opportunities if you know how to invest in natural gas - which I'll get to later. 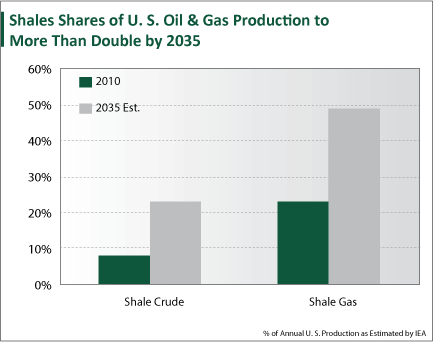 Thanks to the complexity and time involved, fracking a well is expensive, with costs running up to $10 million per well. It also requires a lot of room, a number of vehicles, and sophisticated and powerful equipment to get the job done.

But finding, drilling, and production costs are coming down as efficiencies are being gained. And this phenomenon will accelerate the rate at which supply hits the market.

Since late 2010, the time to drill a Bakken well has fallen dramatically - from 36 to 22 days currently.

Those plays that sport the heaviest oil mix are earning the most. But two of the most limiting factors in growing supply are pipeline and gas-processing capacities.

In some of the better known shales, such as the Marcellus, Utica, and Eagle Ford, as many as 1,800 wells are either dormant or under-producing. In most cases, either completion crews or a lack of infrastructure are preventing those producers from bringing the wells online.

What's more, production declines in many of the major basins should slow this year. Maturing wells tend to exhibit slowing patterns of decline.

The range of opportunities is wide.

How to Invest in Natural Gas

When it comes to transportation, billionaire energy investor T. Boone Pickens is big on natural gas. He thinks that, by the end of this decade, a majority of America's 18-wheel truck fleets will be powered by natural gas.

Some of the biggest fleets, like those of Wal-Mart and UPS, have already begun to make the switch. Others like Procter & Gamble and Nike say they plan to do the same.

Companies that produce equipment like engines that run on natural gas, or fueling stations that can accommodate the refueling of these fleets, are likely to perform well in the years ahead. And their markets are not exclusively in the U.S., but quite literally worldwide.

Another interesting angle with the American shale boom is the potential for liquefied natural gas (LNG). Natural gas costs a lot more in other parts of the world. Right now in the U.S., natural gas trades for about $4 per mcf (thousand cubic feet). But Japan pays more than $16 per mcf - a 400% premium - and Europeans pay about $10-11 per mcf.

Of course, there are costs involved in liquefying the gas and shipping it around the world...

I liked this. I liked this a lot. It makes perfect sense and I will be following LNG very closely. Thanks for this information.