An unexpected change of heart happened in May that you might not have heard about.

After years of resisting any path other than its rigorous course, Germany announced it is backing off from pure austerity and is now planning to spend billions of euros to stimulate the economies of Europe.

Germany, which had been the economic rock of Europe, was facing fissures in its economy as well as an upcoming election season.

Berlin's about-face seemed to be underreported, but the news is significant to global growth. Many countries around the world, especially emerging markets, have been trying to charge ahead, implementing stimulative easing and monetary policies to strengthen their economies, yet Europe was still a drag.

Just look at the unemployment rate in the Europe area, which recently rose to 12.2 percent, a new record, according to Business Insider.

Weeks ago, when a student discovered a mistake in the famous report of Harvard professors Carmen Reinhart and Ken Rogoff, I said that calling this data into question provides a platform for Germany and the European Union to lessen austerity measures and delay the inevitable. It appears that Schäuble and Merkel have taken their first step onto the stage of unprecedented monetary policies.

From March 2009 when the first round of quantitative easing began, central banks have cut interest rates a total of 515 times and injected $12 trillion into markets, says Bank of America Merrill Lynch (BoA-ML). As a result, U.S. stock investors saw the market take off an astounding 166 percent since the first shot of liquidity.

However, contrary to what you may think, the U.S. is not the best performing market in the world. Take a look at the chart below, which ranks the top 10 equity markets' total return over these past four years. Stocks in Indonesia grew 372 percent, Turkey rose 286 percent and Mexico has climbed 211 percent. Even Singapore, Korea and Australia climbed more than the U.S. stocks. 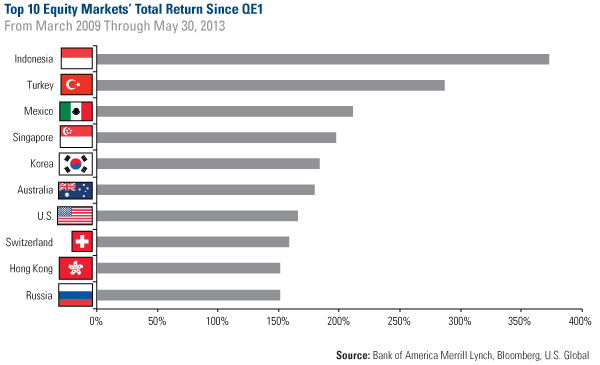 In addition to all the global liquidity sloshing around, central banks have also "crushed bond yields to the point that almost 50 percent of all global government bond market cap currently trades below 1 percent," according to BoA-ML.

In a great illustration of today's low yield environment, the research firm compared the yields across debt markets from 2007 and 2008 to today. In June 2007, Treasuries were yielding more than 4.5 percent; today, they are sitting just above 0.5 percent. Even the riskier high-yield corporate bonds, which climbed to a high of 23 percent in December 2008, have fallen to about 5 percent. 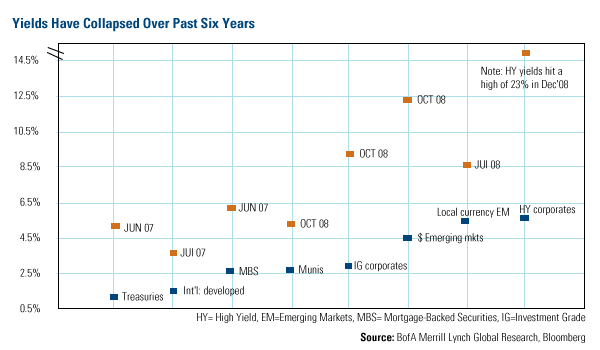 Even though market pundits talk about elevated rates on the horizon, we believe significantly higher rates that would move the needle for an income investor is a ways off. Low yields should be a significant factor for awhile.

For those who can handle a little more risk, take a closer look at the Global Emerging Markets Fund (GEMFX), which seeks undervalued, smaller and dividend-paying companies located in developing markets around the world.

On a year-to-date basis, the fund is outperforming its benchmark, the MSCI Emerging Markets Index by nearly 6 percent. See the fund's latest holdings.