Here are just a few of the headlines from the past week:

And our personal favorite:

Several Wall Street analysts reacted as if even being asked about the Hindenburg Omen offended them.

"Let's not mince words on this subject: This is an example of the worst kind of 'technical analysis' - a market signal essentially designated for media sound bites," Adam Grimes, chief investment officer at Waverly Advisors., told The Wall Street Journal. "The markets may well decline from this point, but they will not do so because of some cleverly named signal. The Hindenburg Omen, we have to say, is mostly hot air."

Nonbelievers in the Hindenburg Omen say it correctly predicts a stock market crash only 25% of the time, and point out the last time it appeared, in 2010, the markets just kept on rising.

"In 2010 the accuracy of the 'Hindenburg Omen' indicator went up in flames and the current situation suggests the same result in 2013," huffed Daryl Guppy on the CNBC Web site.

Yet an appearance by the Hindenburg Omen has preceded every stock market crash but one since 1985, and if you look closely at the numbers this indicator's track record is remarkably accurate.

Maybe the doubters don't know as much as they think they do.

"They call it bogus because they don't understand it," said Money Morning Chief Investment Strategist Keith Fitz-Gerald, who called the Hindenburg Omen one of his favorite indicators.

A Hindenburg Omen Raises the Chances of a Stock Market Crash

The Hindenburg Omen is a complex set of conditions that all must be met for an occurrence to be valid:

Once a Hindenburg Omen signal has been confirmed, the probability of a market downturn within the next several months of 5% or greater is 67.8%. Here's the likelihood of progressively more severe drops:

We've recently had three occurrences (more than two is considered a cluster) of the Hindenburg Omen within 36 days - April 15, May 31 and June 4. The Dow slipped 1.4% yesterday, so the predicted downturn may already be underway. 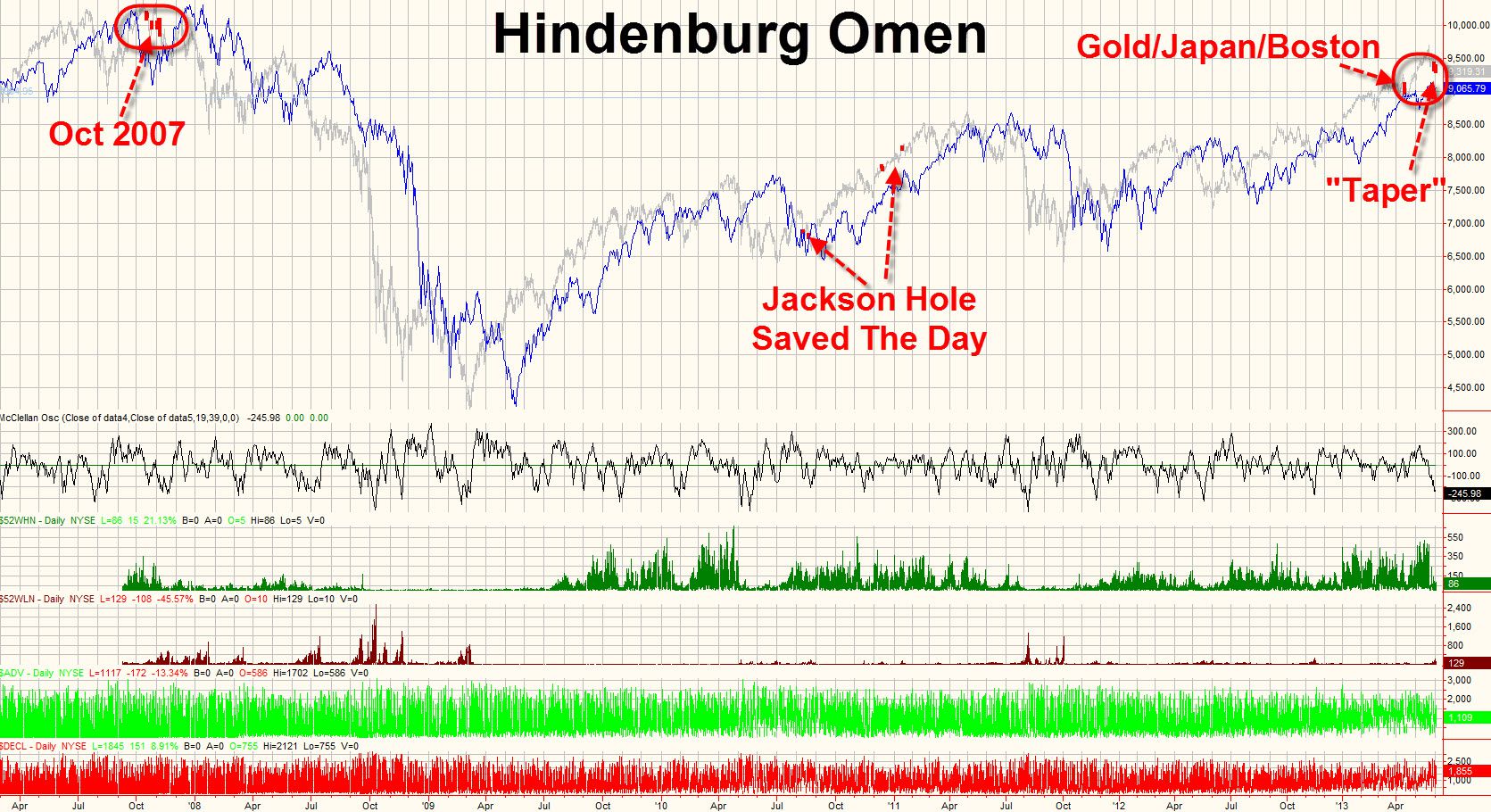 Why the Hindenburg Omen Works

What the Hindenburg Omen measures is market psychology, which Fitz-Gerald said is a primary force in driving the market.

"The mainstream guys are trapped in the ethos of quantifiable economics, so they dismiss it," Fitz-Gerald said. "They're busy assessing the technical merits of an industry fundamentally psychological in nature."

In fact, he said, the Hindenburg Omen has more in common with better-known socio-economic indicators like skirt lengths than the technical indicators that most Wall Street analysts study.

Socio-economic indicators correlate the relationship between human behavior and how the markets are performing, and Fitz-Gerald says they're usually far more accurate than the purely technical indicators most of Wall Street fixates on.

In the case of the Hindenburg Omen, Fitz-Gerald is so impressed with its predictive capabilities that he's developed his own version of it based on proprietary data.

"This stuff is not only real, but if you learn to understand it, it's profitable," Fitz-Gerald said.

Clearly, he's taking the latest occurrence of the Hindenburg Omen seriously, but advised investors not to panic at the possibility of a stock market crash.

"There's no need to run and yell and scream and put your head in the sand," Fitz-Gerald said. "But do be on your guard. Tighten up your trailing stops. Harvest profits. Invest with caution."