Oh, the law of unintended consequences and the opportunities it brings.

Thanks to the new standard of Keynesian Abenomics, the Nikkei has blasted 47% higher since November.  The Yen has lost about 25% against the U.S. dollar in the same time.

While we don't know what the future will hold for these trends, there's something else going on that will not fade quickly: The weak Yen has made imports to Japan a whole lot more expensive...including energy.

Since the Fukishima-Daiichi nuclear disasters in March 2011, Japan has compensated for its offline nuclear power plants by importing copious amounts of Liquefied Natural Gas (LNG).  It was the fastest way to keep electricity output stable in an economy reliant on non-domestic energy suppliers.

Energy now accounts for about one-third of all Japanese imports.  In March, those imports were valued at $17 billion Yen for the month.  The following month, that number hit $22 billion.

Not surprisingly, in April Japan set a new record for spending on LNG imports.  To be sure, a foundering Yen has contributed greatly.  But this nation built on exports needs to keep the lights on.  If all of Japan's nuclear plants were up and running at capacity, they'd supply 30% of the country's electricity needs.  Instead, they account for just 2%.

And Japan is not alone.

Now its neighbor South Korea, also an export powerhouse, is about to see its demand for LNG soar as well.

A scandal involving falsified certifications for parts has recently caused two of South Korea's nuclear reactors to be taken offline.  That brings the total now to 10 reactors out of 23 that are down, thanks to a combination of maintenance, malfunctions and this emerging certification scandal.  It could take as long as four months before the scandal-ridden reactors are restarted.

According to a recent report by Platts, "the lost nuclear power will need to be replaced with increased LNG imports and oil burn."

Already, South Korea is the world's No. 2 LNG importer after Japan.  Korea Gas Corp. has indicated it will be increasing stocks to 70% of capacity from its current level of 60%.

Such strong and growing demand for LNG begs the question: "Where will it all come from?"

The answer may be just beneath us.

Thanks to the technological innovation that is "fracking" shale gas, North America is dealing with a supply glut.  That has weighed on natural gas prices in this part of the world, keeping them at multi-year lows, currently trading at $4 per million cubic feet (Mcf).

Bloomberg recently reported that "North America will provide 40% of new supplies to 2018 through the development of light, tight, oil and oil sands, while the contribution from the Organization of Petroleum Exporting Countries (OPEC) will slip to 30%, according to the International Energy Agency."

It's no secret North America has been in the midst of a natural gas revolution. The technological advancement of fracking is causing nothing less than a full-on shale boom. 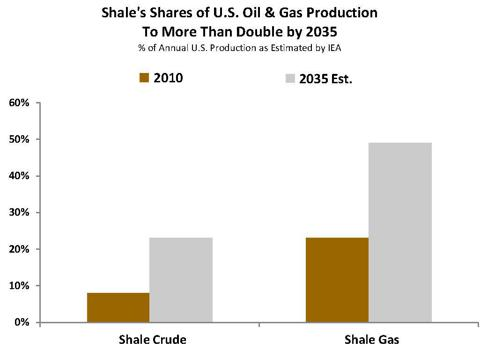 Exploration, drilling and production costs are coming down as efficiencies are gained.  And this phenomenon will accelerate the rate at which supply hits the market.

The U.S. Department of Energy (DOE) has recently issued a second permit to export LNG.  The first went to Cheniere Energy Inc. (NYSE:LNG) to build and operate the Sabine Pass terminal in Louisiana.  The most recent one was granted to Freeport LNG, whose terminal is on the Texas Gulf Coast.

Both of these projects are several years from their first exports, but many expect the DOE to award several more of these permits as U.S. gas production continues to grow.

Of course, there are costs involved in liquefying the gas and shipping it around the world.  But the price difference is so drastic, the arbitrage opportunity to convert and transport gas from where it's cheap and abundant to where it's expensive and limited has become overwhelming.

Once the gas is extracted, it needs to be moved.  If the ultimate consumer is across an ocean, the most efficient way to get it there is by sea.  But first it needs to get to port, then be liquefied, transported, and re-gasified at its destination.

Where exceptional potential exists is with those companies that design and build LNG import/export terminals, as well as the equipment to transport the gas or build the tanks to convert it to liquid and store it.  And the operators and owners of LNG ships, liquefaction, and re-gasification facilities also look like enticing investment opportunities.

Here are a few that may be worthy of further review.

…Gas at 4$ in the US vs 16$ in Asia… what an opportunity. I believe Peter that you are omitting the fact that to get this gas to Japan or Korea you have to spend Billions of dollar to liquefy it, transport it, regassify it and get it into a pipe thousands or miles away…

Why does it seem like the US Dollar has a place in this picture, China and our friend that we help from being a South Viet Nam has an agreement that does not get the attention it deserves, why is that? I could be wrong but South Korea likes the USA but somehow China and South Korea will only do business with the currency of Obama's best friend China (the yuan) is good between those two great neighbors ? but the USA Dollar can not be used in there transactions, please check on that I would like to know if that is true or false that those two Govt./Countries will not use the Dollar. Not commercially but the Govt. transactions is what I am told is no USA Dollars only the Yuan can be used for all Govt. purchases.

A very interesting read. Keep up the good work.

Alex M. makes a very good point. Natgas can also power cars and other light road vehicles.
Several years you say? Japan and S. Korea need the gas yesterday! They, politicians and the industry, need to get off their butts now!
There may not be so many years North America can export a lot of LNG, because there are huge deposits of natgas many places in the world, including China.
China is much closer to S. Korea than N. America is. The Chinese will gladly keep on burning cheap coal, exporting natgas, their people wearing gas masks.

You need more information on dry gas ( generally methane, deep, very expensive, and what the fabulous reserves are based on ) and wet gas ( mixed gases, shallow, limited, and very, very dirty ) . Forget the market and go on line to see the wall of dissent against the total destruction of living space after the frackers move in.