The amount of money big banks have spent on settlements, alone, in just the last four years will blow your mind – and these totals are about to get higher.

We all remember the recent housing market crash, and the associated bailout of some of America's biggest banks. Some of us consider the allocation of American taxpayer funds unjust, and believe the bail outs to be a ludicrous abuse of the big banks' power.

What Are Big Banks Using Bailout Money For?

What many Americans don't know is that Big Banks have been using residual bailout funds for defense from lawsuits.

The bailouts big banks received in 2008 will forever affect the way they do business & in turn will limit the trust they receive from American citizens – their customer base.

"The non-profit Better Markets filed a lawsuit against the U.S. Justice Department to block the government's $13-billion settlement with JPMorgan Chase (NYSE: JPM) over faulty mortgage products the bank sold before the financial crisis. Better Markets argues that the record settlement provides JPMorgan with "blanket civil immunity" for its illicit activity without a day in court. Its CEO Dennis Kelleher said, "taxpayers are being forced to accept a secretive backroom deal that may well have been another sweetheart deal" for JPMorgan Chase five years after its bailout."


Together the six biggest banks paid $85.75 billion in credit and mortgage-related settlement costs from fiscal 2010 through the end of third-quarter 2013. Here's how those payments breakdown by bank*: 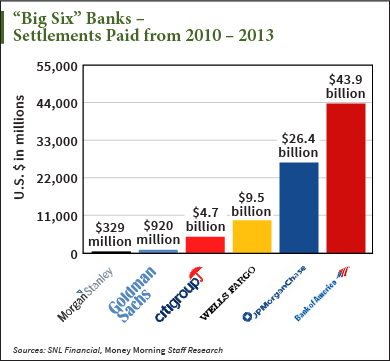 If you're interested in the full story behind this chart we recommend reading, CHART: The Ridiculous Amount of Money Big Banks Spend in Settlement Costs.

As distrust of big banks increases amongst the American population, we have to ask ourselves: Will Americans be willing to post bail for these big banks again? Join the conversation on Twitter on #BigBank misbehavior in 2014, and be sure to follow @MoneyMorning.

Expert Commentary:
The Staggering Numbers Your Bank Doesn't Want You to See
Many of us may have a small share of the country's largest banks in our wallet: a debit card, a credit card, or for the old-schoolers, a checkbook.
Editor's note: Last time Shah revealed who regulates the TBTF banks and how those various agencies' rules and regulations are administered to try to keep the banksters in line. Today Shah is going to shed light on the banks' abuses and just how much they've paid up for them.

CHART: The Ridiculous Amount of Money Big Banks Spend in Settlement Costs
The amount of money big banks have spent on settlements in just the last four years will blow your mind – and these totals are about to get higher.

Analysts had projected earnings per share (EPS) of $1.35 for JPMorgan.

Somehow, CEO Jamie Dimon pulled another rabbit out of his hat…