Updated June 24, 2016: The Dow Jones Industrial Average opened today with a 2.4% plunge. Investors worldwide are fretting over the unprecedented Brexit decision and how it could destabilize Europe’s fragile union. [Editor’s Note: George Soros has projected a Brexit will lead to a currency crash. Click here for a better primer of what's to come.] 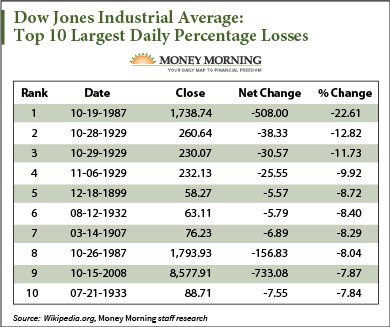 Stock markets around the world came crashing down, beginning in Hong Kong, spreading its tendrils west to Europe, and finally finding U.S. markets. (Note that Australia and New Zealand call this day "Black Tuesday" because of the time zone difference.)

Special Report: Spiking volatility can rattle investors, but it shouldn't. In fact, here's how you can make a killing when everyone else is panicking…

There are a few theories regarding the cause of Black Monday, but the most popular is program trading.

"Program trading" is a type of securities trading in which groups of 15 stocks or more are traded simultaneously based on preexisting factors via computer program. Investors use this method when they wish to trade a large number of stocks at the same time, or to take advantage of a window of price discrepancies between markets (arbitrage).

In the late 1980s, computer technology became more common, leading to a burst of program trading use on Wall Street. The public largely blamed program trading for blindly selling stocks as the market dropped, exacerbating the crash. Whether that was actually the case, or the sheer novelty of mass program trading caused a general distrust of it, is debatable. Some other theories on what caused Black Monday are overvaluation, illiquidity, and market psychology.

Oct. 26, 1987 – the Monday following Black Monday – marks the eighth biggest percentage drop. The value of all U.S. stocks fell $203 billion, an evaporation of wealth that, at the time, was only exceeded by the $503 billion drop a week earlier.

The second-largest daily percentage loss on the Dow is another "Black Monday," and it's followed by the third-largest drop on "Black Tuesday," on Oct. 28-29, 1929.

It appears we are always vulnerable to panics. The perceived causes always are different and hard to predict, except each "karma" consists of just the combination of factors that causes public confidence to decline. Mood gets negative and people ( everyone) become anxious, just like I sometimes feel when I read the news too often. Much news is not being widely reported. This is a cause for concern. Bullishness is so extreme that worrisome news is largely ignored.

For example, what is going on with HSBC Bank in England? They are refusing to give depositors large amounts of cash (5,000 pounds) if a withdrawl is requested in person. Even here in the states, they always ask questions if they don't know you ( recognize you ). HSBC debit card holders lost access to their money for a few days last month (conversion to new platform). Furthermore, it was reported that HSBC has a capital deficiency of around 95 million pounds. ( They may require a bailout by the Crown ). HSBC can't meet Basil II capitalization requirements.

US BANKERS can tell the public anything and who can prove its not true? Its their casino, not yours, after all. How about three investment bankers who have jumped out the window in recent weeks in London, Hong Kong, and in the U.S. Anybody read about that one? What's going on exactly? Another $ multibillion dollar bet gone bad?