Chalk one up for the good guys.

The IEX exchange, a new stock platform that launched Oct. 25 of last year, was designed to negate the advantage that Wall Street's high-frequency traders have over everyone else.

High-frequency trading (HFT) involves the use of very fast computers with very fast connections to sniff out what other traders are doing and buy or sell shares accordingly - all in milliseconds. 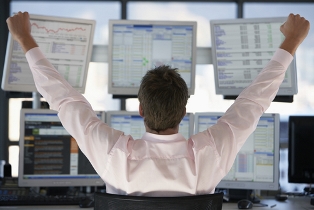 The IEX exchange defeats the advantage the HFT have by artificially introducing delays in the execution of trades.

And while volume at IEX is tiny - just 18 million shares out of nearly 7 billion traded daily - it has doubled since January.

"IEX is a great idea," said Money Morning Capital Wave Strategist Shah Gilani, editor of the Wall Street Insights & Indictments newsletter. "It's already having an impact. Eighteen million shares isn't even a blip on anybody's radar but watch it now. I'm willing to bet volume will double every quarter from now on. That's not an arithmetic gain - that's a geometric advance."

But what's so bad about high-frequency trading?

Those high-speed trades - which make up about half of all stock trades each day - get "in front" of other trades and change the price ever so slightly to their advantage. Although each HFT transaction nets only pennies, or a fraction of a penny, the computers conduct millions each day.

That adds up to billions in the pockets of the high-frequency traders - money extracted from the pockets of all other market participants, including retail investors.

What's more, because high-frequency trading is controlled by computer algorithms, a glitch can cause a market disaster, such as the "flash crash" of 2010, when the Dow Jones Industrial Average fell 1,000 points in a matter of minutes.

IEX Exchange CEO: "It's a Hole in the Bottom of a Bucket"

Brad Katsuyama, the chief executive officer of the IEX Group, discovered how high-frequency trading was harming other traders while running the Royal Bank of Canada's stock desk in New York. So he did something about it.

"We found a problem. It's affecting millions and millions of people," Katsuyama said in an interview on the CBS News program "60 Minutes." "People are blindly losing money they didn't even know they're entitled to. It's a hole in the bottom of the bucket."

Curiously, however, several Big Banks - such as Goldman Sachs Group Inc. (NYSE: GS) and JPMorgan Chase & Co. (NYSE: JPM) - known to engage in HFT have actually endorsed the IEX exchange. Gilani has an idea why...

Chalk one up for the ostrich heads under the sand.

The best-understood problems with HFT concern the fairness of the many new order-types, especially the conditional orders that may not represent honest intentions to buy or sell, and especially the priority ordering (in the bidding queues) that can be achieved by activating the trigger conditions of these esoteric orders.

Injecting delays (and here, please read "we'll hold your order or your results for a while to make sure you don't get a prompt execution") has to be the silliest approach to take. Unless you expect geometric growth in the credulity of Luddites, I don't see any reason to hype this turtle. Please review the Comcast ads for "S l o w I n t e r n e t" to appreciate the turtle reference.

Have to agree with Greg Jaxon on this one.
Am I missing something here on why anyone would want to join "The Slowskies" ?

I suppose I did'n make this clear in the story. The delays — and were talking milliseconds here — are only aimed toward the HFT folks, and designed to prevent them from gaming the system. It has no negative impact on other traders. If it were a terrible idea that only made things worse, Brad Katsuyama would never have used it in his IEX Exchange. Admittedly, it's counterintuitive, but Katsuyama has proven the method's effectiveness over the past several years (first at RBC, and now at IEX).

Speed is here to stay. Not everyone using the fastest access is fronting orders. Interesting that some of the largest participants in front running are now endorsing IEX. I think back to the Specialist era when the bid/offer was a 1/4 to a 1/2 and compare that to the pennies difference we have today.

Greg, Before condemning the idea of "controlled slowness" read the latest book from Michael Lewis which describes the evolution of this way to create a fair market. And, 1/3 of a second slower is not so bad is it?

It seems to me its not worth investing in the stock markets any more its one rigged market after another.We have had all these financial scandals and you think whats next.The powers that be will never stop this unless the punishment fits the crime pardon the pun they are laughing all the way to the BANK.

The game is rigged, from front running (think HFT) to painting the tape (think Goldman's $100MM "mistake" 8-20-13) and market makers influencing pricing (along with large institutional traders' block dumps), but smart investors can still make money in the current system if they know how to play the game via options and stop orders. A simple, permanent "fix" would be wildly unpopular, because it would take much of the profitable volatility out of the market, virtually eliminating wild intra-day swings. If trading was limited to IEX-type delays with a pricing spread based on real-time stock/business valuations (using multiple methods: book, adjusted book, discounted future earnings, etc.), speculation would still exist, but it would be based on sound fundamentals rather than hype (think Facebook IPO, etc.), and it would be supported by the health (or lack thereof) of the underlying company. Sure, analysts look at those figures, but much of the market is based purely on sentiment and speculation rather than pure fundamentals, allowing prices to move far beyond the realm of reason (up and down), as compared to the true value of the underlying company.