While the number of merchants who take Bitcoin is growing, actually finding a merchant who accepts Bitcoin hasn't been especially easy. Until now.

In a quiet announcement last week, Yelp Inc. (NYSE: YELP) said it had added a line for "who accepts Bitcoin" to its guide data. Yelp provides online data and reviews for about 53 million local businesses. 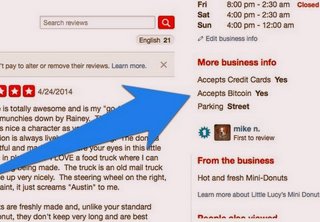 This development is a much bigger deal than it seems. With a major-name company like Yelp providing an easy way to find who accepts Bitcoin, it's a big piece of the infrastructure needed to make actually using Bitcoin more practical. And that will speed adoption of the digital currency.

It also doesn't hurt that Yelp draws plenty of eyeballs.

Some of those Yelp users may already be using Bitcoin, but a great many are not. But they'll see the line about whether a business accepts Bitcoin, and that could pique their curiosity.

Note: Stronger than steel, lighter than a feather, this high-tech "miracle material" will shape virtually every part of our daily lives by the end of this decade… This is a rare investment opportunity…

On its official company blog, Yelp explained why it added the information on who accepts Bitcoin.

"We're constantly thinking about how to make our business attributes more useful for consumers and businesses," the company said, comparing the information to such attributes as store hours and whether or not pets are allowed.

Yelp has added the Bitcoin option to the business owner tools on its website to make it easy for merchants to add the information to their listing.

Yelp also offered some thoughts on why it thinks Bitcoin matters.

"For those who haven't heard the buzz about Bitcoin, it's a new payment technology that allows consumers and businesses to make fast, secure and low-cost digital payments from any Internet-enabled device. Bitcoin also allows for consumers and businesses to transact without having to store sensitive data like a credit card number. Finally, like cash, Bitcoin's transactions are one-way, so businesses don't have to worry about chargebacks," the company said. "We're hopeful the introduction of the Bitcoin attribute will provide yet another way for consumers to connect with great local businesses."

As Bitcoin becomes increasingly popular, more people are going to want to know how to buy the digital currency. This Money Morning guide explains why it's not as complicated as it seems, what to avoid, and, most importantly, where to buy Bitcoin…

It seems to just confuse the general public. What happens to the gold standard? What will Congress handle this new currency?

I also have info, trade Bitcoin for OlympicCoin (OLY) on Mintpal, currently very cheap now. OLY only have 58 million coins in total and you can buy 1 million of them are now less than 1BTC … which means in a few weeks will be easily worth 1 million 10BTC! OLY developers working on new projects – that's all you need to know.