Over the next two decades in the United States, it’s going to cost $2 trillion to keep the lights on.

We’re talking about repairs and upgrades to the nation’s electrical grid, which means some of the best stocks to buy now are the companies that do that sort of work.

The situation is dire. After decades of neglect, we’re depending on an electrical grid that has components a century old or more – and much of the rest is based on antiquated technology. The grid is fragile and prone to failure – it’s downright scary. 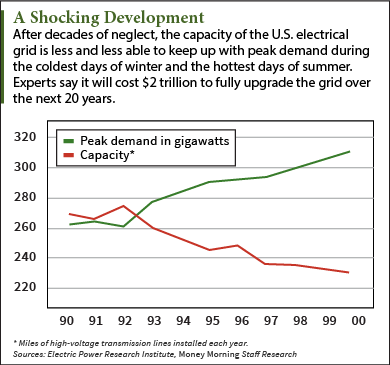 But from an investing standpoint, this is ideal.

The nation has no choice but to spend the billions it will take to ensure that the U.S. electrical grid remains reliable and has sufficient capacity to power our homes and businesses.

It’s not an exaggeration to say our very civilization depends on it.

Before we get to the stocks to buy, here are a few points that show just how severe this problem has become – and why the nation will spend whatever it takes to fix it.

A 2013 report on the state of America’s infrastructure by the American Society of Civil Engineers (ASCE) gave the nation’s electrical grid a lowly D+.

“Aging equipment has resulted in an increasing number of intermittent power disruptions, as well as vulnerability to cyber attacks,” the ASCE report said. “Significant power outages have risen from 76 in 2007 to 307 in 2011. Many transmission and distribution system outages have been attributed to system operations failures.”

At the same time, the tired old grid is getting even more stress as demand for electricity rises along with the population. The U.S. Energy Information Administration has estimated that electricity demand will increase 8% to 9% by 2020.

One issue that has already exposed the weakness of the grid is how it performs at times of peak demand.

“We plan our system around the extremes, when people are trying to use electricity in extremely cold weather or extremely hot weather. That’s when the system has to be able to operate, and operate very well,” explained Nick Akins, Chief Executive Officer of American Electric Power Company Inc. (NYSE: AEP) in an appearance on Fox Business’ “Opening Bell” program. “The polar vortex

showed us that during those periods it was very important for us to make sure that we are able to satisfy that demand, and it became very close as to whether we could do that or not.”

Further complicating matters is, ironically, America’s wealth of energy sources, from fossil fuels like coal, oil, and natural gas to nuclear to renewables like solar and wind. It’s not only a capacity problem; the technology of the electrical grid also needs to be improved so it can manage all these types of energy sources, particularly the intermittent nature of renewables.

“Our industry needs to spend $2 trillion over the next two decades just to refurbish the existing grid and put new resources in place,” Akins said. “Our industry is spending over $90 billion a year in doing that.”