The Dow Jones Industrial Average soared to a new intraday record today (Monday) as shares of small-cap and technology stocks rebounded from their recent losses. Caterpillar Inc. (NYSE: CAT) continues to drive the exchange higher, as it is the only stock on the Dow that is up double digits this year. 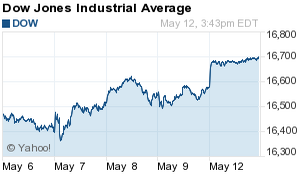 Now here are the top stories from today's trading: