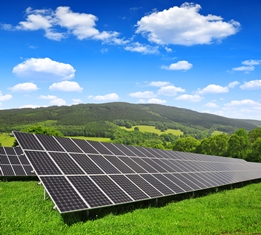 "Solar power is renewable, it's great for the environment, and it can be produced right here at home - safely insulated from the ups and downs of global politics and market bottlenecks," said Money Morning's energy investing expert Dr. Kent Moors.

But solar power's high price has prevented customers and utility companies from going green with solar. That has also kept solar companies from being good stocks to buy in the energy space.

Now that could be about to change. According to Moors, the prospect of affordable solar power may not be as far off as it once was...

The Solar Power Industry Moves Ahead

While solar energy is viewed as "greener," it has always been more economical for companies to turn to oil and natural gas. But that could be about to change, according to an April report by the investment bank Sanford Bernstein.

The report states that solar PV (photovoltaic systems that use sunlight to generate electricity) prices are now lower than oil and Asian liquefied natural gas (LNG).

"For these [developing Asian economies], solar is just cheap, clean, convenient, reliable energy. And since it is a technology, it will get even cheaper over time," Bernstein's report states. "Fossil fuel extraction costs will keep rising. There is a massive global market for cheap energy, and that market is oblivious to policy changes" in China, Japan, the European Union, or the United States.

"The increased use of solar power in China, developed Asia, the United States, Europe, and Australia will likely serve to reduce natural gas demand as well," Moors said.

"Grid parity is the point at which powering your home with solar is on par with what you could purchase from the grid," Moors said. "Reaching grid parity is the Holy Grail for solar power."

Another issue that has always kept solar prices high is storage. But companies have been looking for innovative ways to store solar power and eliminate this problem.

For instance, the California-based company SolarReserve LLC has been working on a revolutionary "molten-salt energy storage project" that is a 110-megawatt (MW) project with a 540-foot-tall power tower.

"Flowing through alloy tubes at the top of the tower, the molten salt retains the energy produced as heat, ranging from 500 to 1,000 degrees," Moors said. "Even at these high temperatures, the molten salt remains liquid, meaning it can double as a way to transfer and store energy."

According to the company, this technology can create 10 hours of full power storage, which can be used to provide power on demand. That's exactly what "normal" power plants do.

That one plant alone is expected to generate enough power to serve 75,000 homes during peak electricity periods.

"The storage technology also eliminates the need for any backup fossil fuels, such as natural gas, which are needed in other applications to keep the system going during times of either no or low sunshine," Moors said.

Storing solar power is so important, because it allows utility companies to power homes and businesses any time of the day or night, instead of only when the sun is shining. That prevents waste and keeps costs down.

While conventional solar power is closer than ever, Moors cautions investors from thinking that oil and natural gas will be big losers due to solar power's rise in 2014. That said, the prospects of solar power reaching grid parity are much stronger now than ever before.

These developments mean one thing for investors: There are solar stocks to buy now that are about to soar. Many of the best investments can be found in developing Asian economies.

Here's a look at three setting up to be big long-term solar winners...