Stock Market Today, May 15, 2014: The Dow Jones Industrial Average slumped as many as 200 points on Thursday on lukewarm housing numbers, poor retail earnings, and a sell-off in small-cap stocks. 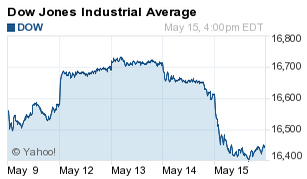