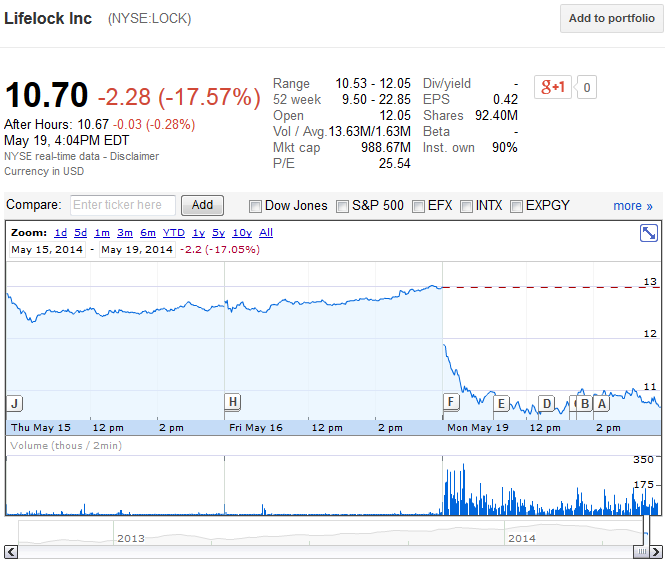 In December 2013, Lifelock acquired Lemon Inc. for $42.6 million. The Lemon Wallet, which was renamed the Lifelock Wallet post-acquisition, is an app that allows consumers to easily replicate and store a complete digital copy of their personal wallet contents in a single location on their smart device. It serves as a record backup and additionally allows the on-the-go use of identification, credit cards, ATM, insurance, and loyalty cards.

On Friday, LOCK Chairman and Chief Executive Officer Todd Davis posted that his company was temporarily withdrawing the mobile app due to - embarrassingly - security issues.

Note: Western civilization could easily come to an abrupt halt from a terrorist cyberattack. Scary, yes. But it also means that the companies who can repulse those attacks are in for enormous paydays...

He also noted that there is no indication that any consumer data had been compromised, but refreshingly stated "we believe this is the right thing to do." The company is developing a new version of Wallet that will meet "highest level of PCI compliance." It's intended to launch as soon as possible.

LOCK stock closed at $12.98 on Friday for a 3.02% daily gain, but saw the effect of the announcement today in the form of a double-digit stock market crash. Today's drop followed a tough quarter for the company, which suffered from losses through March and April alongside several other momentum Internet stocks.

NEXT: If enough Main Street investors learn to spot and use these three rules, Wall Street will find itself at our mercy. And what a day that will be. Let's examine each of the three, starting with the basic building block: jobs...

This was such a disaster for LifeLock… and it looks like they're dropping right back down to their July lows, too, even after their brief recovery back in November. It'll definitely be interesting to see where they go from here.