Stocks today were all up - the Dow Jones Industrial Average hit a new intraday high and the Standard & Poor's 500 Index hit its 16th record high of the year. 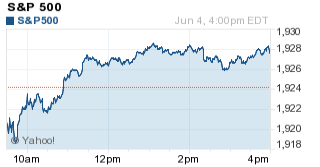 Now the top stories about the economy and stocks today:

Now our experts share some of the most important investment moves to make based on today's market trading - for Money Morning Members only (if you are not already a Member, sign up for free right now and get access to our 30 market analysis reports for 2014):