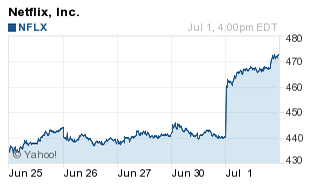 Fueling the gains and volume spike for the on-demand Internet streaming media company was a ratings upgrade and price target boost from influential Goldman Sachs. The investment bank boosted its rating on NFLX to "Buy" from "Neutral," and hiked its price target to $590 from $380.

Hot Stocks 2014: Why NFLX Was Upgraded

Goldman wrote that NFLX will "drive sustained outperformance" as "subscriber growth will continue to exceed expectations." Netflix's addressable audience of subscribers will more than double over the next three years as the company adds new markets, the firms' analysts noted.

The firm also views the market for children-friendly content as a likely area of growth for the company.

"Following the loss of Nickelodeon content in 2013, Netflix has made significant investments in kids' content through deals with Disney (NYSE: DIS), DreamWorks (Nasdaq: DWA), and Mattel (NYSE: MAT) most recently, which could create a powerful niche for Netflix to compete and create original content," Goldman wrote.

The increasing use of mobile devices among today's youth also bodes well for Netflix.

From Goldman: "Kids are spending 3X more time each day on mobile devices, compared with two years ago, and kids' cable networks are reaching almost 3X the number of households as Netflix. Further, demographics data show that only 3% of Netflix's current users are kids, which leads us to believe that (1) the kids opportunity is large, and (2) Netflix is underpenetrated…"

Another driver for Netflix is the popularity of its exclusive, critically acclaimed and award-winning adult shows like "Orange Is the New Black," "House of Cards," and "Arrested Development."

But, as we pointed out earlier this year, it's much more than programming that will continue to boost NFLX…