Gold prices today (Wednesday) finished back over $1,320 an ounce after the release of the latest U.S. Federal Reserve minutes, and amidst turmoil in the Middle East. Our new gold price chart reflects the current June-July rally. 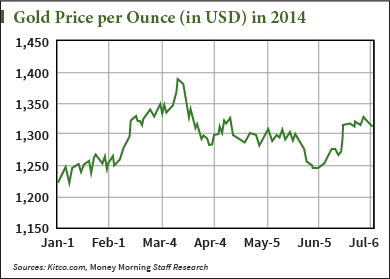 Gold prices have rallied with a 9.5% gain this year through the close of yesterday's session and are on track to tack on more gains today.

Per Yellen's previous comments, the Fed will likely end its monthly bond-buying program in October. There were no new insights on when the Fed might raise interest rates.

"It was in line with expectations. There were no surprises, really," Citi Institutional Client Group's futures specialist Sterling Smith said to Kitco.

Geopolitical tension in the Middle East is the other major factor contributing to gold's recent gains. Here's how it's shaping the yellow metal right now...