It was August 13, 1902, and upstate New York's A.B. Bouvier found himself far from civilization – in Ontario, Canada's Mine Centre district. He was there to check out some mining property. And as he recounted in two letters to a friend of his – a woman named Emma – the trip hadn't been an easy one.

The two letters are part of a small group of historic documents that I've amassed through the years. The two scrawl-covered pages tell quite a story. And the collector I got the notes from filled in some of the other details.

The first letter tells of a trip across Lake Superior – one that left everyone on the boat (except Bouvier) feeling seasick.

"Lots of the passengers were so sick they could not get up," Bouvier wrote. "I managed to get to breakfast and that was all."

The rolling and pitching Great Lakes boat trip turned out to be the easiest part of his journey north of the border. It illustrates the hard work involved with locating an opportunity.

The lake steamer got Bouvier to the Mine Centre Hotel. But it didn't get him to his objective: the Log Cabin Gold & Copper Co. As the second of his two letters describes, this second leg of his journey was equal parts adventure and sheer terror. 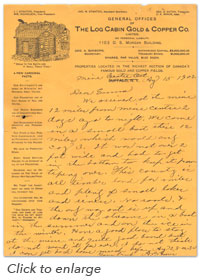 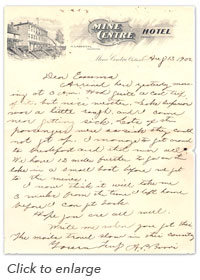 We arrived at the mine 12 miles from Mine Centre [tonight]. We came in a small boat those 12 miles which would only carry 3. It was not over two feet wide and [we] had to get in the bottom to keep it from tipping over. This country is all timberland for miles and plenty of small lakes and rivers. No roads. And the only way out is up and down the streams in a boat in the summer and on the ice in the winter. Have a good place to stay at the mine and quite good board (food) but do not want it forever. I do not think I can be home much before Aug. 28 or 30.

History – at least not the history that I have – doesn't tell us whether Bouvier invested in the mining project… or, if he did, how that mining project worked out.

But in an era when mining swindles were one of the more popular strategies for separating folks from their hard-earned greenbacks, the two letters do seem to show that Bouvier was a sharp guy… what we'd probably refer to as an "informed investor" in the financial parlance of today.

The Art of Due Diligence

I'm not exaggerating about the proliferation of mining scams, and the risks associated with investing in miners in general – especially so-called "junior miners." Growing up I often heard my grandparents – my Dad's folks – make whispered references to a Canadian gold miner they'd invested in… references that were usually accompanied by some wishful-thinking-type comments to the effect that the shares "could still be valuable… someday."

When my Dad and I cleared out their house to get it ready for sale in 2007, we found the share certificates. And we did our own "due diligence."

Sure enough… they were worthless. As my Dad, William Patalon Jr., recalled yesterday, when the mine was dug there wasn't enough gold to warrant further operation.

My grandfather, William Sr., was a tough-as-nails railroad man, a machinist with the Lehigh Valley Railroad. And both he and my grandmother, "Grandma Anna," were true products of the Great Depression… meaning they were usually conservative and cautious when it came to finance. Right to the ends of their lives, they both avoided debt like it was Satan incarnate and would always pay cash for a new car or other purchase.

So it had to be one heck of a "salesman" who induced them to wriggle out of this cautious financial mindset to plunk part of their savings down on a mine they'd never seen and really knew nothing about.

That family story is part of the reason I was so taken with Bouvier's story. Unlike my grandparents, you see, Bouvier went to see for himself.

But the two historic letters struck a second chord with me: That whole "go and see for ourselves" mindset reminded me of similar stories that two of our own guys here at Money Map Press have related to me.