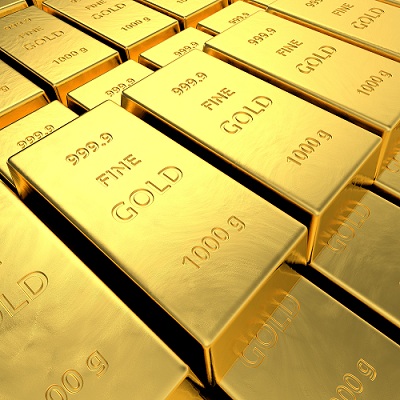 Sending the yellow metal sharply higher Thursday was safe-haven and risk-off demand amid disturbing developments in Europe and uninspiring data out of China.

Worries over the financial health of a chief Portuguese lender sent European markets swooning Thursday (and stirred up memories of the Eurozone sovereign debt crisis that rattled markets in the summers of 2011 and 2012).

"People will shoot first and ask questions later when news like this hits," Lawrence Creatura, a fund manager with Federated Investors, told Bloomberg. "The concern of an event like this is always determining whether it's occurring in isolation or whether it's the first domino. It's a classic flight to safety across the equity, commodities, and bond markets."

In reaction, Portuguese government bonds sold off. The yield on the Portuguese 10-year note rose to 3.885%, up 0.15 basis points.

The rout spilled over into U.S markets. All three major benchmarks dropped 1% or more in morning trading.

Further weighing on investor sentiment Thursday was data showing Italian industrial output fell 1.2% in May from the prior month. That was the largest monthly drop since 2012. The news sparked fresh worries about Italy's limping economy.

Additionally, overnight trade data from China was disappointing. While exports from the Asian nation increased 7.2% year over year in June, the read was handily below expectations for a 10% rise.

The gold fear trade was also stoked Thursday from market participants keeping a keen eye on the Middle East.

Earlier this week, Israel launched missiles on the Gaza strip. The situation grew more acute Thursday as Israel dramatically escalated its aerial assault in Gaza, striking 320 Hamas targets. Hit were underground tunnel networks and rocket-launching sites. Over the past three days, some 750 targets have been hit in the enormous offensive that has left at least 80 Palestinians dead.

The grave situation in the region has been likened to a powder keg; it is feared that it could spark unrest in other parts of the Middle East.

And there's even more driving gold prices higher, as this chart shows…