Heading into the week silver prices were cooling off from a June rally, potentially signaling the start of the summer doldrums, when the white metal generally sees weak trading.

Wednesday marked the release of last month's Federal Open Market Committee (FOMC) meeting minutes, which caused silver prices to push back in the face of low expectations. Just before the 2 p.m. EDT release of the Fed minutes, silver was trading down 0.8% on the week at $21.03 an ounce. Since then, silver has shot up as high as $21.53, a 2.4% surge.

Silver hasn't seen prices this high since March, when it was topping out a bullish month for traders. 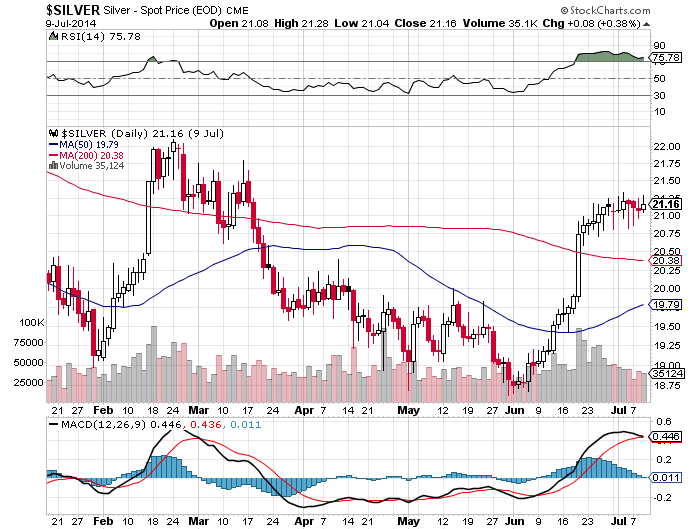 Investors have been listening closely to the words of the Fed lately, with Fed Chairwoman Janet Yellen's mention of potential interest rate hikes or disregard of the prospects for inflation moving silver prices in both directions. The most recent FOMC minutes did little else than reaffirm Yellen's words in last month's post-FOMC meeting press conference where she stayed firm on a commitment to keep interest rates at their near-zero level for a "considerable time."

And the silver market responded in kind, trading up on the day and carrying that momentum into this morning.

In June's press conference Yellen's "downplaying of inflation," as President and Chief Operating Officer (COO) of Asset Strategies International in Rockville, Md., Richard Checkan told Money Morning, was a big part of the June rally, which saw a jump following the meeting.

"There are no real supply and demand changes," Checkan said. "I think it's more a reaction to the sound bites."

Silver, like gold and other precious metals, is seen by investors as an inflation hedge, and at a time when the Fed has kept rates low and pursued a highly accommodative monetary policy, the economic environment is ripe for an accelerated increase in prices.