Tesla Motors Inc. (Nasdaq: TSLA) announced today (Wednesday) that it will be halting the production of its Model S sedans for two weeks so that it can upgrade its Fremont, Calif., factory and begin manufacturing its second line of vehicles: the Model X. Tesla stock rose 2% on the news in morning trading. 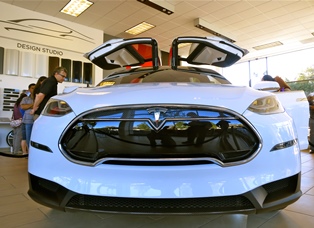 The Model X - the highly anticipated follow up to Tesla's signature Model S - is a crossover SUV designed to "blend the best of an SUV with the benefits of minivan." In classic Tesla fashion, the car will be flashy. "Falcon-wing" doors on the car will open up, rather than out.

The addition to the factory will cost Tesla approximately $100 million and will add 25 robots to assembly lines.

"This represents the single biggest investment in the plant since we really started operations and enables us for higher volumes," Tesla spokesman Simon Sproule told Bloomberg. "It gets us ready to build X and to do it on the same line as the S."

While vehicle production numbers will be stunted in the short-term, Tesla says that the upgrade will increase production by 25% when the factory reopens.

And that's important for Tesla, because company officials have set high production goals this year.

In May, Chief Executive Officer Elon Musk announced that Tesla was producing around 700 vehicles per week, but was hoping to reach 1,000 by the end of the year. This week, Tesla officials said that production is currently 800 vehicles a week.

Aside from the Model X, Tesla is also hoping to launch a line of vehicles called the "Model 3" by 2017. The Model 3 will be a smaller and more affordable vehicle. Currently, Model S sedans begin at $71,000. A Model 3 is expected to cost about half that. Tesla has not announced a retail price for the Model X.