Gold prices have notched a 7% rise year to date as of late July, but the yellow metal has had its fair share of ups and downs in 2014, as shown in this gold price chart. 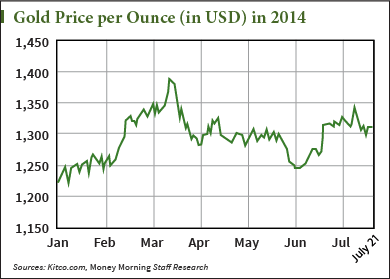 Gold mining stocks have followed a similar path, with a rise in February and a slump into April. But their year-to-date gains have delivered some eye-popping returns for investors.

To find out what's driving gold-mining stock gains higher than the physical metal's climb, we turned to Money Morning's Global Resource Specialist Peter Krauth. He told us exactly what's behind this uptrend in gold miners – and if it's something that investors can profit from today…

The Forces Driving Up Gold Mining Stocks in 2014 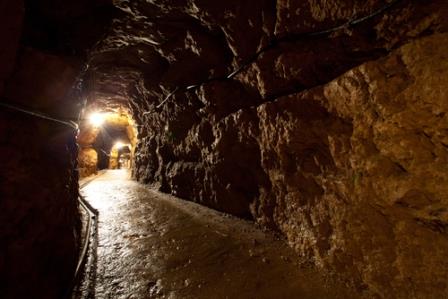 "The past couple of years have seen considerable pressure on most gold equities, thanks in large part to a declining then consolidating gold price," Krauth said in April. "That became a major challenge to gold miners as they've tried to grow production despite falling gold grades."

What's more, commodities prices fell over the last three years, so many gold mining companies took to costs with a machete and slashed wherever possible, to weather the storm for an extended rout in prices.

"Gold mining companies had to downsize staff, axe projects, and even rationalize selling non-core assets," Krauth told his Real Assets and Returns readers on July 7."As a result, now they are much leaner, and will be much more profitable when commodities prices rise again."

While many gold mining stocks faltered in the past few years, those companies that managed to strengthen operations during the down gold market and commodities slump were poised to capitalize on gold prices' rise in 2014.

And this move isn't gold-specific, which is good for the entire mining industry…