But there is little supporting this rise for the long term.

They are so similar, in fact, that at one point Zillow filed a lawsuit against Trulia, claiming that TRLA's property valuation tools infringed upon Z's patent of their signature "Zestimate" home value estimation service.

But their business purpose isn't the only thing these companies share; there's a more damaging common factor…

The Problem with the Z-TRLA Deal

What many traders and industry analysts have noticed and commented on is that behind this deal – and surging share prices – are two money-losing businesses. 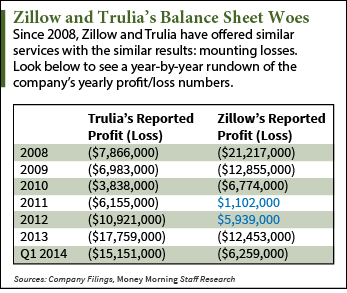 That's why both companies are awash with short sellers – traders taking out bets that the company's shares will fall – with 31.8% of Z shares and 36.7% of TRLA shares floated in short positions, according to FinViz.com.

Similarly, TRLA has an accumulated deficit of $64.9 million, and since 2008, hasn't had one profitable year. The second-largest online real estate website has seen a steady increase in losses since 2010, topping out in 2013 at $17.8 million in the red. Already in the first three months of 2014, TRLA is reporting losses of $15.2 million.